You are here: Home>New contributions>St Nicholas Hall: “a meeting place for all ages and ranks”

St Nicholas Hall: “a meeting place for all ages and ranks” 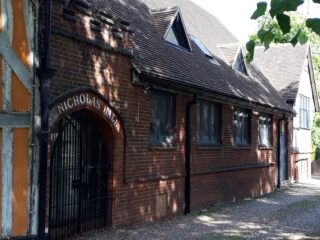 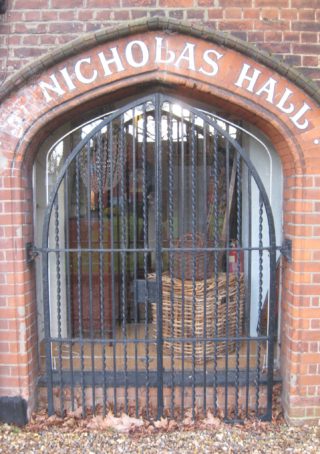 At the end of the 19th century, Hertford’s St Andrew parish was in need of a hall for holding meetings, entertainments and social gatherings. Estimates put the cost of building such a facility at £1,000 so the Rector, the Rev. Canon Wigram and his parishioners set about fund-raising.

Most of the money (£400 3s 11d) was raised by a 3-day grand bazaar which took place in 1891. More funds came from the town’s connections in Hartford, Connecticut, from a series of events by the Entertainment Society and from a mortgage on the property, underwritten by Lord Cowper.

The site of the new hall was just to the side of St Andrew’s church, on land behind the Old Verger’s House, which fronts St Andrew’s Street. The two 15th century cottages on that spot were brought from Lord Salisbury and demolished. The architect, Mr E. Wigram, designed a building following the pattern of a Medieval aisled hall, in the Arts & Crafts style. The foundation stone laid in July 1891.

The name of the hall commemorates the ancient parish of St Nicholas, which had been unified with St Andrew’s early in the 18th century. The old church of St Nicholas once stood in the area of present-day Maidenhead Yard, off Maidenhead Street, near the River Lea.

In the afternoon of 5th April 1893, a large number of parishioners, with Rev. Robert Rutland (Christ Church) and Rev. John Mansell-Pleydell (Bengeo), gathered for the formal opening of the new hall. Miss Erica Robertson of Sele Grange, opened the doors with a silver key and welcomed everyone in. Once seated on the stage, she spoke of her hope that the present and future generations of “all ages and ranks might meet together [at St Nicholas’ Hall] for their common good.”

That evening a parish supper was held for over 100 people. The hall’s success was toasted, followed by similar celebrations for the driving forces behind its creation; the Rector, the architect, the builders, the Entertainment Society and the residents of Hartford, Connecticut. The Mercury reporter at the dinner wrote, “During the evening several songs and instrumental pieces were rendered by members of the Entertainment Society and a very enjoyable evening was spent” (Hertfordshire Mercury 8th April 1893).

St Nicholas’ Hall continued as a place of entertainment and education for the next 70 years. In 1950 its special character was recognized when it received Grade II listing. Local groups, such as the Company of Players made it their home in the 1960s, with performances of full-length plays by John Mortimer and Jean Cocteau.

By the late 1960s time and growing expectations had caught up with the hall. It lacked the modern facilities required and dry rot was attacking the structure. Over the next few years, the hall and Old Verger’s House were incorporated, becoming Beckwith’s antiques shop. An attic floor was added to the original hall design.

In recent years the shop has reduced in size and currently hosts an art gallery. The rest of the building sought listed building consent to become residential in 2020.