...then and now photographs of Hertford

I am a relative newcomer to Hertford …1971; not born & breed in these parts. I am an out-comer/in-comer from Edmonton on the outskirts of Greater London. These photographs were taken circa November 1973. I had acquired a new camera and I wanted to try out its capabilities.
…and there’s more further down 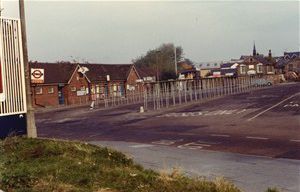 This is how I remember the Hertford bus station at the time; a large, rambling open space with nary a bus in sight. The bus stops in the centre consisted of circular poles with a flat roof; no sides. They offered no protection from driving rain. As I remember, the buildings around the outside were a higility-pigility collection of old brick-built structures. The wasteland in the foreground was close to the entrance of the arcade which joined Bull Plain to the bus station. 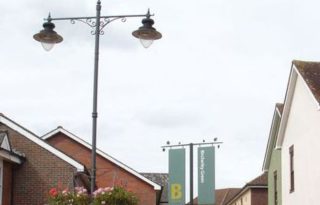 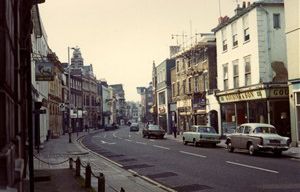 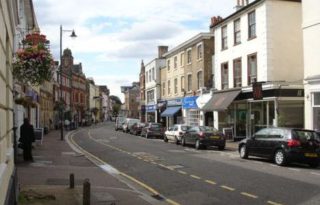 Fore Street has not changed very much in the intervening years, since most of the frontages are listed buildings. The photograph was taken in front of the offices of Breeze & Wyles, solicitors. The Dimsdale Arms, on the left-hand side, used to be a public house. The Shire Hall overshadowed life in the centre of Hertford and the Corn Exchange was a dominating feature of Fore Street. Gaveds (on the right-hand side) was an electrical outlet store and Cousins & Sons was a furniture shop in those days. This part of Fore Street was (and still is) a one-way street. Finding a parking place was never a problem in those days. Look at the style of the cars; very different to those that park there now. 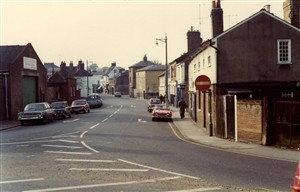 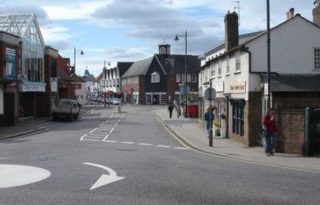 This photograph was taken from the wall of the Christ’s Hospital School looking down Railway Street. Notice that this was a one-way street at the time, as indicated by the arrows on the road. The Quaker Meeting Hall was on the left-hand side. In the distance in the centre is the crossroads which was controlled by a set of traffic lights. On the corners were a gardening, DIY & pet shop, an off- licence called The Punch Bowl and Pearce’s the bakers. Cars were allowed through the road from Parliament Square. In fact, there was a small place for parking cars outside Graveson’s, the only department store in town. Coming back on the right-hand side, there the car is parked in front of a set of scaffolding railings. This delimits the gap between two buildings, which was used for market stalls on Saturday as well as part of the bus station. Talking of markets, there was a covered market along Market Street, to the rear of the Corn Exchange. Closer on the right-hand side was a set of shops, one painted blue. This was one of the town’s fish & chip shop. Warren Place is the closest building on the right-hand side. 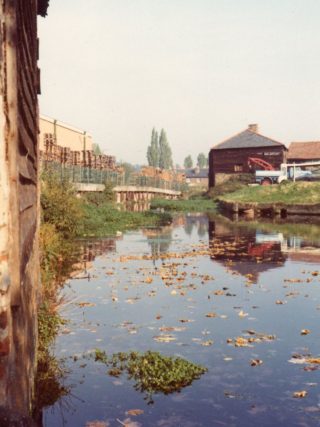 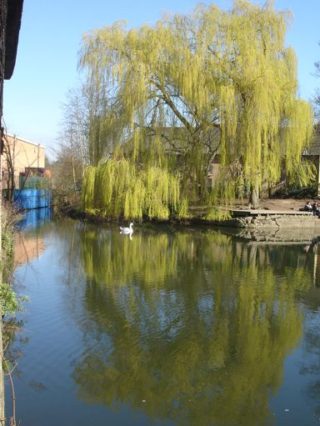 1973: The end of the River Lea Navigation Canal is reminiscent of the “…dirty old river…” which was the subject of the 1967 Kinks hit, “Waterloo Sunset”. This is the place that was the original crossing point of the River Lea and where Hertford got its name.  A burgh (fortified places) was founded by Edward the Elder to the north of the River Lea crossing at “Heorutforda” (Ford of the Harts) to defend against Danish advances. The place is also shows the backyard of the McMullens local brewery. The wooden pallets are stacked by the side of the river. The river itself is clogged up with various plants, leaves and weeds.

2011: The scene is now dominated by a huge willow tree alongside where the barges turn and moor up. The river is free of weeds and is home to a solitary swan. The pallets have disappeared from the back of the McMullen’s brewery to be replaced by a solo AK lorry. 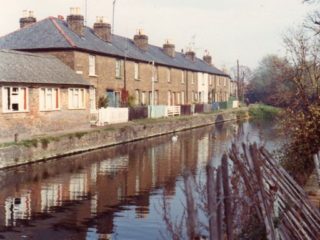 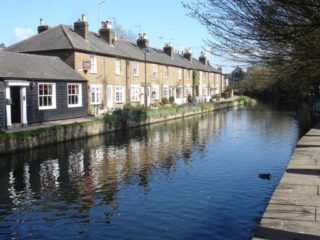 1973: Time seems to have passed The Folly by; nothing much has changed, other than the colour of the lamp-post.  ‘The Barge’ public house has a brick exterior with 3 windows. To the right-hand side is the back of the bus station. This side of the river shows what it was like before the precinct on Bircherely Green was built. I suppose the paling fence is to stop people falling in.

2011: The main change is that ‘The Barge’ public house has acquired a new side entrance and lost one window. Technology has invaded this backwater with the installation of satellite dishes. The paling fence has been replaced by stone slabs.  In the distance, Jewson’s yard has been replaced with a housing development. 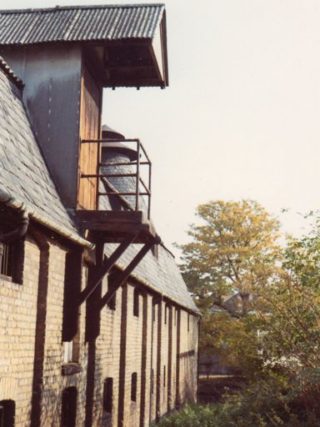 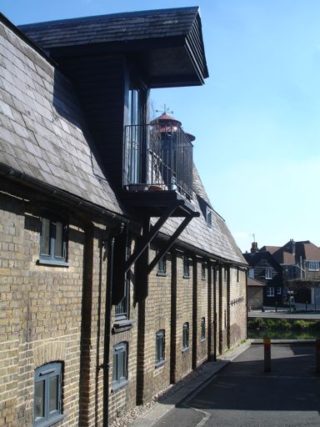 1973: The malting house near Old Cross was once a derelict building. Nicholas Lane was overgrown with weeds. In distance, at the end of the building is the River Lee. Over the river is Dolphin Yard.

2011: What a transformation! Although the outside façade remains the same the inside has been turn into luxury flats with new window frames. The brickwork has been cleaned up and the wall has been repointed. The balcony has been provided with railings to meet Health & Safety regulations. In the distance is the new library complex in Dolphin Yard. Nicholas Lane itself has been tarmaced and new bollards have been installed to prevent cars rolling into the river.