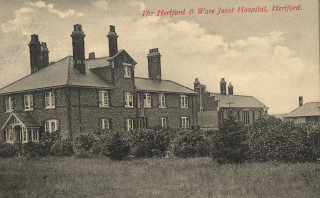 The hospital which used to be on Stanstead Road/Gallows Hill, Hertford
Hertfordshire Archives and Local Studies

I recently got the chance to look at some old OS Maps while doing work experience with Hertfordshire Archives and Local Studies at County Hall, so I began by looking at my road.

In 1880, the land between Stanstead Road and Ware Road used to be the site of Hertford Union Workhouse, perched next to a chalk pit which is likely to have been used by the workhouse. The 1898 survey saw the addition of an infirmary and infectious hospital on the same site of the workhouse. By the time of the 1923 Ordinance Survey Map the Union Workhouse had been converted into the ‘Kingsmead school for mental deficients’, whilst on the other side of the chalk pit an isolation hospital had been built. In 2012 the ‘school for mental deficients’ is now where the old police station site is and the chalk pit which was next to the work house is currently where Kingsmead pre-school and Wheatcroft Primary School are situated.

After the isolation hospital was knocked down, a new hospital site was built at the top of Gallows hill, which was there on the 1998 OS Map of the area, but by 2005 it had been turned into the estate known as ‘Lilbourne Drive’.

I think that it is really fascinating to see how one small area of Hertford experienced such drastic changes over the relatively short period of time of just 40 years, from a Work House, to a ‘school for mental deficients’, to a police station which is now disused, alongside a primary school.