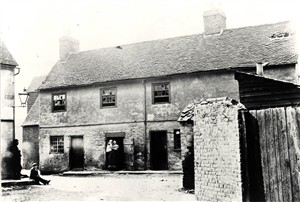 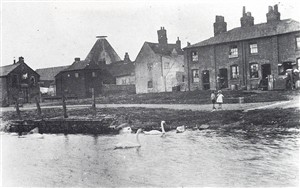 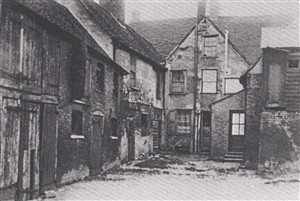 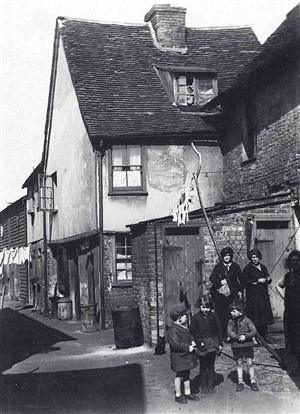 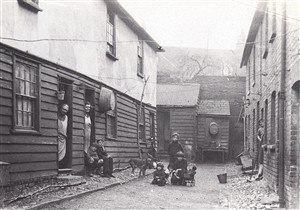 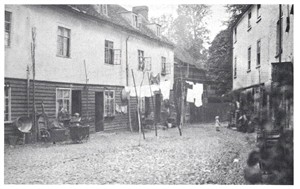 In the 19th century a large extent of the town’s housing was very poor.  There were two outbreaks of cholera in 1832 and 1849 which badly affected the crowded courts and yards in the town centre.  After a public health report in 1850, a sanitary committee was established.  Work to improve sanitation was immediate but the added problem was overcrowding.  In some cases, there were eight or more people sleeping in a small room.

The report revealed the state of the town nd the terrible conditions in which people were living:- “…cesspools under human dwellings and the effluvium so offensive that parties could not occupy their lower rooms; dung-heaps, foul water, excrement soaking into houses, soil from privies soaked into wells,accumulation of offal from slaughterhouses…”. Not surprisingly, disease was widespread.   The town hall’s response was that it was a not a parish surveyor’s duty to clean the highway, only to maintain it.  A ditch in Ware road was used as a common sewer to the gaol and was a source of malaria.  Typhus was common and there was a fatal case of cholera at Providence Court in Railway Street.

It was realised that this could be remedied by improving the water supply, drainage and cleansing the streets.   Two men were paid 9s per week to cleanse the streets and remove filth in barrows.   Providence Court had 16 houses, lived in by 68 people who shared 4 privies over one cesspool. (Ironically, the site of the court is now a group of new houses in a courtyard style called Providence Place).  Many landlords refused to acknowledge the problem.  Lord Salisbury of Hatfield House was the largest owner of cottages in the town and several complaints were made against him, especially about the sub-standard privies his tenants were using.  They were basically tubs on wheels and the sewage was emptied into the river.  He was invited to inspect his cottages to see for himself but said he was too busy.   A landlord named Mr Kimpton owned a few cottages without sufficient sanitation but was not prepared to share his toilet with anyone.  At a Board of Health meeting, he said: “I have a privy for my own use, to which I allow no-one else to go.  I carry the key in my pocket.  I am very particular about that.  I think it has not been emptied for 20 years.”

Even by the early 20th century, many of Hertford’s poor were still crammed into tiny cottages without adequate sanitation.  One of the most notorious areas was Butchery (or Butcherly) Green which was not completely demolished until the 1930s. (Bircherley Green shopping was built on the site).   A newspaper noted in 1919 that a visitor to Hertford would not realise what hardships occurred behind the picturesque facades.  On staying longer, the truth became evident.  Particularly, it referred to the Butchery Green area and its maze of little streets.  Paradise Row and Green Street were not as nice as their names implied.

In 1850, Maidenhead Yard had 20 houses, 84 people with 4 privies standing over the river above the water-works.  Improvements were not made until 1935.  The yard was behind the Maidenhead Inn, now the site of the present Woolworths.   Under a carriage arch in St Andrew’s Street stood Oakers Buildings (also known as Poets Corner) which were built in the 1830s.  They were owned by a Miss Oaker who, for over 40 years received regular letters from the Board of Health about the state of the cottages and lack of clean water supply.  In 1885 they were declared unfit and condemned but were not demolished until 1933.  Despite this, the occupants pleaded for their homes to be spared.  They said they were happy with their situation and proud of their homes.  A petition to the council in 1932 said:   “We humbly beg the council to leave us in the homes we love on the grounds of common humanity in the name of socialism (under whose aegis we exist) and in the name of Christianity”.

They were given a month’s notice but many refused to quit until the last minute.  The owner was concerned at losing income and the tenants were worried about higher rent in the new houses in a less accessible part of town and where they could keep stock or animals.   One elderly woman on being removed to more pleasant surroundings became depressed and begged to be taken back to her yard.  In another case, an elderly man, persuaded by his employer to “better himself” also left “the court”.  In 3 months he insisted on returning or “he would die”.   In total, 132 houses were recorded as unfit for habitation in Hertford and were demolished in this period.  Many of the tenants were re-housed in the new estate at Horns Mill.