You are here: Home>Towns & Villages>Hertford>People>The Trials and Tribulations of Mr. Savage

The Trials and Tribulations of Mr. Savage

33, Fore Street next to Corn Exchange
Hertfordshire Archives and Local Studies
These buildings stood on the site which was bequeathed, with the yard behind, to Hertford's Poor Estate, a local charity. It was decided by the charity to build a post office on the site and lease it to the government as a way of gaining income on their property. The high building on the right is the Dimsdale Hotel and next to it is the Talbot Arms, later rebuilt and now The Decorated Room. The shop of Mr Savage, cooper and basketmaker, was demolished to make way for the new Post Office. On the left of this picture is the entrance to Paradise Court. Such courts existed off all the main streets of the town.
Hertfordshire Archives and Local Studies/Mr Elsden 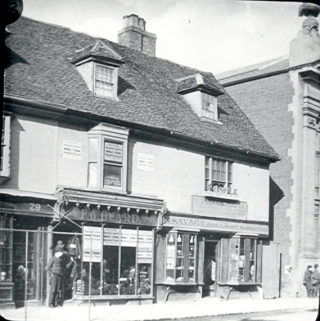 33, Fore Street next to Corn Exchange

In 1881 the shop next to the Corn Exchange, number 33, was being run as a cooper & basket maker by George Albert Savage.  George had been baptised on 10th April 1853 at St. Andrew’s Church. At that time he lived with his parents, Solomon & Martha in St Andrew Street.  By 1871 George was a jobbing gardener like his father.  Somtime in the next ten years he trained as a cooper.  In 1881 he lived above the shop at number 33 with Sarah, his wife and Edward, their two years old son.  Although on the night of the 1881 census, Sarah was not at home and George & Edward were being looked after by Ann Brett, 16 years old from Brent Pelham.

Around 1890 this building along with the shop next to it was demolished to make way for Market Street. 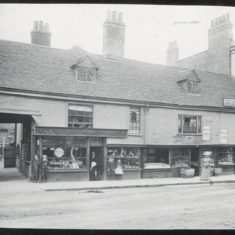 Presumably because of the demolition George moved across the road to  48, Fore Street,  shown opposite.  Probably the man standing in the doorway is George.  Unfortunately for him  these buildings stood on the site which had been bequeathed, with the yard behind, to Hertford’s Poor Estate, a local charity. The charity decided to build a post office on the site and lease it to the government as a way of gaining income on their property.  So again his business was demolished this time to make way for the new Post Office.