You are here: Home>Work>My Journey to Work

My Journey to Work 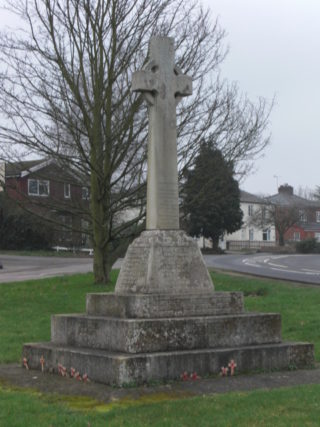 The east end of Fore St. before Gascoigne Way was built 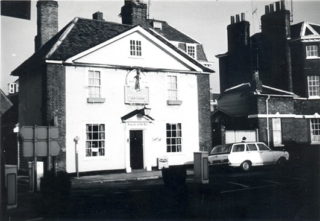 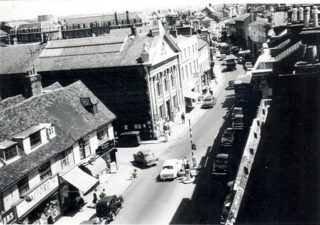 Some of the staff travelled to work by car.  Some, who lived outside Hertford came on the bus or on a bicycle.   Some walked to work. I remember the bike shed where I parked my bicycle was situated behind the Buying Office.

I would leave our family home in London Road, Hertford heath, at about 8.30 am.  Immediately opposite was a large house known as Heathfield, a residential home for the elderly.  Next door was the former blacksmith’s shop but, by now, used as a store by Frank turner, a local greengrocer.  Next was The Crown public house, then Frank turner’s greengrocery and grocery shop.

Bill George’s shop was nearby.  He sold grocery, greengrocery, sweets and icecream.  Like Frank turner, he delivered to customers in Hertford Heath and elsewhere.

Further along was Hertford Heath Motors, then owned by Mr Bob Breckon, then the Gamekeeper’s Cottage in which Mr Jimmy ansell and his wife lived.  Opposite was the Village Hall.

By this time, I was on the part of the London road which was built on the roman road, Ermine Street.  I cycled past the council houses on the right, fields were on the left.  One of them known as The Long Meadow was the place where in the 1940s and 50s, Hertford Heath Cricket and Football Clubs played their home matches.  Next door to that were the allotments, all of them in full use at the time.  Further along on the right I went past the War Memorial and The Townshend Arms.

I then rounded a left-hand bend towards Hertford, cycling downhill, passing on the left Jenningsbury Farm, owned by Mr John Huson.  Opposite was a deep ditch guarded by railings.  There were stories of a ghost being seen near the ditch though I never saw it myself.

I then passed the main entrance gates to Balls Park Estate. The Porter’s Lodge was just inside the gates. Balls Park Manson and adjoining grounds and buildings were then a Teacher Training College.

Having reached the top of Balls Hill, I began my descent into Hertford.  The road had very tall trees on either side.  these provided popular nesting sites for crows and rooks.  Squirrels were in adundance and as the lighter branches of the trees on either side of the road met in many placves, the squireels could quite easily jump from one side to the other.  On the right was a wooded area known as Balls Hill Grove.  Within that was a large house known as The Rokkery.  Sadly most of the trees were lost when Hall Hill was made into a dual carriageway in about 1970.

Getting towards the bottom of the hill on the left was the Cowper School building where I was a pupil in the 1950s.  At the bottom, near the Fore Street junction, I passed, on the left, the car sales and repair business of Alred E Neale.  On the right was the area used for the Monday Poultry Market, then the Plough, standing on what is known to some as Plough Corner.

Turning left into Fore Street, I cycled past a row of large houses on the left which were then mainly used as office by the NHS and other organisations include a dental practice.  Next door to these houses was Elliotts Music Shop where one could buy all the latest records, on 78 or 45 rpm and 33 1/3 rpm long playing records.  Television sets and radios could also be purchased there.  On the right were some of the buildings of Christ’s Hospital School.

Further on, opposite the South Street junction stood the Hertford Motor Company.  Opposite was The Blue Boy public house which has been renamed more than once since 1959.

Further along Fore Street, I passed the furniture sales and repair shop owned by Mr Webb who lived at Hertford Heath.  nearby was Coopers, the hairdressers where I normally went for a haircut and Cousins, the large furniture store.  I then stopped at Spriggs Stationers and printers and newsagents to collect my daily paper.

Beyond Sprigg’s shop was a yard which led to a Veterinary practice.  Mr Andrew Chestnutt, a well known and respected local vet, held surgeries there.  He lived at The Downs in Downfield Road, Hertford Heath.  He later practised at a surgery at the bottom of Hoe Lane, Ware

Heading towards the Corn Exchange I passed Gaved’s Television Radio and Cycle Shop, Knights Valet Service, a dry cleaners later taken over by Sketchleys.  the Singer Sewing Machine shop was nearby.

On the other side of Fore Street was The Ram public house with the area for the Month Cattle Market to the rear, the banks and the Post Office were just beyond The Ram.

I turned right into Market Street passing the Corn Exchange. On the right was the building where the Saturday indoor mrket was held.  I remember a betting shop on the left then the large shop which I seem to remember belonged to the Copping family and I think it had fruit, vegetables and horticultural products for sale.

and then into Railway Street

Turning right into Railway Street I passed, on the left, J Wren’s bakery shop and a small tailor’s shop run by a Mr H Godfrey.  He sold many made-to-measure suits and was always happy to do alterations and repairs.  I also passed Coleman’s shoe shop and The Welcome sweet and ice cream shop.  I then passed the site of the Saturday Outdoor Market, then two fish and chip shops.  One owned by a mr Jovell who also had a restaurant the other owned by Mr Donaghue.

I then veered left, towards Hertford East station passing Jewsons the builders and the garage of A E Abbiss.  I turned left opposite the East Station, into Mile Road and passing the Fire Station on the left, then over the lines of the Great Northern Railway which was still in use at the time.

I then turned into Mead Lane. On the left was a large oil depot.  Quite often as I rode by, Mick McEwan, who also lived at Hertford Heath and worked at the depot, would give a cheery wave and say 2hello2 and of course I was pleased to respond.

Further along on the left was the Eastern Electricity storage yard, then the Mead Lane Cafe.  The railway lines to Hertford East and also the great Northern line were on the right.  I then turned left into Gashouse Lane (now Marshgate Drive) passed some cottages on the left then arrived at my place of work, Chaseside Engineering.