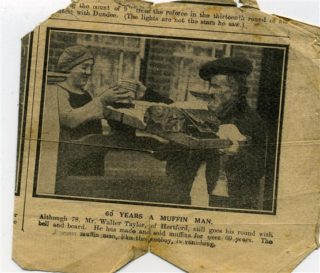 This is a photo taken of Walter out on his rounds, he used to walk to Ware and Hoddesdon, also to Bishops Stortford when he used to stop for the night in the village forge and his sons would bike out to meet him with fresh muffins. Here he is walking along the Ware Road in Hertford just about level with the old Workhouse which is now the site of the police station and about to be re developed.

The second picture is a newspaper cutting but we have no idea what paper it is from! It celebrates him being a muffin man for 60 years and still working. Many people who have recorded memories of Hertford around 1900 remember him walking along ringing his bell.