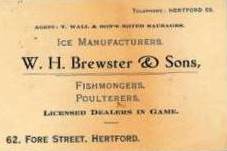 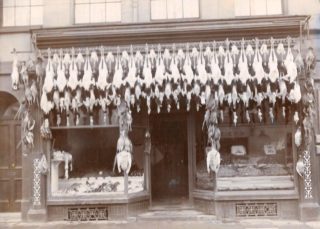 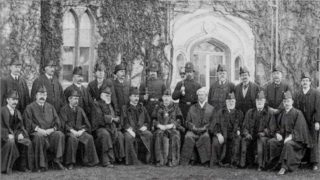 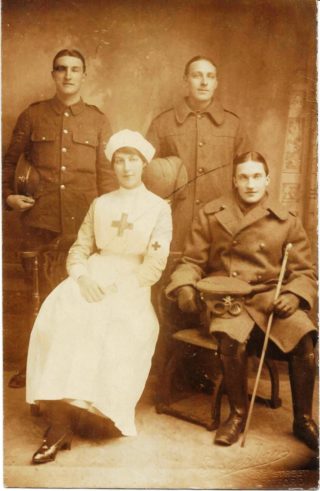 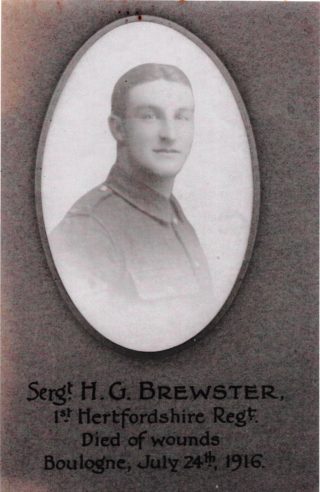 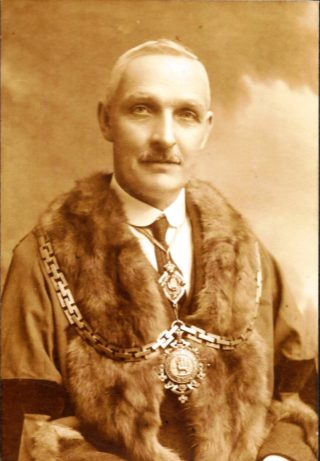 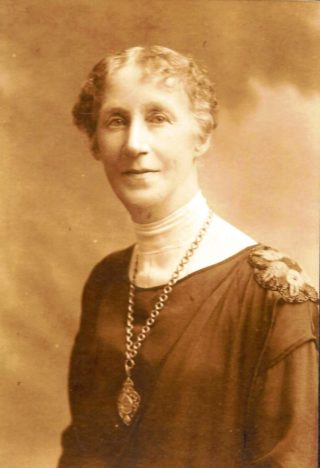 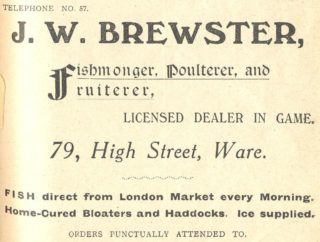 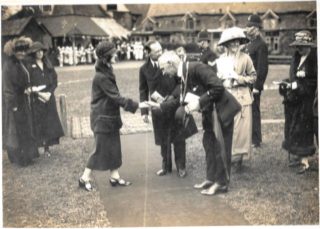 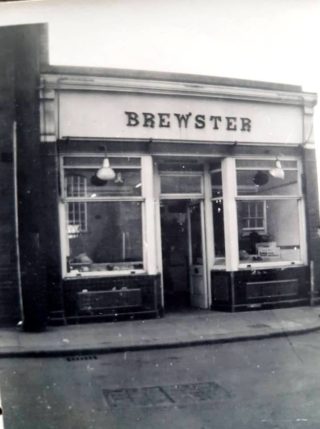 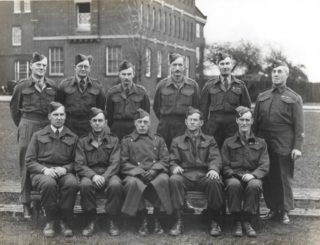 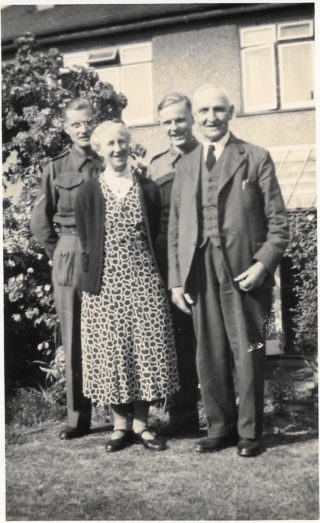 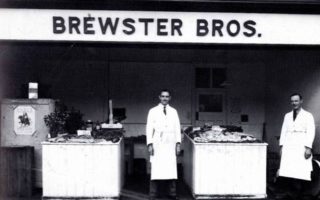 In common with many other inland areas of the Country, the coming of the railways, in the latter half of the 19th century, gradually enabled the populations of places like Hertford and surrounding areas to add the benefit of fresh sea fish to their diets. Previously it was virtually impossible to transport fresh perishable foodstuffs from fishing ports to outlets inland with anything like the  necessary speed to guarantee some sort of shelf life at the fishmongers. The Brewster family seems to have  recognised an opportunity to become involved in this trade at an early stage.

I am extremely grateful to Mrs. Dianne Brewster, a retired local school teacher who was married to John Brewster – grand-son of William Henry Brewster the main subject of this article. She gave me access to a ‘treasure trove’ of fascinating photograph and documents. Our starting point is a birth certificate – 1871 – in respect of William Henry Brewster, who was to become the family patriarch, continuing the family business whilst becoming an Alderman of Hertford Town Council, later serving as Mayor. William was born to Eliza & George Brewster, the latter being recorded as a “Fishmonger of Hoddesdon”.

Browsing through various trade directories it would seem that, over the years and up to fairly modern times, businesses were established and conducted in Hoddesdon, Ware and Hertford and, during the late 1950’s, also in Broxbourne.  A business card which clearly establishes the firm of WH Brewster – Fishmongers, Poulterers and Licensed Dealers in Game (also an Agent for T Wall’s sausages) as being at 62 Fore Street, Hertford.

An image on the right dating from the early 1900’s  is, undoubtedly, of the Fore Street business showing a massive display of poultry and game birds – although properties in that part of Fore Street were at some time subsequently re-numbered. Careful examination of the photo and research reveals that those premises are now occupied by the Nationwide.

The 1911 Census finds William Henry Brewster at 62 Fore Street with his wife of 22 years Helen (Ellen), who came originally from Bengeo, daughter Nellie (21) and sons William (19), Percy (18) and Herbert George (aged 16). The two eldest were born In Ware and all were involved in helping to run the business.

William (senior) was, by this time, also very much involved in the affairs of the town of Hertford. The worthies of the Town Council assembled in the grounds of Hertford Castle a year later during the term of Frank Page, as Mayor (1912). WB can be seen in the back row – third from the left – wearing distinctive headwear, and Frank Page is in the centre of the front row, wearing his chain of office. Sadly, only five years later, Frank Page became a casualty of WW1, being killed in 1917 whilst in command of the Third Battalion of the Hertfordshire Regiment at St. Julien a.k.a. Passchendaele. Such misfortune was not avoided by the immediate Brewster family.

An image shows daughter and three sons in their uniforms of service to the Country. Of these Herbert George Brewster, having attained the rank of sergeant whilst serving in the 1st Hertfordshire Regiment , suffered severe wounds at the Somme from which he subsequently died in 1916 – aged 21. Before this tragedy, Herbert George was trapped at the front in a gas attack. Fortunately, a comrade in the same regiment, and also bearing the name of Page, bravely rescued him. This comrade’s family, back in ‘Blighty’ were tenants of a house in Wellington Street, Hertford, owned by William  Brewster. In recognition of this great service the comrade was allowed to live rent-free at that property for the rest of his life, with his wife and daughter continuing the tenancy, after his death, on a ‘peppercorn’ rent.

We move forward to 1923/24 to find William Brewster in the role of Mayor of Hertford. One of the highlights of his mayoral year was a duty of welcoming Princess Arthur of Connaught – the, then, Princess Royal – to a civic event at Rye House on 4th May 1924 . During the inter-war years the Brewster ’empire’ developed, with business connections (fish and animal feed) being made in Lowestoft, doubtless being well connected by rail to Hertford East station. Additionally, further outlets were opened in Hertford –  Billy Brewster & Sons at 8 St Andrew Street and WH Brewster & Sons at 11 South Street.

A trade directory of the time showed a commercial advertisement, regarding South Street, as trading as fishmongers, poulterers, dealers in game and ice manufacturers. The latter was delivered locally and to some of the big houses in the area.

The clouds of WW2 begin to gather and we find William Brewster in uniform as a member of the LDV/Home Guard.

As we pass through the 1950’s, in the face of emerging supermarkets, the sale of fresh wet fish through traditional outlets gradually declines, resulting in their disappearance. Dianne Brewster joined the family in 1977 when she married John, grandson of the late, by then, William and Ellen  Brewster. John Brewster had become, by then, a hairdresser working from the family’s former business premises in Broxbourne.