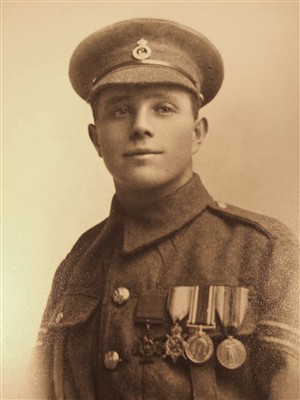 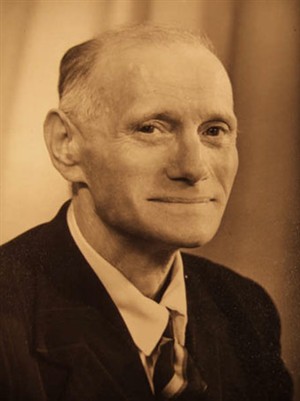 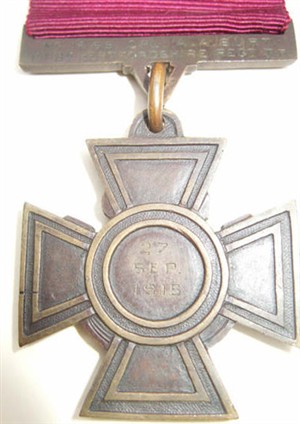 Alfred Burt was the first member of the Hertfordshire Regiment to win the Victoria Cross.  He was born at Port Vale in 1895 and moved to Nelson Street while still an infant.  After attending Cowbridge School and playing football for nearby Stapleford he got a job as a gas fitter with the Hertford Gas Company. Burt was a member of the Hertfordshire Territorial Regiment for some years and was mobilised in November 1914.  He won his VC at Cuinchy (in France) on 27th September 1915.

Burt was a member of the Hertfordshire Territorial Regiment for some years and was mobilised in November 1914.  He won his VC at Cuinchy (in France) on 27th September 1915.

The company were lined up in the front trench about 40 yards from the enemy trench, preparing to attack, when a large German bomb fell into the trench.  Burt could easily have found cover in a traverse, but instead went straight up to the bomb, put his foot on the fuse and wrenched it out thus making it harmless.  Burt recalled ‘I didn’t think much of the incident after that.  I took it as a matter of course.’

Unlike many other recipients of the VC, Burt lived long enough to enjoy the adulation of the British public, none more so than in his native Hertford when he returned to visit.  Pupils of his old school, Cowbridge County Council School, made a collection and presented Burt with an inscribed silver cigarette case.  They then gave three cheers and sang ‘For he’s a jolly good fellow.’   On Easter Monday 1916 some 3000 people gathered in the grounds of Hertford Castle to witness the presentation of an illuminated address, a gold watch and chain and a voucher for £100, gifts from the townspeople of Hertford.  Burt graciously accepted the gifts and told the audience, ‘I only did what many other British soldiers have done, but I was very fortunate to be recognised.’

The classless nature of the Victoria Cross was highlighted in an editorial in the Hertfordshire Mercury:   “Then, when the identity of the hero was established, there was the additional joy of knowing that he was just one of the people – the son of humble working folk, an elementary schoolboy, an artizan, a ‘common soldier.’  He has demonstrated that high courage, coolness, and self-effacement in face of danger are not the prerogatives of a particular class; that as stout hearts beat under fustian as under rich apparel.”

Burt died in June 1962 at Chesham, Bucks, having suffered over the years from the effects of a gas attack.  In 1979 Burt’s daughter presented his VC to the town of Hertford in a ceremony at Hertford Castle in which the Mayor of Hertford accepted the medal on behalf of the town.  It is now kept at Hertford Museum.