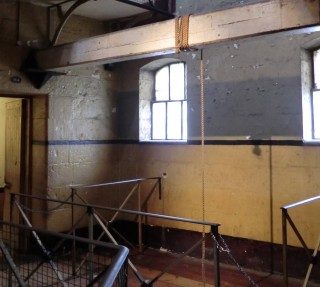 Robert Baxter was born in Hertfordshire in 1878, but little is known of his private life except that at the commencement of his ‘career’, in 1915, he lived at Port Vale, in Hertford.

During the following 20 years he assisted in 53 executions and was principal in a further 44.

His first role was on 15th July 1915, at Wandsworth, when he assisted Thomas Pierrepoint in the execution of a Robert Rosenthal who was a German spy. This situation was unique during WW1, in that all other convicted German spies were executed by firing squad at the Tower of London. On this occasion, however, accommodation at the Tower was fully occupied.

In August 1916 Baxter assisted John Ellis in the execution of the tragic Sir Roger Casement, for the crime of treason. Ellis was well known for having been principal at the execution of Dr.Crippen some six year earlier.

His first as Chief Executioner was that of Jean-Paul Vaquier, a French man, in August of 1924. Four years later in May of 1928 he executed Frederick Guy Browne who, with his accomplice, carried out the notorious murder of Police Constable Gutteridge on the road between Ongar and Romford. Pc Gutteridge had the misfortune to flag down the two criminals who he suspected of driving a stolen car, which he paid for with his life.

Robert Baxter was highly regarded by the authorities for the way he carried out his duties “quickly and silently”. However, something occurred in December 1928, which cast a shadow. This was the execution of Trevor Edwards at Swansea prison. The assistant had not cleared the trapdoor before Baxter pulled the lever, causing his assistant to fall into the pit with the prisoner. Fortunately, the assistant was not injured, but an official inquiry had to be held, during which it was established that Baxter was blind in his left eye. Nevertheless, Baxter was absolved of all blame in the matter, and continued his ‘career’ for a further seven years.