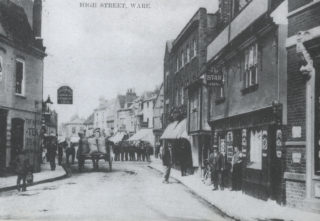 The Star Inn (on the right) c1900
Ware's Past in Pictures 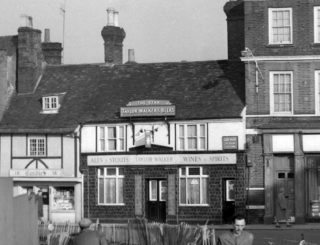 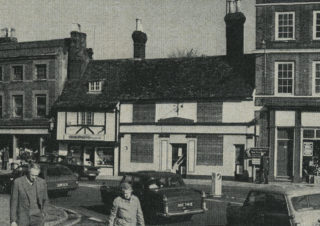 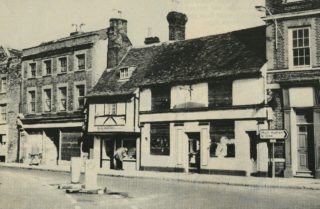 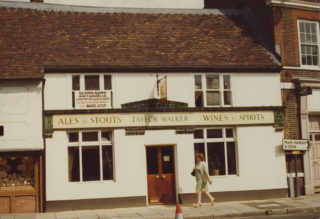 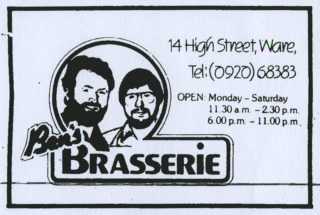 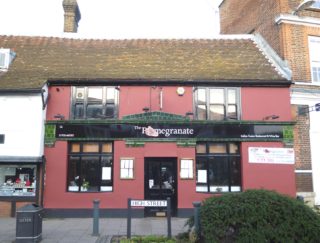 The Star was first mentioned in a court roll of 1512 though the building is said to date from the 1450s.

In 1735 it was run by Elizabeth Green who inherited it from her husband; she bought the pub next door and turned it into a shop.  It was occupied successively by a barber and wig maker.  Half a century later, most of the shop was included in The Star.  Hertford brewers, Fordham and Flowers acquired the pub in 1790. It was run by the Webb family for the first half of the 1800s.  Later, it belonged to the Canon Brewery Co Ltd; Benskins of Watford in the 1930s and Ind Coope in the 1950s.

The Star [at 14 High Street] was one of a number of buildings in the High Street purchased by the County Council to make way for the controversial ‘relief road’, which thankfully, was never built.  The pub was closed by 1968.

In the early 1970s, the building was in a such a bad state that the chimney had collapsed and a tarpaulin covered the roof. The council finally decided to sell on the condition the new owner would restore it.

In 1981 it opened as Ben’s Brasserie and later, Coleby’s Wine Bar.  In the early 2000s it was Flutes Wine Bar and Restaurant, then Le Spice Merchant Indian restaurant until 2012 when it changed to the Pomegranate restaurant and wine bar.  In 2013, it was refurbished again and is currently Amwell Tandoori.

Some Landlords and Ladies