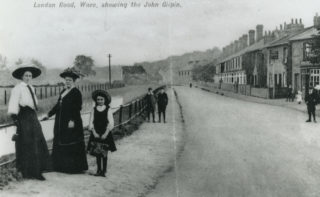 Postcard showing the original pub on the right
Herts Archives

In 2014, The John Gilpin pub, which had been trading in the town for 125 years closed its doors for good, the announcement being made just four days before.  Despite a large investment five years ago, the land was sold to developers and it was demolished.

The earliest known mention is in 1868 and the original building (now a house) stood a few doors down.  In 1869, the Amwell parish vestry opposed the renewal of the licence to William Dewberry on the grounds that ‘it would not conduce to the morality or the quietness of the neighbourhood’.  Nevertheless, the licence was renewed and was later transferred to the present building which opened in December 1969.

The new John Gilpin was built on the site of the old Malakoff pub and replaced The Red House further up which was demolished to make way for a service station.  It boasted two large bars, each with a juke box and dining area that were ‘plushly’ decorated.  One, called The Maltings Bar was decorated with old malting memorabilia and replica kilns which would have been familiar to the older inhabitants.  It was officially opened by Councillor John Simpson, who said ‘The John Gilpin is meant to be a good local, not a jaunting house or eatery’.

The pub was named after a poem made famous by William Cowper in 1782.  Written as a comic ballad, it runs to 63 verses and gives a vivid account of a hapless journey on a runaway horse.  John Gilpin, a merchant of Cheapside was due to dine with his wife at The Bell in Edmonton and borrows a horse as there was no room in the carriage with his family.  The horse bolts and races past the Bell, finally stopping ten miles away at his owner’s house in Ware.