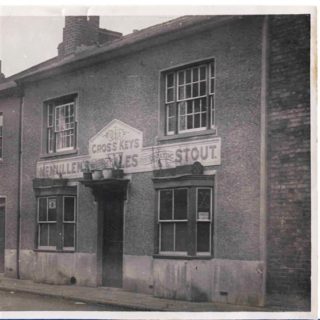 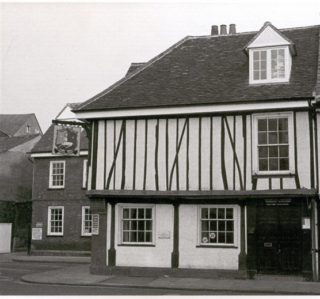 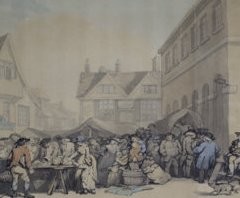 Hertford in 1849, although probably considering itself a “market town” was, commercially, still back in the 18th century in many respects. A modest railway connection, further out of Town than today, had arrived some six years earlier but this was barely integrated into the community.

Looking around Hertford today it is easy to imagine, wrongly, that the surviving old buildings are entirely representative of Hertford 160 years ago. A large part of the town’s buildings were very poor indeed, and outbreaks of cholera in 1832 and 1849 had badly affected the town centre, coupled with regular outbreaks of typhus.

The poorer population had to endure cheaply built and badly maintained living accommodation, “cesspools under dwellings, effluvium so offensive that parties could not occupy their lower rooms, dung heaps, foul water, excrement soaking into houses, soil from privies soaking into wells and an accumulation of offal from slaughterhouses”.  Adding to this  came ‘market day’, when local farmers and dealers met, in those un-metalled streets wide enough to accommodate them with their livestock, and it is not hard to imagine why the more  far-sighted and business-minded citizens began to feel increasing concern for the future of Hertford as a competitive market town, and for the well-being of its inhabitants.

A bundle of papers (D/EL?3346/1-42) charts the fascinating progress, from the initial idea to formation of the Hertford Cattle Market Company in 1851.   Early on there appears a Draft Prospectus, prepared by Longmore & Sworder – solicitors. It commences with the words “It has long been felt that a proper cattle market is much wanted in the town of Hertford – At present the accommodation for sheep and pigs is very limited and there is none whatever for horses and cattle – The consequence is that the latter are exposed in the Main Street to the great interruption of the traffic, to the danger of passers-by and very often to the injury of the animals themselves”.

Earlier efforts, frustrated by lack of a suitable site, were mentioned – deeming the only viable location would be adjacent to the Corn Market, so that corn traders could also conveniently access the livestock.   It then heralded an opportunity to move forward by purchasing sufficient property “at the back of and immediately contiguous to the new Corn Exchange” It detailed properties to be purchased as the Cross Keys Inn, The Old Workhouse Yard , The White Hart Inn, and related premises.

The proposed site (of an undisclosed area) could be accessed by cattle from Fore Street, Back Street (now Railway Street) in two places, and from the Market Place by the White Hart. Additionally, it was proposed that a doorway be formed at the rear of the Corn Exchange, thereby forming “one large market”. A “proper officer” would be employed to superintend the Market and pens and a good supply of water would be provided.

The Prospectus sought the support of the inhabitants of Hertford with a warning that the inevitable decay, if nothing was done, would result in the removal of the market business to “other towns” , citing Hitchin’s recent improvement and adding that “all classes would inevitably suffer”   It concluded by proposing formation of a Joint Stock Company with an authorised capital of £5000 divided into share of £10 each.     A meeting of an acting Committee was held on 30th October 1849 in the Savings Bank Room in Shire Hall – present were Messrs. W. Christie, J.W. Hunt, W. Longmore and M. Sworder.   The following twelve months seem to have been taken up in negotiations and discussions with various parties including a W. Drew who was offered £160 for his leasehold property in Back Street (now Railway Street).

At the end of Autumn 1850 letters addressed to the Committee and JJ Gripper (Mayor) started coming in from prominent persons locally, including the Marquis of Salisbury, indicating their likely take up of shares. Amongst the papers, is an unsigned and undated note detailing projected capital expenditure – £1300 for the Cross Keys, £1100 for the Old Workhouse Yard, £1580 for the White Hart estate, £500 for fitting up  and £500 for legal and other expenses – Total £5280. Against this the Market was anticipated to produce an income of £172 per annum. It also details ‘probable uses’ of the new market including model cottages for police, a drying ground, an engine house and slaughter houses amongst others.

On 12th October 1850 the Provisional Committee agreed to write to all potential investors formally requesting them to enrol as shareholders. Interestingly it points out that the Market would be a safe investment (unlike speculation in railways).   A letter from Thos Sworder to JL Foster dated 21st December 1850 reported that he and the Mayor had canvassed Fore Street for additional supporters and was disappointed that only another 38 shares had been taken up.

Following a meeting at the Salisbury Arms on 30th August 1851 a Notice was issued to all shareholders, on 5th September,  that various savings had been made in proposed capital expenditure i.e. only now to use part of the White Hart and that purchase of the Old Workhouse Yard could be deferred. Accordingly, only £2500 would be required following a donation of £100 to the enterprise by Abel Smith. The committee would now begin taking the necessary steps to register the Hertford Cattle Market Company as a joint stock company and that consequently an initial ‘call’ of one shilling per share would be made upon shareholders.   The Notice was signed by a J.L. Foster.

The Notice was the last of 43 documents and papers and therefore the account ends here. No doubt others will come forward to add to this story.