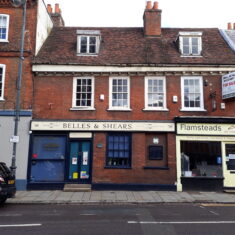 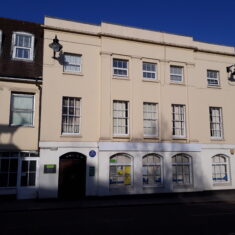 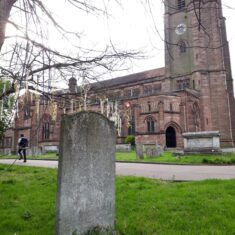 The casting of bells has always been a time-consuming, complex business. The process has changed very little since the 12th century. Ingots of bronze are heated to extreme temperatures and the molten metal poured into carefully constructed moulds set within the ground. Bells can easily be damaged or lost during this risky process. Finishing includes tuning, engraving and attaching the clapper.

In the medieval period bells were cast on or near the buildings they were made for. Bell making was a skilled trade, the craftsman moved from place to place, making, repairing and re-casting bells in situ. By the 17th century, with the improvement in transport links, bell foundries became established in towns. Robert Oldfield settled in Hertford in 1604 after an itinerate apprenticeship with his father in the Midlands. He became a tenant at 38 St Andrew Street with his wife Sara, who ran an ale-house.

The bell foundry was at the rear of the property on the banks of the River Beane. From here they were sent out around Hertfordshire and on into surrounding counties. Local commissions were taken for Bengeo (St Leonards,) Great Amwell (St. John the Baptist), Stanstead Abbots (St. James) and Thunderidge (St Mary).

Small local foundries, like Robert’s, were susceptible to local conditions. A poor harvest, an outbreak of disease or political unrest could see the market for bells decline. At such times, the Oldfields would have looked for supplementary income to Sara’s alehouse, run at the front of the property. Initially called the Bell, but changed to the Golden Bell after complaints from The Bell in Fore Street (later the Salisbury Arms)

Over 100 years later, the bell trade was less precarious. Transportation continued to improve and the craft became concentrated in fewer centres. Hertford’s position on the Lea allowed heavy loads to be transported via the Thames to towns to the West and North along the canal system.

John Briant came to Hertford around 1778 from Suffolk. His family saw his future in the Church so John received a good education. Nevertheless, he trained as a whitesmith, probably in St Neots. His father had worked for the Salisbury Estate in Hatfield. Perhaps through this connection John set up his foundry on land owned by the Earl of Salisbury, by the Hertford Castle walls. John joined the Hertford College of Youths, the local bell-ringing society, giving him an intimate knowledge of the fine qualities of church bells.

Bell production peaked for John Briant between 1790 and 1816. Over 400 bells have been attributed to him across central England, from Kent to Lincolnshire, Suffolk to Shropshire. A set of 8 bells marked ‘John Briant Hertford’ even hang in Honolulu Cathedral, USA. The bells were originally cast in 1812 for a church in Shrewsbury, but were sold on in 1989. More locally his bells included those in The Shire Hall, All Saints and St Andrew Churches in Hertford. Also, Hertingfordbury (St Mary), Stanstead Abbots (St. James), Stanstead St Margaret (St Mary the Virgin) and Ware (St Mary the Virgin).

Eventually (in 1825) the foundry business was sold to Thomas Mears of Whitechapel. John retired to the Marlborough Alms-houses in St Albans, although he continued as a consultant on the repair of bells. He was buried at All Saints Church and commemorated just inside the entrance gates. The foundry was destroyed by fire and re-developed as 12-14 Parliament Square, now Hertford’s Job Centre.