On the 5th day of January  in the year of our Lord 1885 at 5 o’clock there assembled in the Rectory Bengeo the following gentlemen of the Committee the Revd Wolmer Wigram Chairman, The Revd JCM Mansel-Pleydell, Captain Richd B Croft, Messrs GE Palmer & G.Gosselin.

1  The Secretary read the minutes of the last Committee meeting of 4th March 1884 were read by the Secretary and Confirmed by Mr Wigram.

2.  Mr Palmer then proposed that it would be for the public benefit if the minute book when completed were deposited in some safe and convenient place from whence in future time, it may be taken out and read in the ears of the people to great edification a joy of dissenters of all sorts & conditions, more especially to the salmon fry then existing – although as he feelingly expressed it, he hoped that all salmon fry &c would then be (even though it were by the gentle rod of adversity) landed on the shores of the Church of England.

This was warmly seconded by the Chairman & carried unanimously

3rd The Secretary read a short report of the work carried out since the last meeting of the Committee & it was agreed to copy this report into the minute book.

4th The Secretary gave in Mr Micklethwaites certificate which had been forwarded him by Mr Ekins stating that there is due to the aforesaid Mr Ekins the sum of £77.6.8. for works finished _

The Committee agreed to pay this bill and authorised the Treasurer to give Mr Ekins a cheque for the same.

5th The Committee considered Mr Micklethwaite’s plans for an open brick drain round church to carry off the eaves droppings (-pluviat-) also an estimate sent in by Mr Ekin’s for carrying out the said plans, according to which the total cost will be £34-17-6 – The cost of channel round the nave alone will be £16 _

The cost of channel round chancel including gulley & drain to discharge water onto Church yard with blue brick eye & back flap will be £18-17-6  the estimate was divided thus, so that the Committee if they thought good might do the Chancel first & add the nave drain at a future time _ 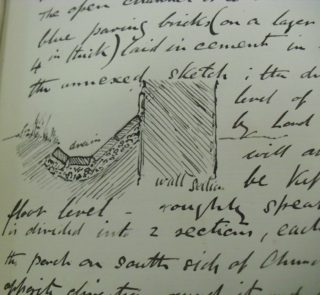 The open channel is to be constructed of blue paving bricks (on a layer of concrete 4in thick)  laid in cement in section like the annexed sketch;

the drain (if the level of church yard by Lord Reg’s Tomb will allow it) is to be kept below the floor level – roughly speaking the channel is divided into 2 sections, each starting from the porch on south side of Church & going in opposite directions round it and uniting in a catch pit in the side of path NE of Chancel window from which the water is conveyed by a 6” glazed sanitary pipe to a point about 30 or 40ft NE of Church where it discharges through a brick eye &c onto the grass of church yard.

Mr Palmer thought that eaves trespassing would have been cheaper; but it was pointed out that they want more looking after than a drain and are at the same time a great disfigurement. 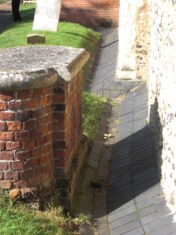 Mr Palmer suggested that it would be as well to have a test hole dug in the Church yard near the end of proposed drain to see what the soil might be; for if a dense clay were found there it might prevent the water disappearing and so cause difficulty.

Mr Mansell-Pleydell thought that this precaution was very necessary.

Mr Gosselin stated that undoubtedly there is much clay in the Churchyard but also a large quantity of gravel stones  these would help the drainage and that another point in their favour is the fact that for the last thousand years or so the people of the parish have been persistently burying one another in the church yard; which operation generally produces a sort of honey combing conducive to good drainage.

6th It was agreed that the south door of Chancel and the hole in north wall of same should be filled up.  Mr Gosselin having pointed out to the Committee that the south wall was very weak from the unwise way in which doors windows pecinas, sedilius &c &c had been cut in it & that the blocking of the door would add strength, the hole in the north door was very curious and therefore it was proposed only to build a gin wall on the outside leaving a deep recess on the inside which might be closed by an oak panel & so while keeping out the weather thieves, &c by the wall and hiding the irregular ruin of a lock on the inside with wood; they will leave the much disputed about space between two for archaeologists to fight in _ 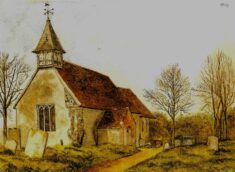 Gentlemen – I have to report that since the last Committee meeting on the 4th March 1884 Messrs Ekins have finished the oaken ceiling in the apse of the Church as you desired.  This work is the most expensive we have had to carry out owing to the fact that the boarding had either to be carefully sawn to the exact curve, or bent from the flat plank into position after being sawn on the edge to a certain geometrical sweep – the first plan causing much labour the second great waste of materials – Mss Ekins adopted the first plan for the cornice so far as the purline and bent the planking from the purline up to the Kingsport head -; the work is sound and good, but there is a slight difference in appearance of the planking cut & that which is bent, which Mr Micklethwaite considers time will efface _

I have asked Mr Micklethwaite what work should have priority after the roof.  He tells me, the most important is to remove the surface water from foundations and then the pointing of the walls – so I asked him to make out a plan for these walls – Messrs Ekins have taken the necessary level for us and we have come to the conclusion that it is possible to get rid of the water in the lower part of the Church Yard earthwork – without interfering with outside neighbours.  Messrs Ekins will undertake to do this work according to Mr Micklethwaites plans for the sum of £34.17.6 as per their estimate which I hand in for your consideration.

Mr Micklethwaite considers that the South door of the Chancel should be blocked up, that wall being rather queer on its legs, he proposes to leave a recess both outside and in to mark its place leaving about 20in of brickwork in the centre _

I have brought for your consideration this plan of the drains & seats.