The above committee met at the Rectory Bengeo at 5.45 or there abouts p.m, on the 5th March in the year of our Lord 1889 – Present the Revd Canon Wigram Chairman;  The Rev JCM Mansel Pleydell Treasurer; & Mr GLH Gosselin Secretary:-

After some preliminary conversation & hospitable refreshments provided by the Rector, the other members of the Committee not putting in an appearance: {N.B. I suspect they are still very busy haggling over these yokes of oxen, wives, & acres, as they were in the year 1886} – the Committee went to work.

1st           The Secretary gave in a report minutes of works carried out since the last meeting, which was taken as read & ordered to be copied into the minute book (see end of these minutes) _

2nd        It was agreed that the balance due to Mr Ekins of £23”5”4 should be paid to him by the treasurer – this balance is due on the work carried out since the last Committee meeting of 7th Oct 1886 – Mr Pleydell explained that Messrs Ekins had received £50 on account during the current year, Mr Micklethwaite having given them a Certificate for £73.5.3½.

4th The Minutes of the Meeting last held were taken as read & confirmed _____|_____ Referring to the proposed floor observed in the report the Secretary mentioned that he had suggested to Mr Micklethwaite that the higher step should, where the ancient tiles are to be laid under the alter, be entirely of marble __

Mr Micklethwaite for the following reasons does not approve this – the value of the church consists in its old work, much of it of an early period & of a rough Character, there being in fact hardly a scrap of ornamental work left to us, any that may have been added by later men, having proved too much for Bengeo folk of a hundred years back & it was carefully removed; – now a marble floor is the most sumptuous that can be laid & he considers that the contrast with the old work would be too marked, seeming to put that old work to shame – and he considers that the proposed floor of stone with black marble dots for the lower steps and  atemat white stone & black marble squares for the upper will be more in keeping with the rest of the church.

5th        The Committee agreed to the proposed floor being laid when the money was in hand – although the Chairman remarked with regard to plan of fittings, that he should have liked to have seen the alter in its original place on the “Chard of the apse” but this owing to the nualness of the chancel and the requirements of a modern choir is impossible.

In September 1888 Mr Ekins began to take down all the large perpendicular window of Chancel mmm excepting its western jamb – the loose mass of flint work which formed the eastern splay was removed with the greatest of ease, we being most anxious not to disturb the quaint wall painting existing on the splay of the earlier window (replaced by the perpendicular one) which painting was partly destroyed & partly covered up by the splay of the later window -; we were repaid for our care, for we found about half way up the window that this earlier splay had been roughly cut away, (thus damaging the painting as remarked above) the loose flint work of the “perpendicular folk” taking its place, and on our removing this we were fortunate enough to find the very roughly plastered splay of the original Norman window – there was very little of it left us, and that little has been “hacked” to give key to later work & is very rotten – so that we now have actual proof of the fact the Chancel was originally lighted by at least 3 Norman roundheaded windows situated towards the north east the east & the south east – “I say at least” – for the 2 existing round headed may have been there in Norman days but of this we have as yet no actual proof —— 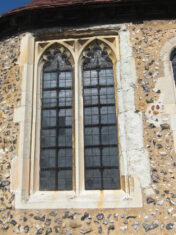 The stonework of the perpendicular window was overhauled by one Smith & his men Want masons of Ware the tracery & the mullion were cut at the glassline and the outside being very decayed was discarded, new stone taking its place the inside halves were kept the new & old stone being strongly joined with brass cramps & Portland cement; the stones of the jambs were pieced where necessary & new stone member being given to both at the glass line._.  The Cill – originally in 3 or 4 stones & which had been cut down so as to lengthen the window by some 3 or 4 inches was in a bad state, this has been replaced by one new stone of Great Strength – under this stone there was placed in a recess in the wall a brass bowl & thevin were put certain coins of the year among them        2                           .  I wonder much whether they were extracted before the cement set.

The window was reset & at the top inside under the oak wall plate of roof there was placed a York Landing taking the place of the decayed wooden planks, thus making a neat junction between the stone work of window head & the oak cornice of new roof and at the same time giving an abutment to the two splays of window _.  The stone used for repairs is Ketton3.  The old iron window bars were cleaned up mended and replaced and the window has been reglazed with squares of clear white glass _

In making up the flint work inside we were able, while replacing of half perpendicular splay at its original angle, to show not only the early English splay & its painting, but also, by leaving a small oblong recess, the Norman splay or rather its’ remains  – in which recess we can see how the early English workmen turned one of the outside Arch stones of the Norman window into a quoin4. _ The two other small windows on the South side have been repaired without removing them – both have been provided with new cills

The repointing of the outside of the Chancel walls was then taken in hand, all that was good of the old surface was left, but nearly all the southern wall & about 5ft high all round the rest of the chancel has been carefully repointed, first with a coat of portland cement well worked into the joints & secondly, before the portland cement had set, with good mortar – the work being left as nearly as possible to resemble the old face the flints showing just sufficiently _ 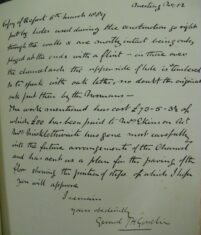 Copy of report for meeting 12 written by Gosselin

Two or three interesting facts were discovered while this was being done – first that the Normans built their work in courses of about 9 or 10 inches high – 2nd that all the put by holes used during the construction go right through the walls & are mostly intact being only plugged at the ends with the flint – in those over the chancel arch the upper side of hole is “timbered” so to speak with oak laths, no doubt the original oak put there by the Normans _

1 These amounts were never filled in.

3 Ketton stone is a pale yellow sometimes pink limestone named after a village in Rutland.