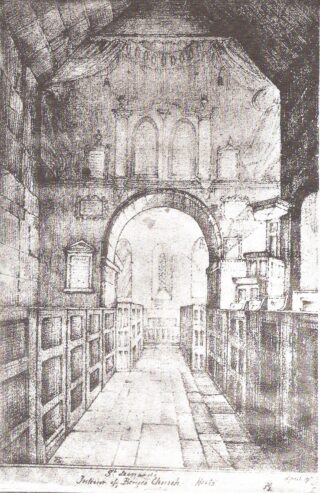 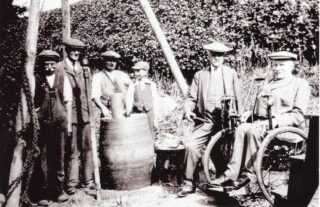 Gerrard Gosselin on the right in his wheel chair

At the Easter Vestry, April 15 1879 a Committee was appointed to examine the condition of the old Church & Churchyard, to consider the subject of its repair and to make a report to a public Meeting of the Parishioners.
The Committee consisting of the Rector & Churchwardens, Miss C Gosselin, Captain Parker & Mr. Thomas Sheffield met at the Old Church on April 29th at 10.30 am. And afterwards repaired to the Rectory.

1. A new lock was ordered from Mr. Sheffield for the Church Door.

2. It was decided after much discussion
1. That it would be inadvisable to close the right of way through the Churchyard.
2. That it was most desirable to repair the building sufficiently to preserve it, both as a monument, and a Church as at some future time it may be required for Divine Service.
3. That the Churchwardens should make inquiries as to their powers, to charge the repairs of the fences upon the rates.
4. That a report be drawn up and presented to a Public meeting on Thursday, May 8th at 7 pm in the schoolroom.
The following Report was presented at a Public meeting on May 8th at the Schoolroom, Bengeo.
Bengeo Old Church
1 “The Committee appointed by the Easter Vestry to consider the condition of St. Leonard’s Church (the Old Parish Church) and Churchyard beg leave to report
with reference to the Church
“That it is advisable that it be sufficiently repaired to save it from further ruin, as it will probably be required at some future time for Divine Service and is a monument of Early Norman Architecture, very rarely to be found, dating from the 9th century.”
With respect to the Churchyard
2 The Churchwardens having ascertained that the cost of repairing the fences can legally be defrayed to the rates, are taking steps to bring that about.

It was resolved to adopt part 1 of the above report and the following ladies & gentlemen were appointed to endeavour to raise the necessary means to carry out the repairs.

It was resolved to receive, and refer part 2 of the report to the Comee

1 The original minute included “& Lloyd” after Misses C. Gosselin but this was subsequently crossed out.

5 Miss Charlotte Gosselin (1816 – 1892) lived at Bengeo Hall with her sister Miss Mary & her brother Gerard.  They were a wealthy family.  The two ladies spent much of their time doing ‘good works’ especially helping in the Church & Bengeo Girls’ School.  There are two staned-glass windows in the north aisle dedicated to them in Holy Trinity Church, Bengeo.

9 Reverand Charles J Marshall (1843 – ) was head of Danesbury Preparatory School, 5 Warren Park, on Warren Estate.  In 1881 he lived there with Elizabeth, his wife & their two daughters and three sons.  in 1891 he is still living at the school but is also listed as Rector Of Shelling Stone, Dorset.