The Committee again met on the 5th of March in the year of our Lord 1883 at the Rectory when there were present the Revd JCMM Pleydell the Rector & the Churchwardens Messrs Charles E Longmore & George E Palmer also Revd W Wigram Rural Dean & Rector of St Andrew’s Church Hertford & Mr Gerrard Gosselin the secretary.
_________________ The following are the Minutes of the proceedings of the Committee, the Rector being Chairman.
1|| The minutes of the proceedings of the meeting of the 20th of February were read & signed by the Chairman.
2|| The Rev W Wigram was thanked for so very kindly consenting to be on the Committee & for bringing his great knowledge & experience to bear on the subject.
Mr Mickelthwaite’s plans for a new roof having been looked over by Mr Wigram he expressed his entire approval of them & being asked by the Chairman whether he considered that the Committee could with propriety put forward the claims of the Church to a general interest & not have to confirm them to the parish, he informed the Committee that he considered the Church of unusual interest & value to all lovers of English Norman Architecture, comparing it most graphically to the Tower of London, he clearly described how its high antiquity was established by the marks of hammer & axe dressing on its venerable Stone Chancel Arch & he spoke of the first introduction of the chisel into the hands of the British Masons (altogether a most edifying Sermon on Stones) – he further added that only one building in Hertfordshire he considered could vie with St Leonard’s as to age, that one being St Michaels Church at St Albans. The abbey itself he did not consider could compete ___ being asked next about the raising of the necessary funds, as to our chance of obtaining any answer to our circular, he suggested that personal letters sent to everybody was the only effective way to get help & gave strong evidence that it does pay.
3|| The Secretary informed the Committee that he had written to Capt Croft asking for an appointment with reference to his belonging to the Committee.
4|| A letter from Mr Albert Harthorne F.S.A. Secretary of the Archaeological Institute was read consenting to belonging to the Committee which was much appreciated & the Secretary was instructed to thank him.
5|| The matters of Mr Longmore’s circular & Mr Micklethwaite’s report were considered with reference to their publication and it was agreed that the report excellent as it is, is much too learned for the dense minds of the uneducated, to grasp, that to alter it would spoil it & therefore it was agreed that a circular more voluminous than Mr Longmore’s & combining it with extracts from Mr Micklethwaite’s report carefully selected so as to be without difficulty swallowed should be arranged & Mr Wigram kindly undertook the task, also that the report should be printed for the learned to peruse. It was further suggested that if possible a small framed plan of the church should be sent with the circular.
6|| The office of Treasurer was undertaken by Mr Pleydell. 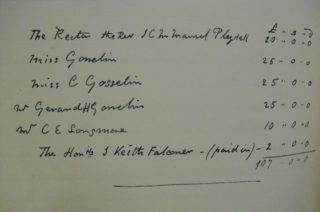 7|| Subscriptions amounting to £105”0”0 were promised & a cheque for £2”0”0 paid in – {See list on opposite page}1
8|| A letter from Mr Mickelthwaite was read & his statement with regard to fees considered – & it was agreed that they were normal & that to have a cheap architect is a “penny wise pound foolish” game – the Secretary was told to write to Mr Mickelthwaite & inform him that they wished him to be their architect & to carry out the superintendence of the works on the terms proposed in his letter {See list on opposite page}2
9|| Collecting cards were condemned unanimously
10|| It was agreed that an advertisement should be inserted in the Conservative & Democratic organs published in Hertford, asking possessors of pictures of the Church to allow the Committee to use them – the object being to obtain information as to any alterations in the building
11|| Proposed by Mr GE Palmer that the editor of that influential Conservative journal known as the “Herts Guardian” should be humbly petitioned to bring his powerful pen to bear on the excellent work the Committee have in hand – Committee divided – the proposal was not carried
12|| Agreed that Mr Butler should be asked to come and view the church & subscribe.
13|| Agreed that a money box be placed in the Church with the object of waylaying the silver & gold of liberal visitors & that a Copy of Mr Mickelthwaite’s report when printed be hung over it for edification of the curious.