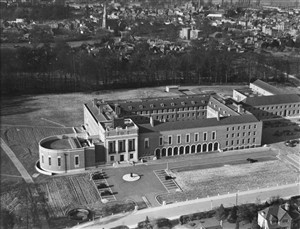 County Hall had its own Platoon of the Home Guard and what a motley crew we were. We were responsible for the safety of County Hall. Several evenings a week it was a case of rushing home for a cup of tea and change into uniform and back to County Hall for a lecture, practice of all sorts or a night patrol skirmish in Balls Park. At weekends we had to rush up to County Hall every time the Air Raid siren went and this sometimes happened several times in one day. Also all sorts of exercises were arranged for Sundays. I well remember one occasion when, amidst great excitement, we were to practise grenade throwing with live ammunition & I narrowly missed death when one member badly mis-threw his grenade! We did our best and I am sure we should have died valiantly had “the balloon gone up.” In the early hours of one morning the “All clear” siren sounded after a nasty hectic night and with a sigh of relief I hopped on my bicycle for home and an hour or two’s “ kip”. After a few yards I fell off my bicycle on hitting a lot of stones and on returning later that morning for work I discovered I had run over the edge of a crater made by an unexploded bomb which fell not far from the council chamber.

Having to carry a gas mask at all times wherever you were or went was a bit of a bind.

With the development of the war, and the departure of more and more experienced staff to the forces, work became a real strain and coupled with Home Guard, Street fire watching (many were members of street watching parties as well as at County Hall) &c. there hardly seemed a minute to live – but most of us survived.