A proud monument to Hertfordshire valour 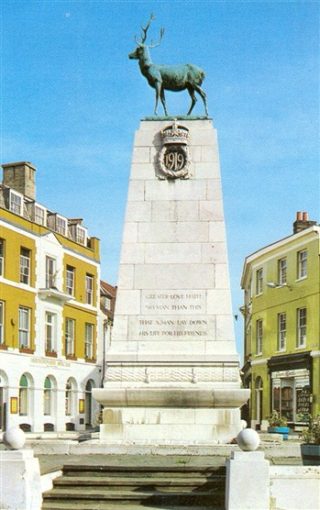 We all know it. We all admire it. The War Memorial on Parliament Square is one of Hertford’s best and most beautiful landmarks. The bronze stag, symbol of Hertfordshire, was sculpted by Sir Edward Alfred Brisco Drury, and it stands atop a great stone plinth (whose architects were Mr Maurice Webb of Sir Aston Webb & Sons), at the bottom of which are 564 names; the names of men who died for King and country, for us, in the two World Wars. Originally, it only bore 365 names, as it was first unveiled on the 6th of November, 1921 (by the Archdeacon of St. Albans), and so was only in memory of the First World War. 199 further names were later added in memory of the Second.

Little more needs to be said than that it honours many brave men who perished so that future generations might have freedom… but a quotation might here be apt. The words that adorn the main face of the memorial, taken from John 15:13 in the Bible, read thus: “Greater love hath no man than this, that a man lay down his life for his friends.” And that says it all, really.