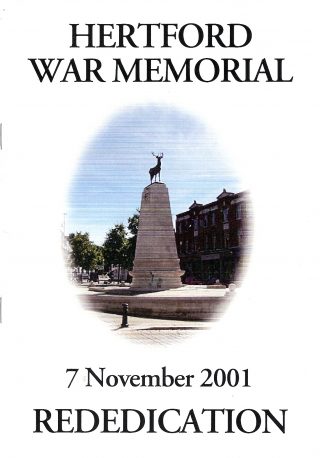 Hertford War Memorial was unveiled with great ceremony at 3 pm on Sunday 6th November 1921.  The War Memorial Committee had originally decided not to include the names of the fallen on the memorial.  This decision drew much condemnation in the local papers and was eventually reversed.  The names of the nine people who died as a result of the airship raid on 13th October 1915 were also included.

The names of the fallen in World War Two were added in 1948.

Grants from English Heritage and the Friends of War Memorials enabled Geoffrey Bysouth to clean and restore the memorial.  On Wednesday, 7th November 2001, to mark the completion of this work, a ceremony was held to rededicate the memorial.

The Order of Service was:

Hymn: For All the Saints (words by William Walsham How) accompanied by a combined band from Richard Hale, Simon Balle and Sele Schools.

Make me a  Channel of Your Peace: sung by a choir from Bengeo, Mill Mead, Abel Smith and Wheatcroft Schools.

Readings by Sele and Wheatcroft Schools

Hymn: I Vow to Thee my Country (Words by Cecil Spring-Rice)

The Mayor of Hertford – Cllr Dainne Desmulie was Master of Ceremonies

The service was followed by a reception in the Corn Exchange, Fore Street, Hertford