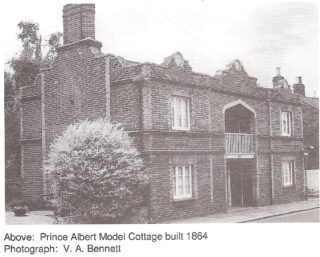 In Cowbridge, Hertford, next to the Congregational Church, is one of the two Prince Albert Model Cottages built in Hertfordshire. Erected in 1863 by the Hertford Building Company it is a replica of the original designed by the architect Henry Roberts for the Great Exhibition of 1851.

The Hertford Building Company was established in 1859 to build and improve housing for the labouring classes. An inquiry conducted into the sanitary state of Hertford after a cholera outbreak about 1850 found an abysmal state of affairs. The greater part of labouring class housing was in closely confined yards and alleys, very often without an adequate water supply or drainage and with as many as eight cottages sharing the same outside lavatory. A large number of these wretched dwellings were built between 1820 and 1835 for the sole purpose of creating votes.

A branch of the Labourers’ Friend Society was formed in Hertford in 1858 to promote “the improvement of the conditions of the labouring classes in the town of Hertford and its neighbourhood”. It was from this Society that the Hertford Building Company was to emerge. The ”Mercury” reported that “as a means to a desired end, we are glad to see that a company for building cottages for labourers has been formed in Hertford. We hope that it will be heartily and efficiently supported by men of all parties”.

The Hertford Building Company decided that its new cottages would each have a minimum of three bedrooms plus a living room, kitchen and wash house. Thomas Smith offered his services as architect to the company in an honorary capacity. He also laid before a meeting some plans of cottages which he had prepared and, according to the “Mercury”, drew attention to the fact that “there was no one better acquainted with cottage building than he was”.

Henry Roberts also offered advice to others on the design of new housing for the poor. Accommodation, he advocated, should be spacious and healthy and cheapness of the construction to be in relation to durability and comfort. Any expenditure on unnecessary accommodation involved a rent increase for the occupant which was to be avoided at all costs.

The first positive step taken by the Company was to hold a competition for two pairs of cottages, each having two rooms on the ground floor and two or three bedrooms on first floor, to cost not more than £180. Mr Sextus Dyball, an architect from London, was declared the winner. The cottages were built on a site, north of St Andrew’s Cemetery, which had been bought from Robert Smith of “Goldings”. They have since been demolished.

That same year, in 1861, the company bought in Butcherly Green, near the Ragged School, three cottages for £200. One cottage, having only two bedrooms, was refurbished and a wash-house with a third bedroom over added while the other two cottages were razed to the ground and rebuilt. The Company intended that each cottage should have a garden to permit the free circulation of air around the properties and, at the same time, give the children somewhere to play. They were built under the supervision of Thomas Smith and were erected at a cost of £190 per pair, against an estimate of £195, which naturally pleased the Company.

The policy of the Company was, now it seemed, to be of improving existing property and rebuilding rather than erecting on new sites. At the second annual general meeting Robert Dimsdale declared that the Company should concentrate on the courts and alley ways of Hertford. These had by now fallen into the hands of speculators with little interest in the well-being of their tenants. He mentioned also that six cottages in Port Vale had been bought for £600 which after refurbishing were expected to bring in an annual rent of £40.

The Company however will be best known for erecting, in 1864, the Prince Albert Model Cottage on a site known as Russia Court. The “Mercury”, in reporting on the Company’s annual general meeting in February 1864, referred to “two houses fronting the main street in Cowbridge which had been pulled down and on their site an Albert Model dwelling to contain four separate tenements was being erected at the cost of £415.” It also reported that, during the course of demolition of the two cottages, a tablet dated 1590 was found in one of the cottages. A sketch of these two houses is among a collection of drawings by Thomas Luppino, at the Central library in St Albans.

The Company now looked at the possibility of building a lodging house in the area for which Thomas Smith prepared a design. It was to include accommodation for thirty-seven single men at an estimated cost of £800 but the lack of a suitable site put paid to this plan.

The ”Mercury” regarded it as contrary to the aims of the Company to provide a pair of double beds in which two men, complete strangers, were expected to spend the night. The single cells were extremely narrow, with only a foot between the beds, and the wooden partitions between each cell were so low that by standing on a bed it was possible to look into the next cell. The Company, in defending the provision of a pair of double beds, merely said that it did not expect the lodging house to be full on every occasion and therefore expected a single bed each was the most likely outcome. It was built to house sixteen men.

The paper summed it up by saying that this model lodging house at Ware was not that which could be reasonably expected for young single men who were expected to pay four pence for an overnight’s stay, two shillings for a week’s lodgings or four guineas for a year’s lodging. At the annual general meeting, in February 1866, Robert Dimsdale reported that the Ware Lodging House was not the success hoped for.

At the Mayor’s dinner in 1868, Robert Dimsdale M.P. in his capacity as the Managing Director of the Hertford Building Company paid the following tribute to his friend and colleague, Thomas Smith now Mayor of Hertford, during an after dinner speech:

“..He believed he might say that the Society could never have carried out its plans, had it not been for the services rendered by Mr Smith as its honorary architect”.

By the late sixties things were not quite as the directors had wished for despite a full valuation of the Company’s property by Thomas Smith in 1867. The capital was all but exhausted and with the apparent lack of funds and interest it was difficult to see how the Company could extend its field of operations. Early in 1869 there was a suggestion that, as there was no more capital available, the Company should be wound up but it sold three cottages in Port Vale and two in Cowbridge which, after paying off the bank loan, left a surplus of £159.8.11d at the end of the year. By 1871 there was no real improvement in the financial affairs of the Hertford Building Company but even so shareholders at the annual meeting unanimously requested the directors to carry on. Robert Dimsdale, however, thought differently and said that the Company should be wound up. A resolution to that effect was put to the meeting and passed.

At the final meeting of the Company on March 14 1874, the accounts were passed and the small surplus donated to the local hospital. Thus the Building Company ceased to exist.