You are here: Home>Topics>Hertford and Ware Local History Society>Thomas Smith: An Architect of Note>ARCHITECTURAL WORK 1823 - 1849 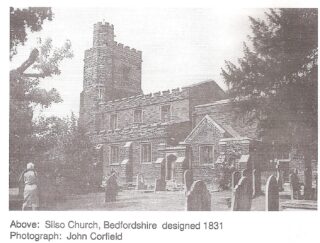 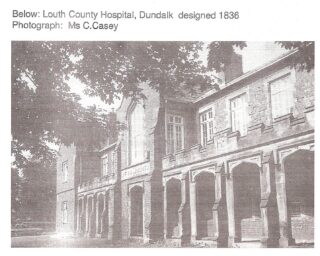 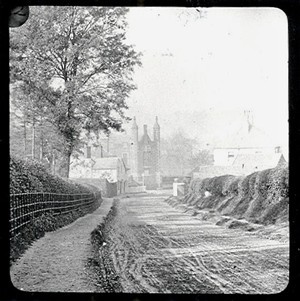 Thomas Smith’s earliest known commission was for four cottages in Brickendon in the February of 1823. His first work in Hertford involved increasing the seating arrangements in All Saints Church1.

Unfortunately there was some difficulty in settling the final account with Samuel Andrews, the builder. Both appealed to the Building Committee with the result it settled matters by dealing directly with Andrews and on 25th October 1825, Smith informed the building committee that the work had been completed to his satisfaction and that both the “plasterer and

painter could be paid. Smith does not appear to have worked again at All Saints’ until 1865 when he was once more involved with increasing the and other refurbishments.

In 1826, Lord Grantham, first President of the Institute of British Architects, employed Smith to supervise the building of the lodges Park in Bedfordshire which Grantham had designed himself. Two years later he again employed Smith, this time to report on the condition of Cain Hill House, which had been built in the grounds of Wrest Park in early 1700s. Smith was required to make a report and to submit and to submit proposals but in the end it was decided to demolish the building. In its an iron column, designed by Lord Grantham was erected in memory of his aunt, the Countess Jemima de Grey.

In the same year Lord Grantham decided to add a tower to the old church at Silsoe and commissioned Smith to survey it. Smith considered the bell turret and its supporting walls were unsafe, that some of the structural timbers in the roof were decayed and the north and south external walls were inches out of the vertical. He recommended that the tower be taken down and part of the west wall rebuilt. The work was put in hand but the tower collapsed during its construction due, according to the “Hertford Mercury”, to stones not having been properly bonded together. It also reported that a clerk of works had not been employed and the architect only visited occasionally. Rather than rebuild from scratch, a decision was taken to provide a new church on a fresh site. Nicholas Pevsner in his ”Buildings of England” series refers to St James, Silsoe as being ”an amazingly early case of archaeologically knowledgeable imitation by T. Smith of Hertford.”

During the 1830s Thomas Smith became involved with alteration work to houses in Ireland. The Rev James B. Leslie, in his book “The History of Kilsaran” (1908), wrote that Braganstown House had been remodelled in the Elizabethan style by a Mr Smith an architect from Hertfordshire “who had designed Louth hospital in Dundalk and had remodelled Barmeath and Bellingham Castles etc.” Leslie’s use of “etc” implies that Smith had worked elsewhere in Ireland but no further information is provided.

The Hertford Infirmary was the first of the two hospitals with which Smith was involved in this period and most of the information concerning it comes from reports in the newspapers. No contemporary documentation such as drawings, specifications or letters by Smith seem to have survived for either hospital.

The “County Press” for the 10 January 1832, reported that proposals for the new Infirmary, to replace the existing dispensary then housed in buildings attached to Hertford Castle, were to be discussed. The paper, however, was doubtful if the site offered by William Baker of Bayfordbury was suitable as the noise from the nearby linseed oil mill (Horns Mill) was likely to be troublesome. These doubts were well-founded as it was decided to look for another site, one less likely to be troubled by the noise emanating from the mill’s stampers.

Four possible sites were found and a plot of land belonging to Earl Cowper was chosen. The committee reported that it had been ready to receive proposals from local architects and builders but had only received three replies and only that submitted by Thomas Smith was acceptable.

On the 17 July 1832, the Dedication Stone was laid by the Bishop of Lincoln. The silver trowel used in the ceremony and suitably engraved to mark the occasion is in the possession of one of Thomas Smith’s descendents. The new Infirmary opened, with a matron and an intake of four in-patients on 6 July 1833. The building committee, under the chairmanship of Mr Abel Smith, paid Thomas Smith a handsome tribute referring in particular to their confidence in him as their architect and to “the fidelity” with which he discharged his engagements. The report also included the committee’s approval of Smith’s layout and remarked upon the spaciousness of the wards but lamented the use of iron windows which had let in the rain.

The Infirmary (now called “The County Hospital”) was designed in the Classical style. The main elevation includes a pediment, with sculptured figures within the tympanum·, supported by four pilasters rising from the first floor level. Unfortunately, the simple but pleasing façade has been spoilt by the introduction of extra windows, even so, enough remains of the original elevation to be able to imagine how splendid it must have looked when new.

Hertford, contributed the princely sum of ten shillings to the building fund. George Bosanquet and Messrs Christie and Cathrow paid for the stock bricks used. The surviving portion of the Clock Tower is pleasing but is lost amongst today’s development.

Smith’s other work in this period was mainly concerned with parsonages either building new, such as Newnham and Weston both near Hitchin in 1836 and 1838, or repairing old. Newnham vicarage was to replace the one which Smith swore on oath, to be ”so small, inconvenient, illconstructed and dilapidated as to render it expedient that a new house be built.” Repairs and alterations occurred at Stevenage (1835), Leckhampstead (1836) and Letchworth (1839). Smith, while working on the new vicarage at Weston, was asked to make a report and estimate for repairing the church roof. Reports and estimates were part of Smith’s every daywork.

In May 1839, the foundation stone of St John’s Church, Harlow, Essex, was laid by the Marquess of Bute. Thomas Smith was, according to a newspaper report, the architect for the church which was built in the Early English manner. He was also involved with the preparation of a plan and specification for enclosing the burial ground at St Mary’s Church, Ware but of this minor work there is no detailed information.

The 1840s were just as busy for Smith and in 1847 he had the additional duties of being the County Surveyor for Bedfordshire. Smith’s church work consisted of a new chancel for Holy Trinity, Weston, in 1840 and an embattlemented south transept at St Nicholas, Stevenage, in the following year. He also designed the new Holy Trinity, Wareside, which was a chapel-of-ease for the large parish of Ware

Holy Trinity, Wareside, was built largely through the influence of the Rev H. Coddington who was interested in adapting church architecture to ritual. He particularly wanted the new church to be of the “basilica plan” and Smith obliged. The Bishop of London consecrated the new chapel-of ease before a congregation of over six hundred people in 1842 and “The Hertford and Bedford Reformer” reported;

“The Architect Thomas Smith Esq of Hertford has displayed in the design a correctness of taste which has already ensured him a very high reputation in his profession and which has elicited him the approbation of some of the best judges of architecture in this country. We understand that Professor Whewell pronounced the Chapel the most perfect specimen of pure Norman style in this country.”

Thomas Smith prepared a design tor the new church at West Hyde near Rickmansworth and the original set of ten numbered and approved drawings prepared are at the County Record Office, Hertford. This was towards the end of 1843.

In 1847 Smith was recommended by Lord Grantham, now Earl de Grey, to the Clophill parishioners to design their new church. St Mary’s, Clophill, Bedfordshire, is described by Nicholas Pevsner in his ”Buildings of England” series as being “an archaeologically convincing job, that is to say, a church which the casual visitor might regard as genuine.” The “Hertfordshire Mercury”, in July 1849, carried a detailed report of the consecration ceremony and praised Thomas Smith for the design “of a very neat edifice, well adapted to the requirements of the parish”.

Smith was also involved with two new parsonages during the 1840s namely the rectory at Orsett, Essex, in 1841 and the vicarage at Kilnwick Percy,Yorkshire, in 1848. The Kilnwick Percy Estate was owned by Capt Arthur Duncombe, a cousin of Thomas Slingsby Duncombe, M.P. for Hertford from 1826 until 1832.

In September 1849, following public complaints, an inquiry was held into the state of the churchyards of both All Saints’ and St Andrew’s, Hertford which the local paper reported at length. The Inquiry was told that it was quite usual for four or five skulls to be turned up each time a new grave was dug in St Andrew’s churchyard and to be thrown back in. This was hardly surprising since no record had been kept of where bodies had been interred. The grave-digger agreed that the spot for a new grave depended largely on how easily his iron probe went into the ground and the resistance offered by the coffin of the previous burial or burials. Further use of the churchyard was banned from September 1849.

In the previous April the Vestry of All Saints had reluctantly agreed to its churchyard being used as a temporary measure. A committee was formed, of which Thomas Smith was a member, to look for a site fora cemetery for St Andrew’s. A suitable, 2½ acre plot was found which was purchased from Earl Cowper for £312. William Wilds, a local architect, prepared the plan and specification for the new burial ground while the main entrance gates and enclosure railings were to the original design by Thomas Smith which had been used at the Hertford Infirmary.

The new cemetery, was completed by June, 1851 and in the same year Thomas Smith was instructed to prepare plans and costings for a cemetery chapel. It was built by James Pulham of Broxbourne and demolished in 1983 after a report on its structural condition.

The 1840s had opened for Thomas Smith with designing his first school, the Cowper Testimonial School, Hertford. It was erected by public subscription in recognition of the good works and kindnesses of the great Hertford benefactor, Henry Cowper of Tewin Water, known locally as ”Father of the Poor”.

“The Hertford and Bedford Reformer” for 1 February 1840, contained a long report on the Cowper School Fund and the proposal that the testimonial should take the form of either a statue of Henry Cowper or that of a school. Public opinion favoured a school despite the cost. It was designed to accommodate 200 boys and a 100 girls together with a recreation yard and a house for the master. “The Reformer” described the design as being very neat and in the style of the Tudor Gothic. The building was demolished in the 1960s to make way for road improvements.

The 1840s ended with Thomas Smith designing a new block of sixty cells together with an Infirmary for the Huntingdon Gaol. The Building Committee had recommended that Smith’s proposals be adopted rather than those submitted by the Inspector of Prisons, Colonel Joshua Jebb, later Sir Joshua Jebb. By December that year the Visiting Justices were of the opinion the cells were ready for occupation. However, they were not pleased by Jebb’s delay in honouring their request that he visit the new block to inspect the cells. Could this have been a snub by the Colonel because his scheme had not been adopted by the Magistrates in the first place?

During this decade Thomas Smith also carried out work on the Hertford, St Albans and Bedford Goals and these are dealt with separately.