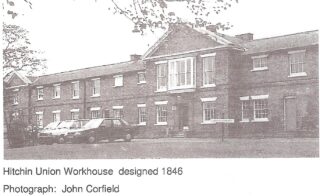 The “Poor Law” (Amendment) Act 1834 stated that all relief should be offered in well-appointed workhouses and that outdoor relief should be stopped. It also recommended that parishes should be grouped together into Unions and managed by Boards of Guardians made up of elected representatives from the parishes.

This triggered a boom in work-house construction which lasted several years. The Hertford Union decided to alter the All Saints Workhouse in Hertford rather than build a new one and Daniel Hollingsworth, a local architect, was selected to carry out the alterations. It is not known whether Thomas Smith “pitched” for the work.

In the 1860s, Smith’s advice was sought on major alterations. He prepared plans and an estimated cost which were harshly criticised. One guardian commented that “…if the issue to be decided upon were erection of a new house or the adoption of the plans by Mr. Smith they would no doubt reject those plans and build a new house”.

In March 1867, the Board of Guardians decided to build a new central workhouse for 250 paupers and a site in Peg’s Lane, Hertford was chosen. However there was such public indignation over this choice that it was abandoned and another, off the Ware Road close to the existing workhouse, was chosen instead.

A month later the “Hertford Mercury” carried a notice inviting architects, builders and others to submit plans, elevations, sections and specification for a new Union workhouse and infirmary. The Board specified that it was “to be a good substantial brick building with no unnecessary ornament and capable of holding 160 persons”. It was to include a separate ward for tramps and cost no more than £8,000. A premium was not offered and the chosen architect had to discuss his fees with the Board.

The response to the invitation was good and the “Hertford Mercury” reported that seventeen designs had been received from which six had been selected for further consideration. The paper enthused about the entries and suggested that “from an artistic point of view the most attractive designs are those submitted by Thomas Smith & Son, Mr Hooker, Mr Peck and Messrs Messenger & Co. The designs of Messrs Smith, all of them in pencil, are exquisite”. The Guardians eventually selected the design submitted by Mr Peck of London placing those entered by Mr Hooker and Messrs Thomas Smith and Son in second and third place respectively.

Smith, however, was selected to design the new Union Workhouse for Hitchin. In November 1835, the Guardians instructed their building committee to “treat with a Mr Thomas Smith, architect, of Hertford, upon the subject of his becoming the surveyor for the building of the new workhouse and to report their opinion”.

The committee reported back that it had met Mr Smith and discussed the conditions upon which he would prepare the necessary drawings and specification and also supervise the work. A fee of £75 was agreed and Smith offered to guarantee that it would not be exceeded.

The Board of Guardians sent the drawings to the Poor Law Commissioners for their approval which was given provided “the external wall of the second storey shall be not less than a brick and a half in thickness”. None of Smith’s original drawings of the layout exist but an old O.S. map indicates that the main part of the building had two storeys and was symmetrical about a central axis, on which lay the main entrance. Single storey wings extended westwards from both pavilioned ends and also along the central axis to accommodate the dining/chapel area. The areas between the wings and central projection would have been enclosed with a boundary wall and used as exercise yards.

Smith’s design does not appear to have been influenced by any of the model layouts which Sampson Kempthorne had prepared, for the Poor Law Commissioners, as guides for building a new workhouse. As all the tenders received were over £3,000 the Board made a number of alterations producing an amended tender of £2,650.

Work was completed by December 1836 and Thomas Smith, having inspected the new workhouse, wrote to the Guardians to say the building was ready ”apart from a few trifling matters” which would be dealt with. In 1838, the Board of Guardians decided to close down that part of the old workhouse still in use and move it into premises to be erected at the new workhouse. The overall cost incurred was not to exceed £1,500 and Smith was approached by the Clerk, William Stevens, for both a specification and plan.

Work started in July 1839 and by early October the roof was almost complete but not by the date stipulated in the Agreement. Thomas Smith advised the Board of Guardians that he would allow the contractor an extension of three weeks due to wet weather but reported that he was not satisfied with the general progress of the work. As a result the Board decided to invoke the penalty clause but to assess the amount at the end of the contract.

Over the next twelve months the new accommodation for the paupers was found to be wanting and during the winter the old workhouse had to be reopened for three months to cope with the extra number of paupers and their families. Things did not improve and, in February 1842, the Medical Officer recommended that the workhouse should accommodate no more than 200 paupers despite being built to house 260; there were 312 inmates at the time of his inspection. He found the workhouse to be badly ventilated and he also complained of “the filthy effluvia which meets one on entering some of the rooms.” In the School, boys were sleeping seven to a bed with three at the head and three, in some cases four, at the foot. There was insufficient accommodation provided for the sick and maternity cases which were placed in rooms that were brick paved with doors opening directly onto the yards.

The Board discussed the Medical Officer’s report and rebutted all the criticisms which had been made. It considered the Medical Officer had “looked upon the workhouse rather with respect to its fitness as an Infirmary rather than a place for the reception of paupers.” Further improvements were made but the Board of Guardians went directly to the original contractor who sent plans to the Poor Law Commissioners. The Commissioners, while approving the proposed alterations, recommended that the Board should employ a competent architect and surveyor. Thomas Smith accepted the commission for a fee of twenty guineas.

The Hitchin workhouse building essentially still retains the character imparted to it by Thomas Smith in his original design of over 150 years ago despite the many later additions.