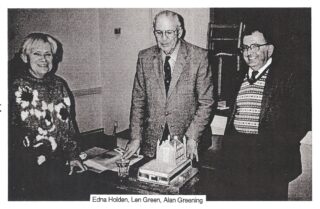 Edna Holden, one of the Society’s founder-members and its third and longest-serving Chairman, sadly passed away on 19 July this year, aged eighty-one.

Edna was born in a suburb of Liverpool and her first job was as a clerk with the Liverpool Gas Company. During the Blitz, the family was bombed out of its home. In later years she came south to Hertfordshire where she eventually took advantage of the teacher training scheme for mature students and became a member of the staff of Wormley Primary School until her retirement in the 1980s.

When Edna first contacted me in 1979 she was still living in Glenester Close, Hoddesdon, but shortly afterwards moved to what was to be her home for most of the rest of her life, Knights Court, Standon. She loved Standon, rapidly settled in and made friends, and acquired an impressive knowledge of the village and its history. ·

From the outset Edna was an active member of the HWLHS Committee and in May 1983 became Chairman on Dr. Peter Fogg’s retirement. A regular contributor to the Newsletter, she also led two guided visits to Standon and was a loyal supporter of the coach excursions I organised over the years. It was a remarkable feature of those excursions that only on the very last of them – to Lewes in 1998 – did anyone get wet! I used rashly to boast that I could control the weather, but Edna always insisted that it was our joint presence that guaranteed high pressure, claiming, tongue-in-cheek, that she performed, not a rain-dance, but an anti-rain dance on the preceding evenings! Edna could sometimes be forthright, but her sense of humour was infectious.

She contributed “An amble around Standon from a historical perspective” to the booklet ”Exploring Standon Parish” in 1997 and two years later wrote the definitive illustrated guide to St. Mary’s Church, Standon, herself providing the illustrations. I was, in a sense, a guinea-pig for this one, the text being tried out on me prior to printing, a labour made doubly pleasant by a meal in the “Star” beforehand – by no means the first time I had experienced Edna’s kind hospitality! ·

An interest she developed while living in Standon was art, becoming an enthusiastic and talented artist in both pencil and water-colour.

I think it was increasing difficulty experienced in night-time driving that precipitated her retirement from the Chairmanship in 1993, after ten years in office, and also from regular attendance at meetings. At the AGM we presented her with a token to purchase artists’ materials and I am sure she made good use of it.

For a number of years Edna insisted that she intended moving to the Isle of Wight to be near her daughter Catherine and the family. I don’t think many of us really believed it would ever happen, but last year it really did, and she moved to Banchurch. Alas, she was not to be there long. For a time she had experienced heart problems, and in July these and Alzheimer’s finally took their toll.

On ; 2 September a memorial service was held at Standon Church attended by family, and friends, including eight members of our Society.