You are here: Home>Topics>Hertford and Ware Local History Society>H&WLHS Journal 2003>Hertford in the Future - from The Hertford Directory 1904

Hertford in the Future - from The Hertford Directory 1904 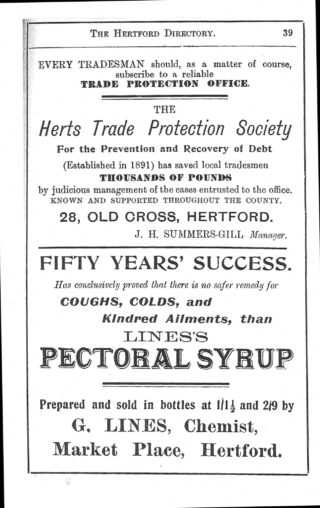 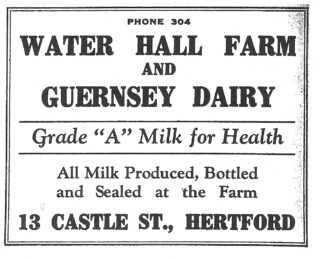 ”The town has progressed in the past, therefore there is every reason why it should go forward in the future and our children and grand-children will probably find more in their philosophy than we have dreamt of. For instance, are we to suppose that the building in which our city fathers and county magistrates assemble, will be allowed to continue an eyesore to all who gaze upon it during the coming years? Will not its monstrous ugliness in the course of time cause the members of the Herts County Council or some other body that may be in existence, to consider the desirability of removing the building from off the face of the earth, notwithstanding the new kitchen and Mayor’s parlour? Will it not be considered an obstruction to the principal street of the town? And would not the space it occupies, be well suited for the erection of a drinking fountain, or a statue of the king, or a local museum? Improvements are in the air, and it cannot be altogether a dream that something of the sort will happen, and to go a step further why should not our old town be further improved by the removal of other blocks of buildings which are unsightly and obstructive?

”Again, we can look forward to the city fathers in their wisdom developing and carrying out schemes for the better housing of the labouring classes, by the construction of municipal dwellings, model lodging-houses, baths wash-houses and· other improvements. Likewise we may presumably expect that the present number of public-houses and beer-shops will in the course of a few years decrease and that those remaining will not be more than sufficient for the requirements of the inhabitants. Our ideas may be rather Utopian, but there is no reason why we should not have a block of municipal buildings in the centre of the town in which the whole of the work of the Town Council could be carried on, and with a Town Clerk’s office, a Rates office, Council Chamber and other rooms all under one roof. May we not also look forward to the time when there will be electric trams running through the town from Ware and other places to the new station [not at that date open, or indeed constructed] of the Great Northern Railway in North Road, when passengers by the G.E.Ry. will not be compelled to walk half a mile to catch a train at the G.N.Ry. Station or vice-versa, but that we shall be sufficiently civilised to enable us to have through carriages.

”And other matters will possibly claim attention such as the widening of Mill Bridge, so that the present congestion of traffic there, will be prevented. The making of a new thoroughfare (from Cowbridge through the Folly to Bull Plain) would help to solve this problem…………..of course Hartham will be improved now that the Corporation have obtained powers to deal with that picturesque spot, and we can conjecture a band-stand, kiosk, a bowling green and places for various amusements being provided and the whole locality rendered suitable as a people’s park and recreation ground, without encroaching upon the rights of the commoners.

”Can we not also look · forward to the time when all our streets will be paved with wood when there will be hydraulic lifts for weary foot passengers wishing to ascend the Bengeo and other hills, when there will be a destructor to consume all town refuse and when the vital question of the disposal of sewage will be successfully and satisfactorily settled. We can hardly hope that the rates and taxes will be totally abolished, but we can look forward to their being considerably reduced. Nor can we expect that poverty will cease from our midst, but when old-age pensions are granted, the deserving poor will have something to look forward to, and to be able to finish their days outside the workhouse.

“One thing is absolutely essential and will soon be a necessity, and that is a cemetery for three of the town parishes; possibly a crematorium will have to be provided for those who prefer that method of dealing with bodies after death. And now that the Education Bill has become law, we can, we hope, safely look forward to improvements in the bringing up of juveniles who are so plentiful in this town – the due development of their intellects attended to, thus enabling some of them to become more useful members of society than formerly.

“We may also presume, may we not, that· the towns of Hertford and Ware will shake hands and be joined together in such a manner that it will be difficult to know where one town begins and the other leaves off, as in all probability the whole of the land on each side of the Ware road will be built on eventually. Probably, too, Hertingfordbury may be connected with the town and so become a suburb of Hertford, with omnibuses and trams constantly running thereto. Factories may spring up ail round us causing the inhabitants to flourish. Electricity may entirely supersede gas for motive power and lighting throughout the town.

”And if our theories should be· anything like correct, our suppositions true, our hopes even partly realised, we can imagine that our town has a prosperous future before it there is no doubt ‘that those who live longest see the most’ but it behoves every one who loves the town and its associations, to take a lively interest in all that conduces to its welfare, and endeavour in every way to make “Hertford in the future” a great success.”