You are here: Home>Towns & Villages>Bengeo>People>Miss Mary and Miss Charlotte Gosselin of Bengeo Hall 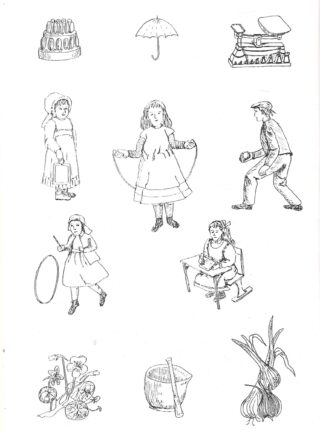 In Holy Trinity Church Bengeo, there are two fine stained glass windows dedicated to the memory of these ladies. One window was paid for by subscription from their friends in the parish; the other was paid for by family members. Why were the parishioners so grateful for ”the love and example” given by these two ladies?

Mary and Charlotte were the younger daughters of Admiral Gosselin and his wife Sarah nee Hadsley of Ware Priory. The family home was at Bengeo Hall. Mary was born in 1814 and Charlotte in 1815; neither married, they died within days of one another in 1892 as the result of developing pneumonia after suffering from a prevalent ‘flu virus in the winter of that year. Both ladies had been comfortably provided for by their late father and according to the Revd. Philip Deedes, who preached at the special service held in 1893 for the dedication of the windows, the ladies chose to reside in Bengeo: “ ….. instead of selecting the Metropolis or some other busy city, where they could have gone into society far more than they did and have enjoyed the pleasures of this life had they been so minded.”

In fact, both ladies did spend time in London and Europe for holidays but they made Bengeo the focus of their philanthropic work. The preacher at their funeral service stressed that they had been kind to the poor of the parish and to others in need of what today would be called ”support or counselling.” 11God only knew how many had been benefitted and how many were missing those kindly helps, those friendly visits.”

Using the Hertfordshire Mercury reports of the funerals, the records kept by their nephew, in the 1880s, of the donations for the rescue work on the much neglected and abandoned St. Leonard’s Church, and the log books of the schools in Bengeo, I found some examples of the ladies’ kind activities. They sent food for the soup kitchen that was run in Port Vale for the hungry and destitute; they gave furniture for the newly opened Bengeo Working Men’s Club; they gave donations for decorated windows in the new Holy Trinity Church and also for general restoration work of what was known as Bengeo Old Church (St. Leonard’s).

The school records were, however, the most revealing as to the· ladies’ consistent involvement in local affairs. There are reports of their weekly visits. They each took lessons in Scripture and Reading. The inspectors had reported that the children· were very noisy. It is quite likely that after the lessons the ladies went home with headaches. Nothing daunted them, however, and when the head of the girls’ school was ill: ”….the school was carried on by the assistants and assisted by the Rector and Miss C. Gosselin”.

When practical cookery lessons were introduced for the girls, Miss Gosselin (Mary the eldest) was present at the first series of lessons. Both ladies must have been really pleased in the July of 1890, when the boys’ school received a very positive report from the inspectors:

”This is a decidedly good school. The boys are intelligently taught and exhibit commendable interest in their work.”

According to the Mercury reports, everyone in Bengeo was shocked and saddened by the sudden deaths of Miss Mary and Miss Charlotte. However, when the windows were dedicated in 1893 it was decided to make the occasion a joyous one of thanksgiving for their lives and their kind and positive work for the community of Bengeo. The service of thanksgiving was combined with a flower festival in the church. The Bengeo Cottage Gardeners had their Autumn Show in an adjacent field. There were also to be village fete activities, such as races, for the children and the band of the 1st Herts Volunteers was engaged to play a ”Pleasing selection of music”. Alas! That quirk of English weather occurred, dreaded by every organiser of outside events in this country. It poured with rain so hard that the outside events had to be postponed!

The windows are to be seen in the north aisle of Holy Trinity Bengeo. The ladies are buried in a grave in the churchyard of St. Leonard’s, Bengeo.

from HALS at County Hall Hertford.

Extracts from the Hertfordshire Mercury 1892 and 1893.