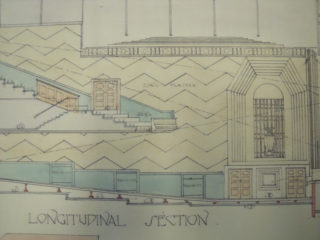 Poltergeist, one of the last films to be shown

Hertford’s impressive Art Deco County Cinema opened in 1933 and was far grander than the other cinemas in town.  Designed by Edgar Simmons, ‘The County’ was billed as a luxury place of entertainment.  It was built in just six months and boasted over 1000 seats, a café and car park.

By the 1970s, cinema-going was in general decline.  In 1972 plans were drawn up to split the building and give half of it over to bingo.  Mecca was interested in buying it and converting the entire building for bingo but neither happened.  The cinema became drab and unfashionable and certainly not a desirable place to spend the evening.

The County was the first cinema I visited as a child around 1979 – my mum took me to see Sleeping Beauty and it was all very exciting.  In October 1982 it finally closed and the last film to be shown was horror flick ‘The Entity’, despite an 800 strong petition started by a nineteen year old film student.    At the time, it was the last cinema in East Herts.  One fifteen year old Bengeo resident said he had only been there 3 times in 3 years, mainly due to the fact that most of the films were x-rated.

Fairview Homes approached the council with a “sympathetic” scheme to convert the building in to offices but instead the whole building was demolished and replaced with a bland block that remained empty for some years.    Despite its Art Deco heritage, the building was not listed and in the 21st century, similar buildings are still at risk.  And Hertford still doesn’t have a cinema.