A thousand years of history 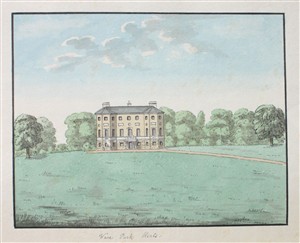 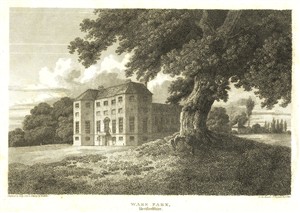 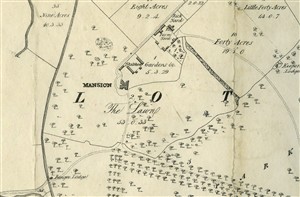 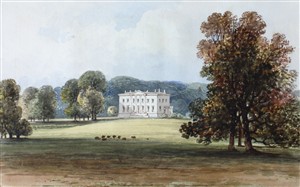 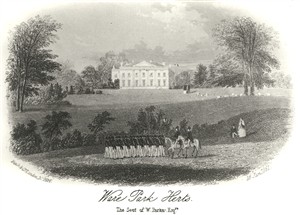 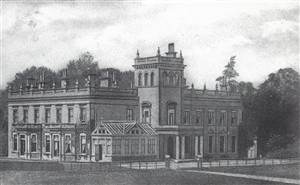 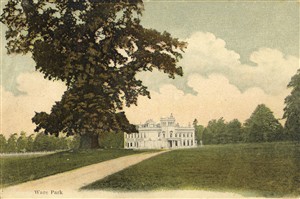 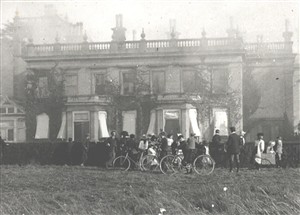 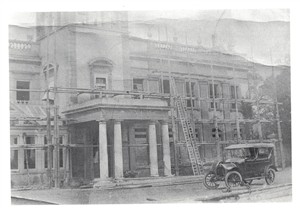 The house being rebuilt
Hertford Museum 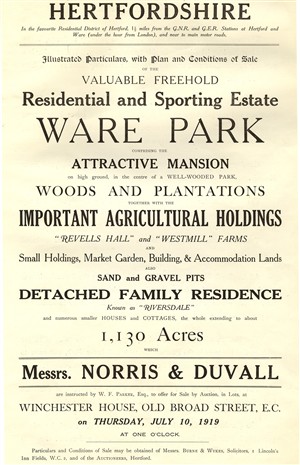 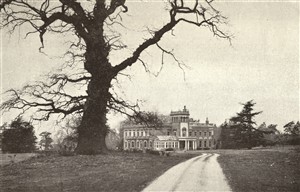 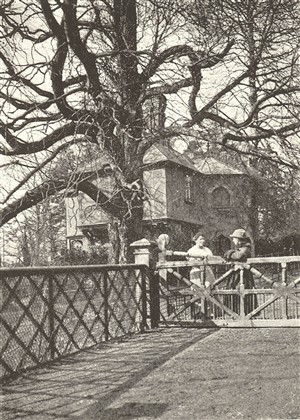 Ware Park Lodge from the sale particulars in 1919 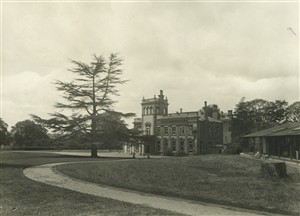 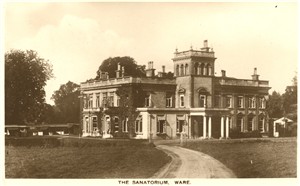 Another view from the 1920s
Hals 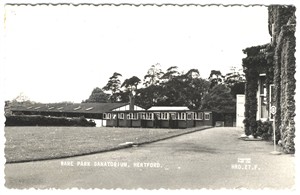 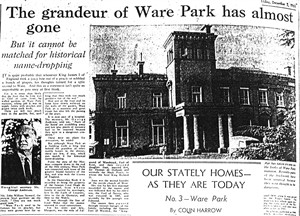 An article from The Mercury in the 1960s 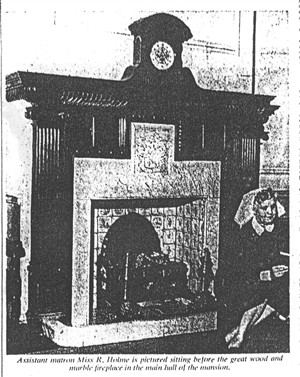 Matron by the fire place, The Mercury, 1966
Hals 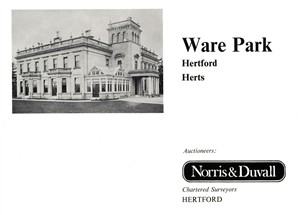 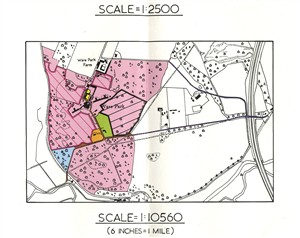 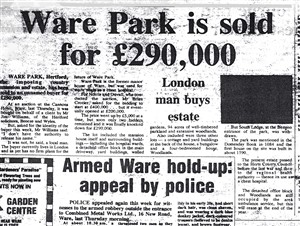 From the Norman Conquest to the 16th century, Ware Park was connected with some of the greatest feudal families of the day.  In the Domesday book, it is recorded as being the property of Hugh de Grentmasnil from whose family it passed by marriage to the Earls of Leicester, then to the De Quinceys and then to the Wakes.

In the mid 16th century it was sold to the Fanshawe family and Thomas Fanshawe built himself a new mansion.  His son, Henry, was a great gardener and Ware Park became famous for its peaches – so much that King James I ordered grapes and peaches to be sent to him twice a week.  The Fanshawes are buried in a vault in St Mary’s Church.

The Tudor mansion was demolished and rebuilt on or near the same spot in the late 18th century by Thomas Byde, an MP. Unfortunately, we don’t know what the Tudor house looked like.    The house standing today is the third incarnation: it was rebuilt again around 1875 in the style of an Italian villa by William Parker, whose family acquired the estate in the 1820s.

In 1911 a fire was discovered in the servants’ quarters and despite the combined efforts of Hertford and Ware fire brigades, the house was completely gutted.  A breeze fanned the flames and the roof collapsed as volunteers frantically passed (and threw) clothes, furniture, bedsteads, ornaments and paintings from the windows. A local photographer, Mr Elsden captured the event.  At the time it was leased to a Dr Cumberbatch and his family. The damage was estimated to be £10,000, the equivalent of nearly £4m today. The interior was rebuilt not long afterwards in the same style by Mr Parker, a wealthy man whose main seat was in Cumbria.

In 1919, the whole estate was put up for sale.  This included Revells Hall in Bengeo, Ware Park Mill and Westmill Farms, brickfields in Ware, cottages, sand and gravel pits, and the 20 bedroomed  mansion, totalling 1,130 acres.

The Sanatorium and a new chapter

Hertfordshire County Council was looking for somewhere to build a new TB Sanatorium and Ware Park looked the best option. A site in Willian was earmarked but was deemed too expensive.  Until then, Canons in Ware was being used for local sufferers. (Canons became the Roebuck Hotel, now demolished).  On 20th June 1920, the council were asked to approve the purchase Ware Park mansion and 112 acres to be used as a sanatorium for 132 patients and the necessary staff for the sum of £25,000.  A further sum of £39,000 was required for adapting the buildings and in purchasing some huts for rebuilding at Ware.

There were arguments over the cost of Ware Park but in the end, it was decided that there was no doubt for the necessity of the sanatorium.  It was opened in a ceremony by the marchioness of Salisbury on Monday 7th May 1923.  The first Matron was Miss M Sutton who was previously employed at Canons, on a salary starting on £140 a year.  £4,000 was spent furnishing the building, including: £193 on bedsteads £317 on bedding £500 on x-ray equipment £169 on cooking utensils

The advancement of scientific understanding of tuberculosis, and its contagious nature created the need for institutions to house sufferers.  At the time, there were 400 people in the county suffering from TB.  Until antibiotics were discovered, patients were given the “fresh air cure” and lots of rest.  This included patients sleeping on outdoor verandas and some can just about be seen in postcards of the time.

TB is an infectious disease which usually attacks the lungs and has been around since antiquity.  Over the years it was also called consumption, wasting disease, scrofula, the White Plague, King’s Disease and many other names.  It was not until the 1940s with the development of the antibiotic streptomycin that effective treatment and cure became possible. Although widely eradicated in Britain, there are still a few thousand people with the disease but hundreds of thousands more around the world, mainly in poorer countries.

On 24th September 1940, a parachute mine fell just over 100 metres from the sanatorium.  It became entangled in a tree and failed to explode.  The patients were evacuated while the mine was made safe by the Royal navy.  Someone suggested that if the mine was displayed in the Priory grounds, it could be used as a showpiece to raise money for the “Ware Boys at The Front” fund so it was taken there by council workmen.

It remained there for 5 days until a passing serviceman said it had not been fully diffused.  This caused a panic and it was quickly moved to Brazier’s gravel pit in nearby Watton Road (where the Vicarage estate now stands).  Despite its proximity to houses, the mine was exploded on 30th September and a large crowd gathered on Widbury Hill to watch.   The explosion caused considerable damage; one house was totally destroyed and three more had to be demolished.  Several houses in Watton Road lost their roofs and 300 more had varying degrees of damage.  It turned out that the mine had been part of a raid which had killed three people in Hertford.

By the 1960s, the hospital catered for all chest and respiratory complaints and had around 150 patients and 50 staff.  The mansion was used for staff quarters and offices which included kitchens for the hospital, dining and recreation rooms and other facilities.  Essentially, it was much the same as when it was a private house.

Age and neglect began to take its toll and the building was beginning to crumble.  Parts of masonry had to be removed as they were in a dangerous condition and the hospital was no longer self-sufficient.  It struggled on until the early 1970s when, against much criticism, it closed by the Regional Health Authority.  Unfortunately, the records have not survived.

In 1980, the estate was sold for £280,000 at an auction at the Canons Hotel in Ware.  The buyer was not a local man who (according to the auctioneers) had no firm plans for the park.  The lot included the mansion house itself and surrounding buildings (including the hospital wards) office, walled gardens, 94 acres of parkland and extensive woodlands.  Later on, the house was divided into luxury apartments.