CLOSING OF THE V.A.D. HOSPTAL AT WARE 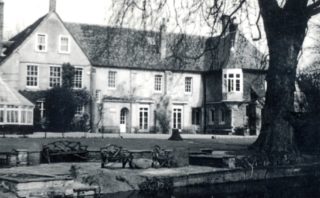 Ware Priory - from the river
Hertfordshire Archives and Local Studies

Whatever may be said as to the town of Ware not rising at times to events as occasion may seem to require, it must certainly be acknowledged that Ware has tried to do its best to alleviate the sufferings and heal the wounds of the many gallant men who have been overseas and engaged in warfare since August 4, 1914. In March, 1915, the Priory was opened as a V.A.D. Hospital, and except for a short break of about three months owing to a slackening of effort at the Front, it has remained open till December 31, 1918, and has proved of incalculable benefit.

On the 2nd inst. a farewell supper to the· staff was given, followed by a selection of music, and the distribution of certificates to several of those who had rendered valuable services, the following being the recipients: Dr. W. G. Stewart (commandant), Mrs. W. G. Stewart (matron). Mrs. Edmund Pearce (head cook), Mrs. W. S. Ward (quartermaster), Miss G. Trower (late quartermaster), Miss Lovick, Miss Clift , Miss Spicer, and Mrs. Willmott {nurses), Miss Gisby {linen only}, Mrs. Burson (head laundry woman). The last named, although being entitled to payment, gave a huge amount of time and labour quite voluntarily.

Mrs. W. S. Ward, in her position as quartermaster, had a most difficult task to carry out, in as much as she had to see to the food being regularly supplied, and since the rationing orders have been in force this has proved no easy matter, But with a pertinacity of will and tact she has managed the catering with consummate success. Not only had the Hospital to keep going in the day-time, but a certain number of assistants had to be requisitioned for night duty and with the exception of the Sister, who was paid by the Red Cross Society only three of the nurses were remunerated.

A very pleasing item during the proceedings was the presentation to Dr. and Mrs. W. G. Stewart, of a silver rose bowl, with the following inscription : ‘Presented to Dr. and Mrs. Stewart by the Staff and workers at the V.A.D. Hospital in remembrance of work together. 1915-1918.’ Dr. Stewart, in returning thanks, said it was not so much the gift so far as concerned, but the happy thoughts which inspired it. Their work had been very pleasant together; he had had a good staff of nurses and workers and the Hospital had certainly done its share in the world’s tragedy in trying to give relief to the sufferers. Since the Hospital had been open nearly 800 men had passed through and these had spoken most highly of the treatment received and comforts afforded them while remaining there.

For Christmas, festivities were arranged, and thanks to the generosity of Mrs. Croft, a splendid dinner was provided, consisting of turkeys, ham, sausages, desserts, crackers, and not by any means the least Christmas plum puddings. made in the good old English style and given by Miss Weir, of Amwell Bury, the whole repast being much enjoyed. Games, competitions, etc., were indulged in afterwards and on the Thursday a whist drive was arranged with prizes, which were subscribed for by friends. The festivities were continued on Friday by an entertainer, Mr. A. Beck. From London, brother-in-law of Dr. Stewart, who gave some clever items in the programme.

On Monday, the 30th inst., a farewell supper and concert was arranged when several of the old Ware boys were invited. Miss Walker, with her group of artists was present to entertain during the evening. Then on Friday, of last week (this being arranged before the authorities knew of the hospital being closed) Mr. Frederick Chester, of London, gave an entertainment, the returned prisoners of war being in the town over the week-end were invited. Refreshments were provided as a result of the whist drive in the schools during December.

Mrs. Croft and the Committee are very grateful for all the that has been done by the people of Ware and surrounding district, since the hospital has been in existence for undoubtedly the friends have subscribed liberally and supported the Institution in many ways so as to add to the comfort of the men, as many letters from the men will testify.