Early Life, the War and School 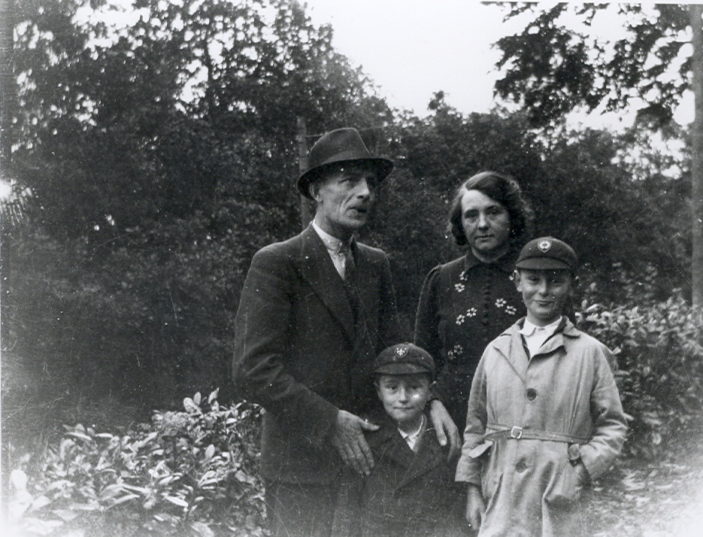 I was born on Armistice Day, the 11th November – not, I hasten to add, 1918, but in 1934 – and as many people will know, the sale proceeds of Memorial Poppies are placed into Lord Haig’s Fund. Haig was Douglas, Earl of Haig, and this was the source from which my Christian name came. I first saw the light of day in the Salvation Army Mothers’ Hospital in Lower Clapton, East London, and it has been quite amazing just how many friends and acquaintances over the intervening years, were also born there. 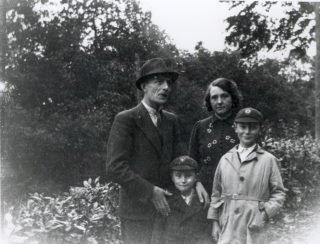 My early years were spent in what were then brand-new flats, or “artisans’ dwellings” at Guinness Trust, Stamford Hill – connected to Arthur Guinness and his family of brewers, and the Iveagh Bequest – and were uneventful until that is, 3rd September 1939. My brother Stan and I were evacuated with my mother (because I was under 5 years old at that time) to the Stageman family at 87 Hinton Way, Great Shelford, just outside Cambridge. My father stayed at home in London, working nights, including fire-watching duties, as a postman at Upper Street Islington Sorting Office. Dad had volunteered in 1916 as a 16 year-old and been accepted into firstly, the London Scottish Regiment, then had served with the Notts & Derbyshire and the Middlesex Regiments before being demobbed in 1919. I well remember his driving licence – issued to him as a GPO employee without ever taking a driving test – having an endorsement and a 30 shilling fine for doing 28mph in a 25mph zone during the Blackout in his post office van. He was at the time on official duty, but the fine had to be paid out of his own pocket!

Our stay in Great Shelford could not have been very long – it was the “phoney war” period – and we returned home after a few months. The onset of the Blitz in September 1940 brought about another sudden change. We had endured nights in the underground shelters built amongst the flowerbeds and in the railway embankment in the flats, and watched the searchlights and gunfire flashes from our darkened-out landing window four floors up, but when we were roused from our beds to see the glow of London’s Docks burning, it was obvious that something had to be done. Stan and I were once again packed off through Church Street Stoke Newington School, with mother staying in London to carry on with her job at the Money Order Department, Manor Gardens, Holloway (it was the national savings certificate office, a semi-governmental job) going off each morning carrying her gas mask and a grey coloured tin helmet. 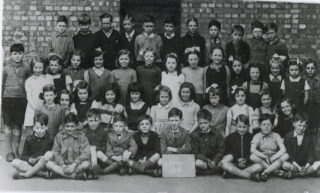 Stan and I were taken from our school with many others, packed into London Transport double-deck buses and taken to Paddington Station, there to board a train bound for the West Country. We ended up in a village called Oakford, 4 miles from Bampton and 10 from Tiverton, and we were the last two children to be billeted – nobody it seemed, wanted two boys aged 9 and under 6 who steadfastly refused to be separated. We were finally taken in by the Clark family at Steps Cottage, Oakford, (a dark, damp thatched bungalow dangerously close to a road built into the side of a forested hill) largely I believe, because of the extra money by way of government grants paid to them. Was it fifteen shillings a week for the first child and twelve-shillings-and-sixpence for the second? Plus of course, the extra rations by way of our children’s green ration books.

Mr Clark worked as a cowman at the nearby Stuckeridge Estate, and whilst we were not actually ill-treated, life was very harsh and basic. The toilet was of the bucket type which had to be emptied frequently, and we two boys, plus John, the Clark’s son, were positively encouraged to use the forest rather than the toilet (having first found an adequate supply of dock leaves). Mrs Clark and daughter Rosie were excused this process.

Mealtimes were something of an ordeal. It was more than one dare do, to reach out for anything without first having said “please may I have….” To do so would incur a swift rap across the knuckles from a long cane accurately wielded by Mrs Clark We seldom if ever saw our egg or butter rations, and our school lunch consisted of thick brown bread spread with margarine and Demerara sugar, to be washed down with a sterilized-milk bottle full of cold tea made the night before. Only last year I learnt from my brother that the ‘milk’ in the tea wasn’t – it was in fact, WHEY! Stan knew this, because as he was older that me, he had to collect it from the Stuckeridge Estate where Mr Clark got it free of charge. Stan clearly remembers being severely told off for helping himself out of a milk vat – that is, before the cream had been separated from it, to be used in the manufacture of cheese, butter or clotted cream. Needless to say, our cold tea went straight down the drain each day.

When evacuated, Stan and I were wearing our school blazers. When Mrs Clark found out that mum had made them herself, she wrote to her to try to get one for John. The only instructions mother received was “John’s not so tall as Stan, but bigger about.” The blazer was duly constructed (I’m not quite sure what happened about the clothing coupons) and when mum delivered it, it fitted John a treat! 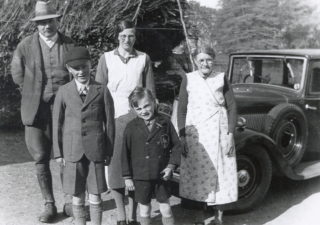 Mr. Coles, Dorothy and Mrs. Coles with Stan and Doug

Our unhappiness with our surroundings and Mrs Clark’s illness resulted in our being moved into several different temporary addresses. We remember with great affection, Mr & Mrs Bastow – Bert and Mabel – at Pincombe Farm, plus our final home at Manor Farm actually in the village, with John and Clara Coles and their daughter Dorothy. This really was Heaven! A working dairy farm with cows, sheep, chickens and ducks, pigs, ferrets, three dogs and countless cats and where the two main sources of power were three cart-horses and the stationary Lister engine in the barn, and transport was by way of the family Armstrong-Siddeley saloon car, and Dolly, the pony, with trap if necessary! There were flower gardens, vegetable plots and soft-fruit areas, plus three apple-orchards to provide the necessary raw materials used in making vast quantities of rough cider made under their own cider-press. Beautiful! 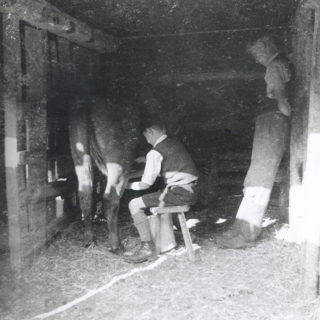 Brother and I thoroughly enjoyed our stay there, helping out with the animals, harvesting both hay and corn, muck-spreading, hunting rabbits and trapping moles, threshing, milking by hand, sheep-shearing and so on. Every evening the milk was put through the separator (turned by hand by we two brothers) and on Saturday morning the cream went into the churn to be made into butter – again turned by we two. Then Stan spoilt it all by passing his Eleven-Plus examination, which meant that he was brought back to London to be placed into a Secondary school in the Summer of 1942, and I followed him home some months thereafter, to return to Church Street School.

Our family endured the V.1 ‘doodle-bug’ attacks with stoicism, but shortly after the V.2’s started, I was evacuated again, by myself this time, into the Cambridgeshire Fens to the village of Manea, eight miles from March, being placed in the hands of John & Mabel Wayman, together with their sons Jack and Peter, who was my age. They lived at ‘The Old Crown’ – yes, a pub, albeit a modest village one, which nevertheless still sold beer and cigarettes for consumption off the premises. Suddenly, Smith’s Crisps (at 2d. per bag and with the little blue twist containing salt), became freely and readily available, together with bottles of lemonade and Tizer (4d. a bottle to everyone

else) and dare I say it, packets of 20 ‘Craven A’ cigarettes, all too often ‘liberated’ by Peter without his parents seeming to notice, to be smoked by us whilst bird-nesting (his hobby, not mine).

Peter had a pet rabbit, and later we managed to catch a baby wild one, which I adopted. Both were extremely well looked-after, but wild rabbits kept in captivity have a habit of growing very large. All went well until one weekend when mum came to see me. I was out playing when she said goodbye and went home – not alone, it must be said. Shortly after she had gone, I noticed that my rabbit had gone, too. Well, there was a War on, meat was on ration, but rabbits were not. So mum, dad and my brother Stan ate it!

The last V.2 rocket fell on London in March 1945, and I returned home for the third time shortly thereafter, and to Church Street School. In ’46 I was sent to Enfield Road Central School, just past Dalston. This school had been a Rest Centre for bombed-out families in the War, and was only now taking in pupils again. 1951 was a landmark year for two reasons. Our school was to enter students for the very first-ever GCE examination; and I had met Sylvia, the girl who was to become my wife – and Bulawayo Association member.

Of about 100 or so pupils at school at the end of their fourth year who were eligible to go in for this exam, in fact only 8 did so, five boys and three girls. We were not allowed to take more than six subjects, but could take fewer, and reluctantly, I had to drop French. Only two boys entered and passed all six – English Language, English Literature, Mathematics, Geography, History and Commerce (which consisted of shorthand and book-keeping). They were Roy Ashton, and ME!