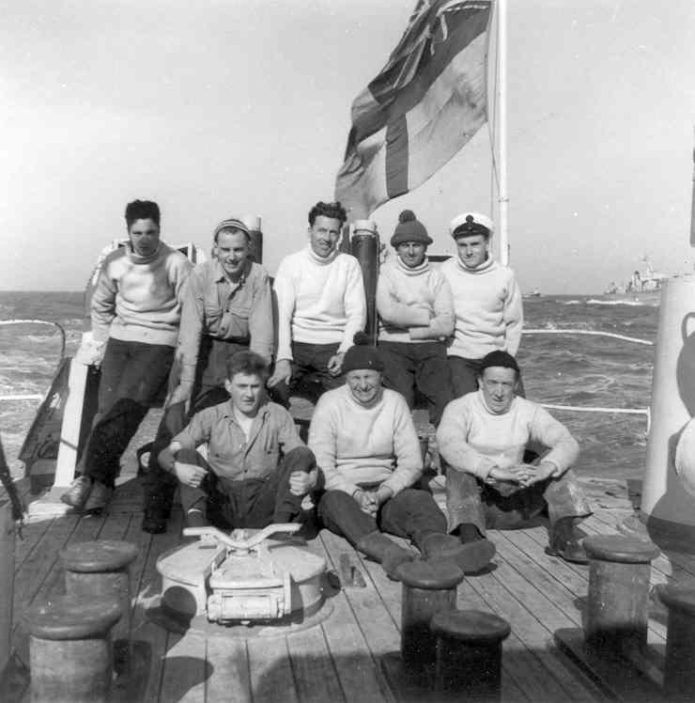 Whilst I was out of the Navy, I nevertheless returned to RNVR, where I continued to serve until 1968 – about 16 years all told, but more of this later. The immediate problem was to get a job. I went for two interviews on the same day, one with the Royal London Mutual Insurance Company and the other with the then Westminster Bank, and was offered both positions. In fact I took the bank job (cheap house loans for staff!) and stayed with them for a total of almost 38 years, starting my career in their Spitalfields Market branch, followed by Tottenham, Hertford, Upper Holloway, Highgate, Hornsey Road, Enfield Town, Enfield Highway and finally Waltham Cross branches.

Sylvia and I had married in August 1961 – Maurice travelled all the way down from Northumberland to be my Best Man – and we were able to move into a brand-new house in Ware, Hertfordshire, on our return from honeymoon (remember the concessionary staff house-loans?) and that is where we still live to this day. We have had two children, Robert, born in 1965 and Jennifer in 1967. In our effort to bring them up to be independent we succeeded beyond our wildest dreams – Jenny married a chap in the RAF and now lives near Elgin, not far from the former RN Air Station now manned by the RAF at Lossiemouth, whilst Robert married a lovely French girl when working out there and recently bought a house near Lyons. To crown their (and our) happiness they have produced two grandchildren, Thomas, born in January 2006 and Romain, in January 2010. Our children therefore live over a thousand miles apart and we’re roughly in the middle!

The Westminster Bank, being an instrument of government policy, had to encourage us reservists by providing us with 14 days’ extra leave (with full pay) each year to enable us to carry out our Sea Training, when we also received RN pay. I therefore made sure that I went away for every one of the 15 years, even though I would have qualified for the Queen’s Bounty each year if I had only trained for twelve.

You could claim one ‘fallow year’ in five, but I did not let the bank know this. These periods away were a welcome break from banking, and enabled me to get an operational flight in a naval fighter out of RNAS Eglinton just outside Londonderry, to go helicoptering from both Lossiemouth and Yeovilton, serve in the frigate H.M.S.Jaguar, and spend as many periods as possible at sea in the RNVR tender, a Ton-Class coastal minesweeper which was always named “Thames” – several of them were bruised whilst in our hands!

One event that gave me a great deal of satisfaction occurred early in May 1966. We had sailed from H.M.S.Vernon on 30th April and were operating out of Lowestoft. Leaving port at 0500hrs on Friday 5th May, it was intended that we should take part in an all day and night minesweeping exercise, but we were diverted to search for a USAF Phantom jet fighter that had ditched into the North Sea. Our Skipper was particularly keen that we, as the London Division, should find the aircraft first, and it was actually I that spotted the very first piece of wreckage, mainly I suspect because my private pair of binoculars were 10 x 50’s, whereas the Admiralty-pattern ones in the hands of the lookouts were 8 x 40’s. Of the two-man crew, there was unfortunately no sign.

My wife Sylvia had worked for the Prudential Assurance Company in Holborn until she had our first child, then some years later was lucky enough to get a part-time job in the local Ware branch of what was by then the National Westminster Bank. Whilst I had always been happy in my work, I was never ambitious and had no intention of trying to ‘reach the top’ – my near-death experience in October ’54 had taught me that there were more important things in life, and that every single day since then has been a bonus. So it was that Sylvia and I were both offered voluntary early retirement on the same day with effect from the end of September 1992 plus immediate pensions, an offer which we gratefully accepted. Thus ended a period of continuous employment of over 41 years (July 1951 to September ’92) in which I was never out of work.

We now both continue to grow old (dis)gracefully, following our hobbies and interests. One continuing one is delving into our family histories, and there is always of course, decorating and gardening if one is ever at a loss for something to do. Then there are our naval interests by way of the Nelson Society, H.M.S. Bulawayo and Ceres Associations.

One final thought. I joined our ship after all the other Association members had left her, and shortly after I did so, she was broken up, my photographs arguably being the last-ever that were taken of her. I am therefore left wondering if I am the ‘Sprog’ of our membership, if someone in their seventy-second year can be referred to as such.