Doug as a boy 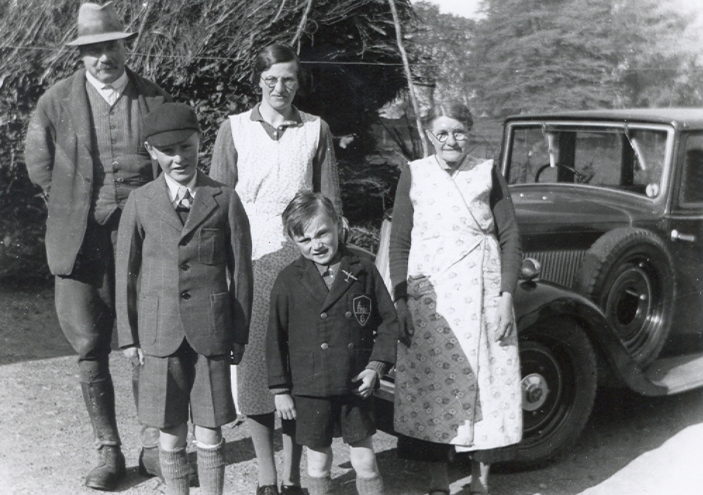 This is Doug Andrews talking about three periods of evacuation during the Second World War.

When the war started very early in September 1939 children under 5 had to be evacuated and because of their tender age their mother or their father had to accompany them, so when my brother who is three years older than me, and I were sent away, we also went with my mother.

Because it was a phoney war, after a period of perhaps six to eight months we returned home to London and we were sent away again when the blitz started in September 1940. We had by then spent evenings in the air raid shelters, underground air raid shelters, and some nights we would stay in the flats where we lived, we were three floors up, and if we felt that the bombers weren’t in our area, we would stay where we were. And I clearly recall being got out of bed and shown the glow in the sky that was the London Docks. Shortly after that my brother and I were evacuated through the school down to Devon where we were passed from place to place until we settled finally on a dairy farm which was a wonderful experience.

My brother made the cardinal sin of passing the 11+ and his London exam success was not recognised by the Devon education authorities. As a result he was returned to London to go to school there. Some months later, I also was brought back.

Then the V1 rockets started falling around London and this was June, or shortly before D-Day June 1944. I was then sent off for a third period of evacuation into the Fen district of Cambridgeshire, a small village called Maney, near March, near Chatteris. In recent years I’ve often speculated as to how did the London authorities knew where Maney was because there was one street which led nowhere.

Another aspect of evacuation has often crossed my mind, was I more in danger of being killed when I was supposed to be in the safety of the countryside, or would I have been safer at home, because a twin engined German bomber crashed in walking distance of our farmhouse in Devon.

A Mustang Fighter dived into the ground behind our school in Maney, the pilot had managed to bail out. A 4-engine Liberator bomber crashed and the tail plane fell on the land belonging to the people with whom I was billeted, er, and as if that wasn’t enough, because of the low lying nature of the Fens, any houses had very tall chimney stacks and one extremely draughty night, the chimney stack was in fact blown down and it fell through the slates onto the joists in the ceiling and it brought down the ceiling onto the bed where I was laying below it, and I have the habit of sleeping curled up in a ball which was fortuitous because I was unaware of anything until the lady, Mrs Wayman came into the bedroom, very concerned, she turned on the light and at that point I woke up and I’ve often said it was like being in bed with a broken packet of digestive biscuits. There was a large piece of plaster behind my head.

There is also an anecdote concerning rabbits. I was billeted with Peter Wayman, a boy of my own age. It was in fact a small village pub, but the alcohol was sold for consumption off premises, and they also had cigarettes for their regulars, usually Craven As. I’d fallen on my feet with this billet because we could help ourselves to packets of Smiths crisps and the bottles of Tizer and Peter, I’m afraid to say, often liberated a packet of Craven As.

Peter had a pet rabbit and it was thought it would be nice if I had one too and shortly after that we captured a wild rabbit, a baby one which we looked after very well, but wild rabbits in captivity have a habit of growing very large.

Before the war started I had been very attached to two small wooden boats which were played with when we had a bath, and having been evacuated without my boats I wrote home to my mother and asked her if she would bring them or send them to me but she said better than that, she would bring them down and visit us which she duly did. Having given me my boats, I then went off to play with them in the fields, and I didn’t return home until it was dark and I was hungry, by which time my mother had gone home, and she had also taken the rabbit, meat was on ration and it made a welcome extra meal for the family.