A little about Quakers in Hertfordshire 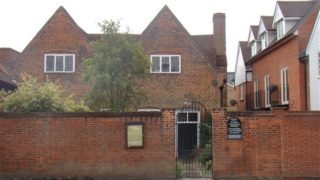 The famous Hertford Meeting House; the oldest of its kind in the world
Matthew Juggins

In the mid-17th Century, a time known for its political upheaval, there was also much religious upheaval in England. Puritanism and Presbyterianism were at the centre of it, but the Religious Society of Friends (or ‘Quakers’) blossomed from a movement of Christians dissatisfied with the existing denominations of Christianity in England in the 17th century, and wanted to return to a way of life based on their interpretations of early Christian communities. What George Fox (an English dissenter and a main founder of the Society of Friends) and his companions fervently believed was that one can have a personal relationship with the divine – the spirit speaking directly to the human heart – without the need for intermediaries such as priests or sacraments. Naturally such a radical view would not be one to be welcomed by greater religious authorities; and as ardent pacifists – their main testimonies are peace, equality (which led them to be amongst the earliest proponents of the abolition of slavery; as early as 1688), integrity and simplicity – Quakers would have to emulate Christ by turning the other cheek when faced with persecution.

Nevertheless, Quakerism survived, through thick and thin, throughout the centuries; indeed, from the 1860s numbers began to increase. Even today, there is a large Quaker community in Hertfordshire, with meeting houses (which welcome all comers, regardless of their own personal beliefs) in almost all of the county’s major towns – indeed, Hertford itself boasts the oldest purpose-built Quaker meeting house in the world (pictured); in Railway Street, in use since 1670. Thus the Society of Friends is very much deserving of recognition in this fair county which so many of them have called home since the time of the Protectorate when they were spawned… a peaceful, welcoming, friendly and purely & personally spiritual denomination of any religion is sadly not as common a thing as it should be. Hertfordshire’s deep-rooted Quaker connection is definitely something about which to boast!