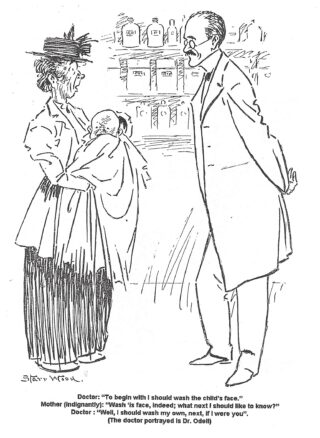 Doctor: "To begin with I should wash the child's face." Mother (indignantly): "Wash 'is face indeed; what next I should like to know?" Doctor: "Well, I should wash your own, net, if I were you." (The doctor portrayed is Dr. Odell) 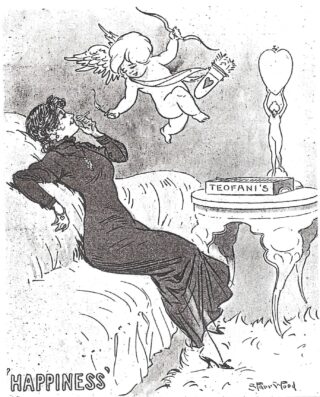 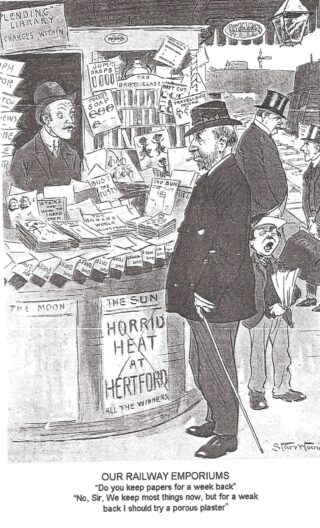 OUR RAILWAY EMORIUMS 'Do you keep papers for a week back' 'No, Sir. We keep most things now, but for a weak back I should try a porous plaster'

The 1890s and early 1900s were a heyday for caricature and comic drawing. It was a great age for the practical joke. Comic papers proliferated. We remember ‘Punch’ , but titles such as ‘Judy’, ‘Fun’, ‘Sketch’, and ‘Moonshine’, are long forgotten. In many ways, the laughter died with the First World War.

Three cartoonists of the period had close links with Hertford. One was a local boy, Alfred Nicholls (1868-1924). He was a member of the Nicholls’ brewery family and his home was in Morgan’s Road. Starr Wood moved to 15 West Street, Hertford, in 1908 and lived in the town for a little over ten years. His close friend, James Thorpe, (1876- 1949) followed him to Hertford and worked for the Hertfordshire Mercury using the pseudonym ‘Quiz’. Thorpe initially lived at the Salisbury Hotel, and then took lodgings above a dyer’s shop in Market Place. He stayed in Hertford until 1915. The Nicholls brewery and family home were in West Street. Alfred’s brother George and their two sisters lived there. Both Thorpe and Wood remained in close contact with the Nicholls family for the rest of their lives.

Starr Wood, whose father worked for H. M. Customs, was born in London on 1 February 1870 . When he left school, it was decided he should be an accountant. His heart was not in the job and he often spent time doodling. Probably as a result the company sent him to collect debts. This brought him into contact with the really poor, who in later years provided Wood with endless copy for his drawings. On one occasion he was sent to collect eighteen shillings from a muffin maker, with five children, living in a slum off the Holloway Road. After telling Wood that they had had nothing to eat but stale crumpets for the past week, the baker took him to an upper room and asked whether it would be possible to realise anything on the remnants of an umbrella that had been fixed in the roof to keep out the rain! Wood gave up on that debt.

After five years of figures, Starr Wood wanted to find a new direction. His father agreed to support him for a year while he tried out his skills as an artist. But there were handicaps. Wood lacked formal training and he was colour blind. Through hard work and a decision to work in black and white both problems were overcome. One of his drawings was accepted by a magazine called ‘Ariel’ in 1892 and his career as a cartoonist began. ‘Punch’ accepted a drawing in 1893 and in 1898 Wood became a regular contributor. His output was prolific and a number of comic magazines were happy to reproduce his work. He also produced several books such as ‘Rhymes of the Regiments’ in 1898 and ‘Cocktail Time’ in 1933. Of particular local interest is his ‘Special Constable’s Guyde’. This was published during the First World War and is based on his experiences as a special constable in Hertford. Local characters and local places are plentiful. Wood liked to draw from life and would drag people into his studio from the street. Thorpe describes how he once approached an interesting old reprobate holding a horse, by its head, in the street. Wood said ”I want you to come round to my studio just to make a few drawings”. “Lord luv yer, guv’nor’ said the man ‘I can’t draw!”

Pen portraits by our friends are probably the truest of all. Thorpe said of Starr Wood “he was a delightful person with a humorous outlook on life, particularly his own. He was quite irresponsible and reckless in his enjoyment of playing the fool.” Once when they were on holiday in Brussels, Thorpe dozed on a park bench, and awoke to find they were surrounded by an amused crowd. Wood was doing a hand stand. “Must do something to make the beggars laugh” was his explanation. On another occasion a group of friends chartered a boat for a holiday on the Solent. Wood took a number of disguises. Whenever they passed a smart yacht he would appear on deck in some outlandish costume. A member of an artists’ dining club; The London Sketch Club he would attend dinners dressed in a workman’s suit and cap. His antics provided endless amusement and stories for his fellow artists. He was an unpretentious man.

Starr Wood married in 1904. Winifred was his mother’s companion and had been widowed at the age of nineteen. They had one son. The move to 15 West Street, in 1908, heralded a period of great happiness for the Woods and their circle. It was a Georgian house with a wonderful garden that provided a home, studio and refuge for visiting friends. Thorpe saw active service in France during the 1914-1918 war and spent his leave staying with them. He has left us an idyllic description of their garden. “The trim velvet turf, the old brick walls of every shade of red and purple, the formal lines of espaliers, the joyous riot of flowering borders, the full scented tangle of roses growing over the pergola, beyond which the reddening apples and the first few yellow leaves told of approaching autumn – all this brought an indescribable sense of soothing peace and encouragement”. The West Street house was rented from the Benson family, having been bought by Mrs Edmunda Benson in 1898. Edmunda was the daughter of the artist James Bourne. (See HWLHS Journal 2000, page 19) No doubt the family were proud to have a famous artist living there.

Many graphic artists of the day visited the Woods, and they included H. E. Bateman, John Hassall and Frank Reynolds. These were exciting contacts for local men like the Nicholls brothers. For Thorpe and Wood, Hertford provided an ideal location as it was in the country and at the same time close to London. Wood was keen on golf and cricket. He loved cricket week and would draw caricatures of the players. He produced his own Christmas card and that for 1908 had a golfing theme.

Alfred and George Nicholls, Thorpe and Wood were all members of the Constitutional Club in Bull Plain where Thorpe usually had his evening meal. Wood was there that fateful night, 13 October 1915, when a Zeppelin dropped 44 bombs over the town in two minutes. Nine people were killed, six of them at the club. All Saints’ Church lost its organist and the Borough its surveyor. Describing that night, he wrote “In a life of thrills perhaps the most startling was when a Zeppelin bombarded the town. To be talking to half a dozen men one moment, and the next to be the only one left alive was a thrill not easily forgotten”.

Starr Wood’s hair was already white by the time of that never to be forgotten night. His hair lost its colour suddenly when he was only 27. He described an incident that occurred when he was sketching a woman, whom he had, as usual, dragged in from the street. She would not stop turning her head to look at him and in the end she blurted out “Excuse me sir, but are you what they call an albumen”.

His work was many sided and included advertising copy. For Teofani Cigarettes he drew a glamorous lady, sitting on an ample sofa, with cupid in attendance. She has a huge box of Teofani’s cigarettes, and the caption is ‘Happiness’. He was an acute observer of the styles and fashions of his day. One drawing shows a young woman turning up at the skating rink in a costume straight out of ‘Ballet Russe’. Another, with the caption ‘Many a girl acquires a bubble reputation in secret’ shows a young woman indulging in the new fad of a bubble bath. She stands in a washbasin.

In 1898 Wood became editor of a magazine called ‘The Windmill’. It was published quarterly but failed after only a few editions. The next journal was ‘The Snark’s Annual’. The title comes from the Lewis Carroll poem that has a style of humour akin to his own He provided all the illustration’s and styled himself ‘The Snark’. It was published from 1910 to 1935.

Starr Wood has left us some wonderful cartoons of Hertford life. He often used a local background and caricatured local people. One drawing shows the book stall at the old Great Northern Station (Cowbridge). James Smith is behind the counter. He was a man who lived for W. H. Smith and the Hertford Baptist Church and in 53 years he never had a day’s illness. Another cartoon depicts Sydney Harrington (1859-1946) in Honey Lane with Cupid who has mistakenly shot an arrow through his hat. Harrington was a local maltster who dressed like an 1890s dandy until the day he died. Another of my favourites shows Dr. Odell, a much respected physician and surgeon. The laughter is never cruel. It is said Wood’s wife, Winifred, often thought of ideas for his drawings .

After the First World War Starr Wood and his family left Hertford. They moved to Harpenden and spent the summers at Barton-on-Sea in Hampshire. Later they moved to Rickmansworth and it was there that he died on 2 September 1944. Such was his fame that he merited an obituary in ‘The Times’. His niece once described him as “full of fun” and it is this gentle fun that we can share when we turn to his drawings.

The author gratefully acknowledges the help received from the staff of HALS and the Hertford Museum.