You are here: Home>Topics>Hertford and Ware Local History Society>H&WLHS Journal 2001>The Pebble 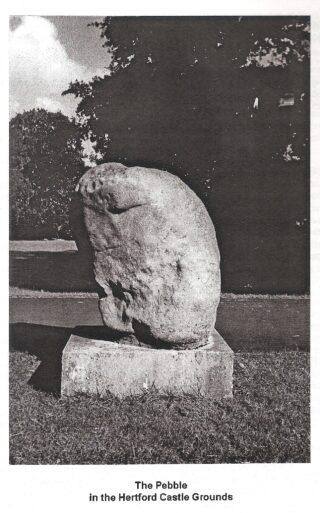 Since childhood I have been fascinated by the large stone that stands outside the Hertford Castle Gatehouse. It measures 391/12 ins in height, and 89ins in circumference and weighs a little over a ton. It was placed in its present position in September 1918 and stands on a plinth with the following inscription:-

This Pebble Stone marked the ancient Borough Boundary of Hertford in 1621.

1621 is the date of the survey of the Borough boundary made by Sir Richard Smith, surveyor general to the Prince of Wales. The honor, castle, lordship, manor, and town of Hertford had been presented to the future Charles I by his father in 1620. The relevant description of the boundary in the survey, runs as follows :- ‘and so meeteth with a street called Back. Street (now Railway Street), and so taking in the said street, cometh to a great pible stone, of half a cartload, lying at the north end of that street, and near unto the stile and gate of St. John’s churchyard.’ I am quoting here from Turnor. In brief the stone marked the point at which the boundary crossed the road.

St. John’s Church is first mentioned in 1209, when we have a record of the priest’s income. He had an annual stipend of 8s 8d, the mass pennies, the lesser tithes and altar bread, the offering at confessions, half the offering at marriages, 3d of the offering on Christmas Day, the offering at the first mass on Easter Day, and a loaf of bread and three gallons of beer each day. This was a good income. It is clear that the church was on the site of St. Mary’s Priory, founded 1087, and it seems likely that it was the nave of the priory church. The priory was abolished in 1539. Between 1535 and 1622 there are no surviving records of St. John’s Church. In 1629 Sir Thomas Willis of Balls Park built a new church. St. John’s parish was amalgamated with the parish of All Saint’s in 1638, and in 1680 the Bishop of Lincoln directed that St. John’s Church should be demolished. (Hertford was in the Diocese of Lincoln.)

A Hertfordshire Mercury correspondent in 1918 came to the conclusion that the pebble had stood five feet from the front of 73 Railway Street (the property has been rebuilt and is currently unoccupied – 2001). This property had been built along the line of the churchyard wall and covered the site of the gate and stile.

Back Street was a coach road out of Hertford and coaching inns were clustered at the town end of the street. The Bull was at the top of Bull Plain and next to it, in Maidenhead Street, was the Glove and Dolphin. The coach road was an important approach to the town and I suspect this is the reason that the Christ’s Hospital Gates are shown to the north of the school in the Drapentier print in Chauncy’s ‘The History of Hertfordshire’ published in 1700. The statues of the boys had yet to be placed on the gates but the intention had already been made public with an appeal that someone would provide them, but this did not happen until 1720.

The 1621 boundary, at this point, marked the line between the Borough of Hertford and Balls Park which owned the Manor of Hertford Priory. There remains the question, how long had the Pebble stood there and what was its significance in earlier times?

Two other local churches possess large pebbles. St. Mary’s, Hertingfordbury has a large boulder that once formed the base of a buttress. In 1890 it was standing in the grounds of the Old Rectory, close to the churchyard fence. It now forms the gravestone of Robert Addis (1878•1937) and his wife, Caroline (1880 – 1963). Their names are on bronze plaques screwed to the stone. This pebble is 42 ins high, 45ins wide and 24 ins thick.

Similar stones are built into the foundations of St. Peter’s Church at Tewin. These seemed to have been worked as they have regular edges. The visible parts of the stones measure 44 ins by 12 ins and 42 ins by 61/2 ins thick. Writing in the East Herts Archaeological Transactions in1904, the Rev’d Nairne speculates that the church may have had Saxon origins, in view of the fact that there were no windows in the north wall of the chancel.

In A.D. 601 Pope Gregory sent a message to Augustine via Abbot Mellitus. The following is an extract:- ….’We have been giving careful thought to the affairs of the English, and have come to the conclusion that the temples of the idols in that country should on no account be destroyed. He is to destroy the idols, but the temples themselves are to be aspersed with holy water, altars set up and relics en­closed in them’. Following this instruction churches were established on ancient sacred sites. Many churches have circular churchyards. Wales is particularly rich in ancient sites where individual stones and stone circles have been built into the church or the surroundings. At Ysbyty Cynfyn near Aberystwyth five large stones are embedded into the churchyard wall. Also in West Wales, at St. Tysilio’s Church, Llandysiliogogo, a large boulder rests beneath the pulpit. It came to light in 1890 and was too large to move.

Now for the speculation. Could our pebbles indicate ancient sacred sites? Was a church built in Hertford, in the vicinity of the pebble in the 7th century? Indeed is this the site of the Synod of 673? Clive Partridge has suggested that it might have been held at Foxholes Farm because of the Saxon buildings found there. Perhaps the two ideas compliment each other. Accommodation on high ground with a meeting place and landing stage near the river would make sense. The alternative view is that the pebbles are glacial debris, with the one at Hertford being used as a marker stone and those at Hertingfordbury and Tewin as building material.

Returning to the Hertford Pebble, it may always have been a solitary stone, or it could have been part of a group of stones. The priory church was a large one and in addition there were the monastic buildings. All traces above the ground were removed and no doubt the flint and stone was used for building houses etc. Any boulders would have been moved as well. Our stone could have been left because it was standing on the highway, marking a boundary. It now rests safely within the castle grounds. It is interesting to ponder that it might have been regarded as sacred in prehistoric times and could be the reason for the location of the priory founded by Ralph de Limesi in 1087.

The Story of All Saints’ Hertford 1992 edition