You are here: Home>Topics>Ware's Blitz 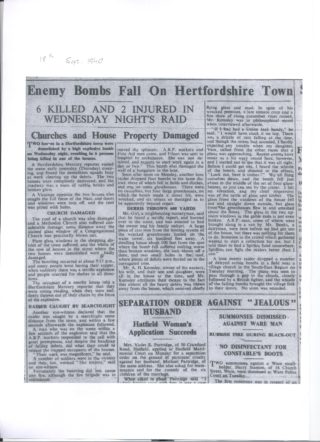 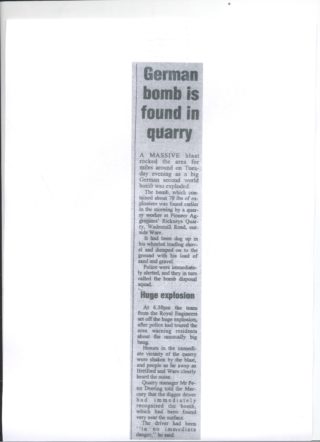 A later news article showing the scars of the war

Nearly 75 years ago the German army of the Third Reich had pushed its way through mainland Europe through destroying their enemies. The main form of warfare used by the Wehrmacht and Luftwaffe was a modern method named blitzkrieg, blitzkrieg is German for ‘lighting war’ due to the speed in which a country could be invade through this method, the method was to bomb the infrastructure and governmental buildings of a country and then have tanks and fast moving military units push in and secure the country, however it was a lot more difficult to execute blitzkrieg with no land to drive and march over. So Germany’s fuhrer Adolf Hitler came up with ‘operation sea-lion’ which was a form of blitz that would use the channel to the Germans advantage, they hoped to destroy the R.A.F and sweep in with soldiers etc. on the beaches of Britain but we all know how that went.

In this piece I will write about how the blitz affected my hometown of Ware and how the people dealt with its effects. Even though Ware is not considered a major town it had many raids throughout the time period of world war 2 (1939 – 1945) , one of the most lethal is on the night of the 18th of September 1940, it was claimed there was a lone bomber flying over ware that dropped only one high power explosive bomb on house on New Road (Ware) this caused the death of 6 people and injuring 2 more, this would not be the last raid, however it would be the most fatal. The spot in which this terrible incident happened is not known by many and has no recognition for those who lost their lives, instead it is the driveway (Dickenson Way) for Tesco Ware, have they no respect?

Another bombing raid which was aimed for a nearby airfield was on a farm in which a few were working, the 33 high explosive bombs narrowly missed them however one man did climb in to a crater, he died of what is thought to be another bomb landing next to him.

After the war all was deemed safe and everything went back to ‘normal’ until on the 28th of July 1989 a full 49 years after the bombs stopped dropping a UXB (un-exploded bomb) which was still live was found in a quarry along Wadesmill road, it is claimed that when the bomb squad destroyed the bomb it was a ‘huge explosion’ and that the noise could be heard in Hertford and Ware clearly. This proves that even after the fall of the Nazis and the end of the blitz the scars still remain today, so we must always remember that though it was 70 years ago we might still be in danger, so we must never forget the blitz on Ware in case one day you or someone you know stumbles on a bomb and doesn’t know about the danger and the lives those bombs took.