Opening by the Mayor

The opening of the school was not universally accepted as was demonstrated by the Mayor of Herford when he opened the school, “…although it was a pleasure to see the children housed in a new school he was ever mindful of the enormous cost of education.”  He compared the rate of 1s 0½d in the pound “which is to be levied this year with the 4d rate when the Education Act was passed a dozen years ago [1902] and which sum the nation was led to believe would never be exceeded.”

The Mayor wanted a limit for educational spending similar to that put on museum and library committees.  He said that the new school ought never to have been erected as the [Hertford] Corporation were unanimously against it on account of the expense.

The Hertfordshire Mercury reporter took issue with this, arguing that the point was that the charges should be Imperial [National] not local and “never be that cheese-paring policy which we sometimes see displayed when most vital questions are at issue.”  For a long time Cowbridge school had been overcrowded with the other schools in the town more than comfortably filled.  The reporter went on to argue that the school managers had made a mistake in not sending the girls as well as the boys to Port Vale as there was adequate accommodation in the new buildings.  Cowbridge School could then be utilised as an infant school entirely and so relieving the pressure on some of the other infants’ schools in the town.

Mr N Graveson, Chairman of the School Managers, wrote the following at the beginning of the logbook.
“This school was opened to receive pupils On Tuesday morning Apl: 13th 1915.  It was built to relieve the overcrowding of Hertford Cowbridge County Council School (Mixed and Infants) close by.  This school is for boys only the girls and infants remaining in the old school.
The Hertfordshire Mercury reported on 16th October 1915 that the new County Council School in Port Vale, Hertford, had been completed at a cost of £2,744 4s. 2d., being £119 15s. 10d. less than the estimate sanctioned.  This sum was exclusive of the salary of the clerk of works, quantity surveyor’s fees, and litho-graphic expense.

There were four teachers at the opening of the school.  Walter Turpin was head teacher and William Coleman Edwards was his deputy.  Both were certificated teachers.  They were helped by Lily May Allen and Jane E. Henry, two unqualified assistant teachers.  All had been transferred from Cowbridge School where Mr Turpin had been master since 1889.
107 boys were enrolled on the first morning and ten more boys joined during the first week.  By the end of the month the roll had risen to 124.
Mr Turpin remained as head of the school until he retired in December, 1922.  Unfortunately he had not been in the best of health for some time, and he died of a cerebral haemorrhage in March the following year.
In January, 1923 the school reopened after the Christmas holiday under the leadership of Edward Archer Upton who remained as head until the school ceased to be a boys’ school on 30th July 1931.  Major Upton then became headmaster of Abel Smith Junior School.

Following on from the Hadow Report, “The Education of the Adolescent” which was published in 1927, the schools in Hertford were re-organised in 1931 from all-through schools into a two-tier system with senior and junior schools.  As part of this re-organisation Port Vale became a senior girls’ school under the leadership of Miss K Davis. The girls’ school opened with 120 girls in September, 1931.
In 1938 the Cowper building was closed and the boys moved to Longmore whilst the girls (52) from Longmore Mixed Senior School were transferred to Port Vale.   Thus in September 1938 the number of girls at Port Vale jumped to 175.

The building was occupied only by the girls’ school until Thursday, 17th October 1940 when the younger children from Cowbridge Junior Mixed Infant School (Mistress Edith Bradbeer) came to share the site.  This sharing necessitated the working of a double shift system whereby one week the senior girls worked in the mornings and the younger pupils in the afternoon.  The following week the working was reversed so the junior and infants worked in the morning and the senior girls in the afternoon.
On 19th December 1940 at the end of the Autumn term, Miss Davis retired.  On the opening of the school in January 1941 Miss E. Rutter, the senior teacher, took charge of the school until 3rd March when Miss P M Hodges took up duties as the headmistress. 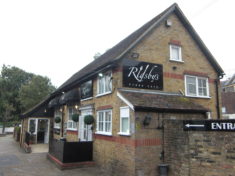 On 6th January, 1942 the Port Vale Girls’ School reopened with the girls split over three sites: 1st year girls (now Year 7) at the Longmore building; 2nd Year girls in two classrooms (Year 8) and 3rd year girls (Year 9) at C.A.W.G. Hall1 in St Andrew Street. This was to enable all the girls to have full-time education. There were 188 girls on roll, of whom 9 were official evacuees.  At that time children could leave school when they attained the age of fourteen.

From 28th June, 1943 all the senior girls were housed in the Longmore building (the old Hertford Grammar School building) and the school was now known as Longmore Senior Girls’ School. 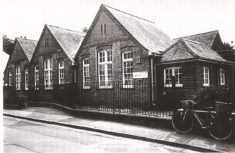 At the same time the JMI became known as Port Vale JMI and Edith Bradbeer continued as the headmistress, a post she retained until she retired on 22nd May, 1953.
Mr. Ronald W. Ekins was headmaster from 6th June 1953 to July 1955 when he moved to be headmaster of Morgans Walk Junior School.
Mr. A.N.C. Johnson was Headmaster from 8th September 1955 until 2nd April 1958 when he became headmaster of St. Mary’s School, Ware.