Memories of the Wardrobe Mistress 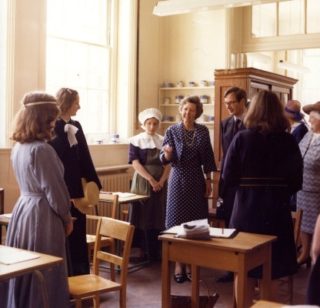 Me with the Duke of Gloucester
Veronica Humphreys 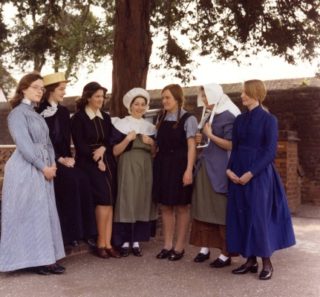 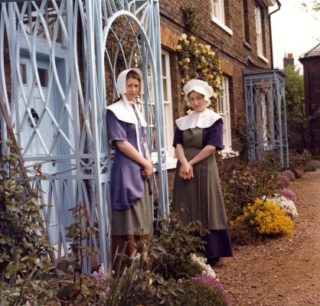 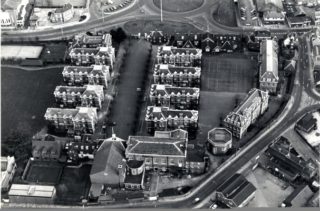 I was the Wardrobe Mistress of Christ’s Hospital School from 1969 to 1978. In May 1976 the Duke of Gloucester, who was the president of the school, came and spent the whole day with us, which was very unusual for royalty. These three photographs were taken on the day.

School uniforms throughout the years

The first photo is of me with the Duke explaining the replica costumes the girls were wearing. In the 17th century the school children had to make the clothes themselves.

The second photo shows girls in school uniforms throughout the years: the one in the centre is late 17th centrury then it jumps to the 18th and 19th centuries. Third from the right is a girl wearing a 1930s gym slip and the third from the left is the Sunday uniform with black and gold trimmings. The one on the far left is an original hand-made dress from the late 1800s.

The next photo shows two girls standing in front of the cottages, which are still there, wearing replicas of 15th and 16th century costumes.

On Founders Day they used to dress up in these costumes too. The school provided all the uniforms.

The fourth photo was taken from a hot air balloon of the whole school, which has now been converted to flats. The eight houses where the girls all lived are still there, although some of the other buildings have been demolished.

In 1979 we moved away to Norfolk and had 27 wonderful retired years, travelling around a lot. I came back in 2006 after my husband died and now live in Chauncy Court which is part of the old Christ’s Hospital buildings!