You are here: Home>Places>Ware Places>Memories of Ware, a local history walk on a sunny September afternoon.

Memories of Ware, a local history walk on a sunny September afternoon. 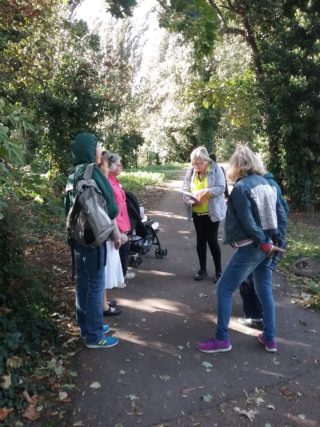 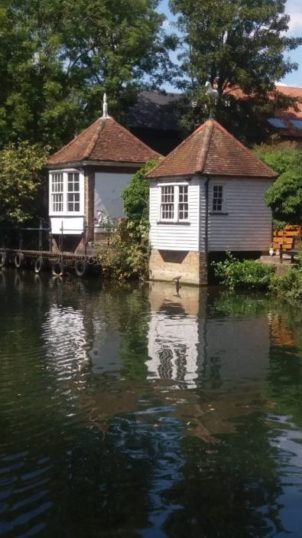 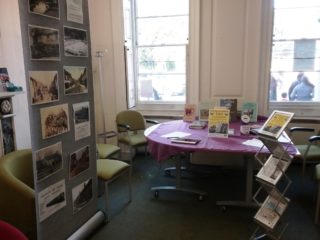 Ware is a town steeped in history with many memories and secrets to share if you look hard enough! The library service decided to run a walk from the library called “Ware Memories walk” with just this is mind. On a sunny but blustery Friday afternoon six people plus a baby (in a pram!) set foot from Ware Library. After hearing about the history of Ware and how it has been described as one of the oldest, continued occupied sites in Europe which grew up beside a ford across the River Lea, carrying the ancient trackway that later became Roman Ermine Street and the Old North Road, the main road of medieval England. we discovered that the Great Bed at Ware was kept at the Crown Pub on the site of today’s library. The Crown pub was knocked down in 1765 and in its place a large house was built by Henry Page one of the leading Malsters in Ware where he lived with his wife. In 1961 the house became a library.

Crossing over the road, you come to a massive bronze statue of a Malster and his cat standing in the Memorial Garden outside the church. The work of the sculptor, Jill Tweed, it was unveiled in the Millennium to commerate 600 years of the malting industry in Ware. The ears of the cat are shiny where they have been stroked by children! Behind the statue lies the church of St Mary the Virgin. The parish church of Ware, once a French owned Benedictine Priory it was rebuilt in the late 14th century by the family of Joan of Kent, the widow of the Black Prince and mother of King Richard II. You enter the church through the porch which was in the 17th century a meeting place of the inhabitants of Ware to choose Churchwardens and other officials of the town.

It’s a beautifully impressive church with many stained glass windows. Everybody in the group was invited to contribute their own stories and knowledge and we found out that stained glass windows were created for people who couldn’t read as the pictures told a story! In 1980 as part of the 600 years celebration of the church, the font which dates back to 1380 was renovated and church volunteers created and donated a tapestry they created of the High Street for the church.

After leaving the church the walk carried on along the High Street which was originally known as Middle Row, the south side of the street was known as Water Row and had the most pubs in a town in England. We saw several other locations which housed the Great Bed of Ware and heard some amusing stories of how the bed is supposed to be haunted and how it was omce said that 12 butchers and their wives slept in the bed, and later still, a whole troop of cavalry! The bed was of course a gimmick to entice people to visit Ware and spend their money in the pubs! It now resides in the V and A museum in London. The walk passed round the back of the High Street along East Street to view the entrance to Place House in Bluecoat Yard which was originally one of Ware’s two medieval Manor houses which in 1674 was acquired by Christ’s Hospital Foundation as a property to send younger children to live out of London in healthy country air.

The Malting Industry dominated the life of the town from the 17th century and Ware could justly claim to be the premier malting town in England making “porter”or entire the main drink of London’s labourers during the 18th century. Crossing over the road to Kibes Lane we went to look at the Southern Maltings Arts and Entertainment centre where you can see one of the original buildings where malt was made with the cowls on the roof. With Ware’s position between London and the and the barley growing counties in Suffolk and Cambridgeshire and it’s situation on the River Lea and its easy position to transport by barge to London by 1880 there were well over 140 malthouses in the town. Gradually these were passing into control of a handful of major malting companies, the greatest entrepreneur of which was Henry Page. However, the abolition of malt tax changed the face of maltmaking in Ware and gradually the industry diminished. The last Malthouse, a computerised plant in Broadmeads closed down in 1994 bringing to an end the 600 year old malting industry.

Just opposite the Southern Maltings Arts and Entertainment centre is the Friends Burial Ground, The Quaker meeting-house in Ware closed in 1864 and was demolished in 1881, but the burial ground remained in this small street just north of the town centre. It is now landscaped as a knot garden with three modern reproduction Quaker burial stones. The stones marking over 200 burials are long gone and one of walkers gave us a potted history.

Back out on to the High Street and across the road to the Saracens Head public house on the river. Sadly this is not the original building as this was demolished in 1957 to make way for a road improvement scheme but it was the last place that the Great Bed of Ware resided at before being sold off to pay for debts for outstanding repairs. The memories walk continued along the river to look at the renovated Gazebo’s or Dutch summerhouses which were built at the ends of the gardens by the river to get away from the noise of the inns. In the 1830’s there were 25 gazebos, but by 1980, only 10 remained. It was during the 1980’s the East Herts District Council stepped in and with additional funding from the Ware Society, they set about restoring the gazebo’s to their former glory.

It was a wonderful walk enjoyed by all and a lovely way to spend an autumn afternoon exploring just a fraction of the history of Ware, it’s amazing what you can find by just a bit of research and getting out there on foot to explore! The library at Ware has an excellent collection of local history books which is highly recommended.