You are here: Home>Topics>Hertford and Ware Local History Society>H&WLHS Journal 2004>HOME IS THE SOLDIER

HOME IS THE SOLDIER 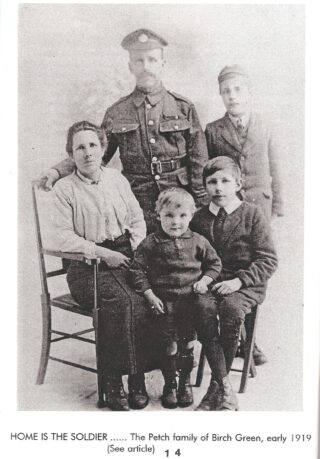 Every picture tells a story. Many thousands of photographs like the one opposite must have been taken during the 1914-18 War, in all the combatant countries. In Britain many still survive, in family albums, private collections, museums, even second-hand shops. Most were probably taken just before the soldier went off to the Front, and all too often were to be the last photo of him, as more and more perished in the senseless slaughter of that obscene conflict.

The Petch family group is, however, rather different. For one thing, it was taken early in 1919, and shows one of the survivors on the eve of demobilisation. For another, it is immediately obvious that Private Fred Petch is not a young man: he was, in fact, fifty-one years old. It was Fred’s second war, for he had previously served in South Africa during the Boer War, and you will find his name amongst those on the memorial on the wall of the public library in Old Cross, a memorial unusual in that it commemorates all who served in that war, and not simply those who gave their lives. Fred was forty-seven when he volunteered for service again in the Spring of 1915. His son comments: “Fred liked the Army: as a soldier he felt himself a man, and the Army welcomed him, an experienced soldier”.

His re-enlistment boosted the family income. As cowman for George Quenby at East End Green Farm, his wages were fifteen shillings (75p) a week. His wife now received an allowance of seventeen and six (8 7 1/2p). As she drily remarked, “Half-a-crown a week extra, and one less mouth to feed!”

Although the Petch family had Suffolk origins, Fred was born at Epping Green: Little Barkhamsted. The 1881 census shows the family living in a cottage (since demolished) near the Five Horseshoes at Brickendon Green, and Fred a thirteen-year-old farm labourer. Alice, nee Brothers, his wife-to-be, was Hertford born and ten years his junior. Her father, Joe Brothers, worked for the railway (probably the Great Northern), but when his wife died in childbirth in 1884 he deserted his family and Alice and her siblings were put in the Hertford Union Workhouse in Ware Road. It was in that same workhouse that Joe Brothers ended his own life, many years later, which some might think poetic justice.

Fred and Alice married in May 1905. On 19 March the following year Alice gave birth to twins, a boy and a girl. The girl was stillborn, and the boy, christened George Frederick, was not expected to survive. He is the boy standing next to his father on the right of the photograph, and despite predictions was destined to outlive all the rest of the family, dying at home in December 2002 within three months of his ninety-seventh birthday!

He, too, is in uniform – at any rate, he wears a Hertford Grammar School cap, no doubt at his father’s proud insistence. In 1917 he came second out of twelve candidates for a free place at the school. George always insisted that Mr Spikesman, the then headmaster of the Cowper endowed school at Birch Green, was a sadist, but he doesn’t seem to have suffered thereby! He left school at sixteen, going to work for local builders Barnes and Avis, later moving to London as an accounts clerk. Like his youngest brother, George was a keen sporting cyclist.

Seated in front of him is brother Edward, two years his junior. Ted was no scholar, but was good with his hands. He became a carpenter, married and moved to Surrey, but did not make old bones, dying during the nineteen-fifties.

The little lad in front is three-year-old William James, born on 3 March 1916. Bill was a farm worker for most of his working life, on farms in at least ten different counties: what he didn’t know about farming at the end of it was hardly worth knowing. He was my very good friend for nearly forty years. Latterly living at Woodley near Reading, he died in July 2001 aged eighty-five. I still miss our long telephone chats.

There should have been a fourth boy in the picture. Cyril Petch had arrived in 1914, but succumbed to whooping cough six months later.

Neither of the Petch homes at Birch Green survive today. Both were tied cottages at the Letty Green end of the village. The first, 9 Birch Green, was a timber-framed, quarter weather-boarded lath-and-plaster bungalow with a tiled roof. Damaged in the Second World War, it was abandoned and left to fall down. In 1919 the family moved to No.5, a two-storey semi-detached cottage of similar construction to the bungalow, but with a slate roof.

Neither had water laid on; No.5 had a well in the front garden but the water wasn’t fit to drink. In both cases, drinking water had to be fetched from a standpipe sixty yards away. Lighting was by paraffin lamps or candles, although gas was laid on to No.5 about 1930. Sanitation was primitive, outdoor bucket privies. Some of the floors in the bungalow were bricks laid directly on the soil. Even as late as 1930, there was no refuse collection. Such were living conditions only a score of miles from central London less than a century ago,