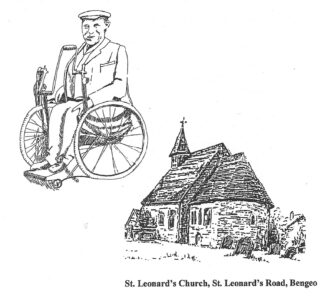 Gerard Gosselin was the grandson of Admiral Gosselin of Bengeo Hall.

When he was a child, he had fallen out of a window at Bengeo Hall: a year after this accident, he had suffered from rheumatic fever. The two misfortunes had left him physically damaged and he was unable to walk. He had to propel himself around in an “invalid tricycle”. His three brothers were educated at Eton: Martin, the eldest, became a diplomat; Helier became a lawyer, (and also served as mayor of Hertford for several terms of office); Bertrand became an officer in the army. Because of his disability, Gerard could not go away to school and was educated by private tutors. He lived at Bengeo Hall with his two aunts and also spent time at his mother’s London home in Kensington. In the census of 1881, when he was 26, his occupation is described as “gentleman”: in 1891, he is described as “living on own means”.

He was very interested in aspects of practical technology and he spent a good deal of time in a workshop that was set up for him at Bengeo Hall. He became very concerned about the ruinous state of St. Leonard’s Church. It is situated a short distance from Bengeo Hall and it was where his grandfather and father were buried.

A new church had been built in Bengeo in 1855: Holy Trinity. People had lost interest in the maintenance of the little old church, which dates from Norman times, (if not earlier). The folk of Bengeo assumed that their despised old church would be demolished. The locks on the doors were broken and people were using the old church as a source of useful items: building stone, timber etc. Birds were flying to and fro through the broken windows and animals were grazing in the churchyard.

In the 1880’s, a group of people, led by the Rector formed a committee with the aim of rescuing the old church from ruin. Gerard Gosselin was the secretary of the committee and also the overseer of the works that took place every summer for the next six years.

He was the ideal man for the job. He lived very near the old church; he had a great interest and knowledge of practical work; he had contacts in London and in Bengeo; he had money of his own to put into the project and financial help from his aunts with whom he lived at Bengeo Hall.

A London architect, Mr. Micklethwaite, was consulted; a local firm, Ekins, (still in existence today) was contracted to do the work. Captain Parker of Ware Park provided gravel and Mr. Palmer, the farmer from Revels Hall provided workmen, transport and the water supply. Mr. Robert Abel Smith of Goldings was a generous benefactor, along with members of the Longmore family of Hertford. Other supporters also backed the building fund with more modest donations.

The little book which records the proceedings of the restoration committee and the progress of the work is kept at HALS*. It was written by Gerard. On reading it, I sensed his great determination and enthusiasm for the project. By 1889, the building had been made safe and sound. There must have been the destruction of many of these ancient village churches in Victorian times. That the people of Bengeo inherited an architectural ” gem” instead of a few fragments of an ancient ruin is due to the unswerving commitment of Mr. Gerard Gosselin.

He married twice, but did not have any children. He moved from Bengeo to Hindringham in Norfolk in 1900. There, he undertook the restoration of the moated Elizabethan manor in which he lived.

In character, Gerard must have resembled his grandfather, the admiral. Both were capable of overcoming difficulties and setbacks in order to achieve their ambitions. His brothers predeceased him: Gerard was also like in grandfather in that they each enjoyed good health and lived until they were over 90 years of age!

St. Leonard’s Church is open to visitors in the afternoons of the weekends of the summer months.

Services are held there at various times of the year. The church is under the direction of the Rector of Holy Trinity Bengeo.