DIVERTING THE TURNPIKE ROAD AT GOLDINGS, 1868 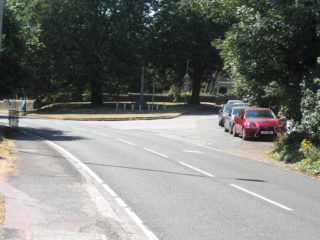 The beginning of the diversion at Waterford with A119 (previously A602) to the left and Goldings Lane to the right, 2018
Geoff Cordingley 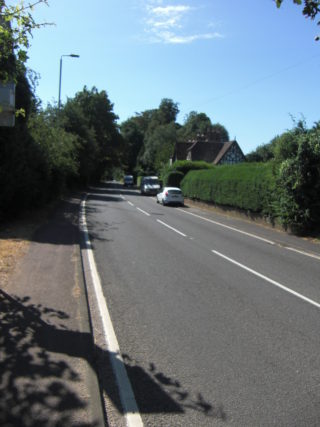 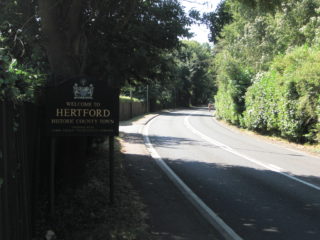 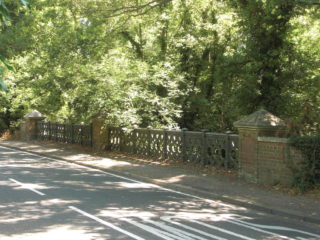 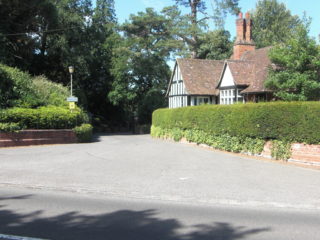 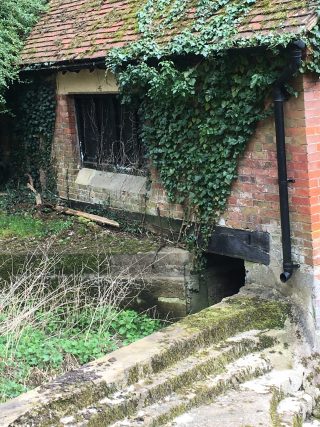 The back of the mill in 2021 showing where water entered the mill to drive the wheel and a second hole which would have taken overflow water.
Geoff Cordingley 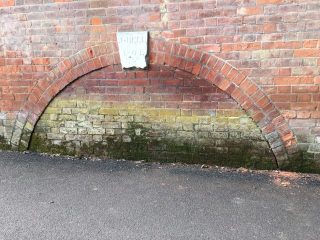 The bricked up exit for the mill race
Geoff Cordingley 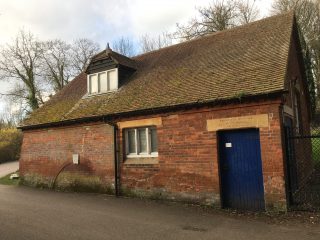 The old mill converted into a water works. The exit for water from the mill on the left hand side has been bricked up.
Geoff Cordingley 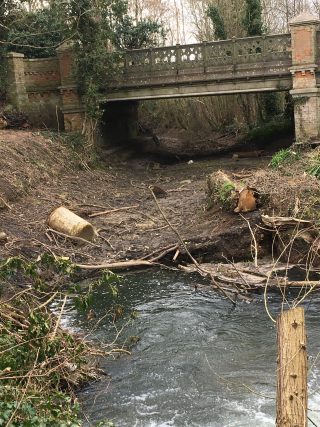 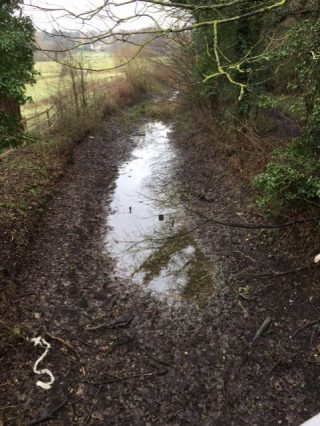 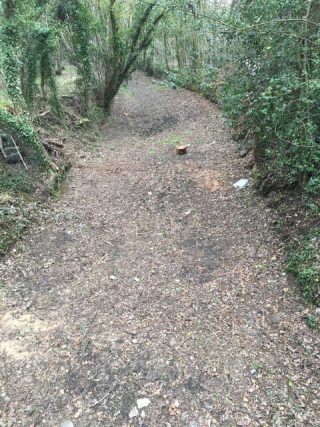 Richard Lavender, as well as being a bridge expert, researched widely, covering subjects such as the Whitechapel Bell Foundry, Caleb Hitch the Younger of Ware, Brickmaker, Hertford & Ware Workhouses, and May Savidge of Ware and Wells-next-the-Sea, to name but a few. Here is reproduced one of his contributions to Newsletter No. 8 (AutumnlWinter, 1982).

DIVERTING THE TURNPIKE ROAD AT GOLDINGS, 1868.

As work is currently being done on re-decking the Horseshoe Falls bridge on the A6021 road north of Hertford, I thought it would be of interest to relate the history of the diversion of the old tumpike road away from Goldings.

The route of the original road (part of the Watton Trust) went along part of GoIdings Lane and then followed the track at the bottom of what is now the car park of the Eastem Divisional Office of Hertfordshire County Highways, (the track now leads only to Broad Oak End and the Bramfield Road) passing the old  Goldings Mansion now no longer there, and across the meadow adjacent to the Goldings Canal, until it joined the surviving route of the North Road just north of the present junction with Bramfield Road. This meant that there were no bridges on the turnpike road through Goldings.

Early in 1867 Robert Smith2 of Goldings had plans drawn up by R.C. Driver of Whitehall, London, to divert the road, at his own expense, further from the Mansion. This diversion entailed the construction of a new road, 4,797 feet long (0.909 miles) with a width of 33 feet, with three bridges and three culverts. A cutting had also to be made through Molewood to accommodate the road. The Horseshoe Falls bridge was a two-span structure crossing both the River Beane and the mill race stream. Concurrently with the construction of the new road, the present Goldings Estate access road was built, with a further three bridges and a flood relief culvert.

The Turnpike Trustees held meetings in August and October 1867 at the Salisbury Arms, Hertford, to discuss the proposed new road being financed by Robert Smith and on 6 November 1867 at 12 noon at the Saracen’s Head, Ware, the Sheriff of Hertford chaired a meeting to award compensation to the affected landowners near Goldings.

The successful contractor was James Clarke of Thornton Heath, Surrey, whose tender price of £6259 for nearly a mile of road and six structures was accepted on12 May 1868.  The cost of the Goldings Estate road and structures is not known.  I imagine that the present day price for the same length of road plus structures would be well over £1,000,000!  The contract period for the diversion was from the summer of 1868 to September 1869.

The owner of Molewood Mill, a Mr. Walters, had previously agreed to lower the mill race to assist the bridgeworks for the sum of £4 a day, provided adequate notice was given by the contractor.  Unfortunately the latter drove some piling into the mill race to hold up a bank slip and in doing so partially obstructed the flow of water.  Shortly after this, in November 1868, Walters opened the sluice and flooded the works while vital bridge foundation work was being undertaken.  The contractor must have made his peace with Walters as no more intentional flooding is recorded.

The second incident concerned the contractor, Clarke. It appears that in January 1869 he was experiencing financial problems and Robert Smith’s solicitor began proceedings to impound plant and materials, the main plant being 24 work horses! Clarke seems to have overcome his difficulties, for on 23 September 1869 the new road was ‘thrown open to the public’, the old road stopped off on 13 April 1870.  The then County Surveyor, Thomas Smith3, accepted adoption of the bridges on behalf of the Justices on 18 October 1869.  The maintenance of the road remained with the Turnpike Trustees until the Trust was abolished in November 1875.

In August 1979 divers carrying out the routine six-yearly inspection discovered extensive scouring to the foundations of Goldings Estate middle bridge.  As a consequence urgent repairs were undertaken and in September of that year a diversion channel was dug through the water meadow to divert the flow of the River Beane into the Goldings Canal.  When damming and pumping work had been completed, it was found that the foundations of the bridge had been undercut by no less than six feet!