A WALK AROUND VICTORIAN WARE

DAVlD PERMAN was also a regular contributor. The following article appeared in Newsletter No. 4 ( Autumn 1980)

I have just been taken on a fascinating tour of Ware as it was 129 years ago. My guide was unrivalled in his ability and authority to seek information about the town. There was just one drawback about the tour and that was that, despite hearing the names of all the people I met, I did not have the slightest visual clue to Victorian Ware. But I had better not carry the mystery any further: what I was doing, of course, was reading about Ware in the Census of 1851 at the Public Records Office in London.

Censuses seem to be used more by genealogists than local historians. Certainly, during my visits to the Census Search Room on a day-ticket, there have been many more Australians and others looking for a particular reference than browsing through a whole volume. But the local historians within reach of London had better move quickly. As part of Government economy measures, the Census Search Room is soon to be moved from Portugal Street, near Chancery Lane, out to Kew and the staff at Portugal Street say that there are to be cuts in staff, which means fewer people on hand to find the correct microfilm out of thousands for the Censuses between 1841 and 1871 (and soon to be joined by that for 1881).

But to return to my tour of East Herts, 129 years ago. Ware in those days was a busy township at the heart of a large parish of 5,088 people. In population it had recently been overtaken by Bishop’s Stortford, although Hertford (with its three parishes of St. John, St. Andrew and All Saints) stayed comfortably ahead of both rivals in population, even without counting the inhabitants of fast-growing Bengeo. Yet, oddly enough, Ware boasted a larger number of houses than either Hertford or Bishop’s Stortford. And of course a sizeable part of Ware as we know it today, and a very populous part at that time, was in the Parish of Great Amwell. 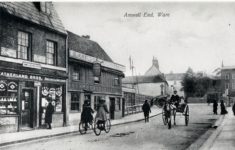 Amwell End – looking towards the railway

I had gone to the 1851 Census for two reasons. One was in answer to a request from a librarian in Berkhamsted for information about an Inspector of Police, one Edward Samuel Evans, whom I found alive and well and living with his family and guests in Amwell End. My other motive was to find out the names of the inns in Ware High Street which were functioning at that time and in this I was frustrated. Although some public houses away from the High Street were identified – the Angel, the Cock, the Magpie – the Census enumerator had steadfastly ignored the High Street inn signs. Perhaps there were too many of them.

What was fully revealed, however, was the social fabric of Victorian Ware. 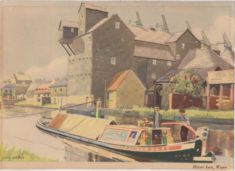 The town was overwhelmingly artisan (one might say ‘Working-class’ but that would be an anachronism). Bargemen were to Ware then what lorry drivers are today and the commonest description for occupation was ‘labourer’, particularly in many yards, alleys and byways near the bridge and the river. Other numerous groups were ‘annuitants’, as well as almswomen, paupers and people on parish relief. The Ware Union Workhouse (now Western House) had 127 inmates, looked after by a matron, two assistants and a schoolmaster and schoolmistress. The National School was in Steeple End, the western end of what is now Church Street, the other end at the time being known as Dead Lane. (Incidentally what splendidly evocative street names there were then – Red Cow Yard and Omega Place, both off Crib Street, Magpye Corner, Monkey Row, Sams Yard, Horn Court and Caroline Court, where lived a certain Harriet Riley, “Hawker with a basket”.

Another school was being run by the two Misses Metcalf in Place House, thus continuing the tradition of the Bluecoat School.

Higher up the social scale, the citizens of Ware were more expansive about the information they gave to the census. In Upper Land Row there lived a lady who described herself as “drawing mistress {private)”. Names still common in Ware abounded: Henry Page, miller and maltster, employing 30 men; Charles Wells, assistant ironmonger; Richard Hanbury who, although he lived at Poles in the neighbouring parish of Thundridge still kept a lodge-keeper in Ware. At Ware Park, the house which in 1774 Thomas Hope Byde had built on the site of the old Fanshawe mansion, there lived William Parker, “magistrate, barrister and landed proprietor”, who had eight servants. At Thunder Hall lived a retired East India captain and at the nearby Ware Vicarage, presumably on a site somewhere near Charvill’s Garage, there lived the Revd. Joseph William Blakesley, BD. with his family and six servants. Mr. Blakesley, who had arrived in Ware in 1845 and was later to become Dean of Lincoln, was the vicar responsible for the far-reaching restoration of 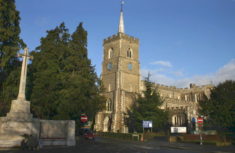 St. Mary’s Church in 1849. According to Edith Hunt, he was also a special reformer, stirring up the authorities to do something about the slums of Ware. But was he also, I wonder the Puseyite vicar, to whom Mrs. Hunt refers, who wore a surplice and turned eastwards to say the Creed, thus offending the Evangelical third of the congregation who left St. Mary’s to worship first at the Town Hall and later at Christ Church? Dorothy Palmer in her recent “History and Guide to St. Mary’s Church Ware” says that the vicar who offended the Evangelicals was Mr. Blakesley’s predecessor, Henry Coddington. But Mr. Coddington arrived in Ware in 1832, before the Oxford Movement had really begun. So here is a small mystery. Can any other local historian help?

But let me finish on a more homely note. Clearly one problem that exercised the Victorian upper classes was that of spinster sisters with social pretentions. The Reverend Mr. Blakesley, who was fifteen years older than his wife, had a sister, six years older still, living with him. In the Census she described herself as a “proprietor of railroads”.

Ware Priory – from the river

Down the street at the Priory, life must have been even more tense. The occupant was a Mr. Martin H. Gosselin, born in Bengeo, and living with him was not only his spinster sister but his wife’ spinster sister, also. What is more, each of the ladies described herself as an “admiral’s daughter”. Now, there’s a subject for future research!  Duly done by Gill Cordingley (Ed.) Courtesy of Hertford Museum Ware