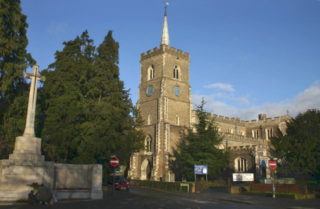 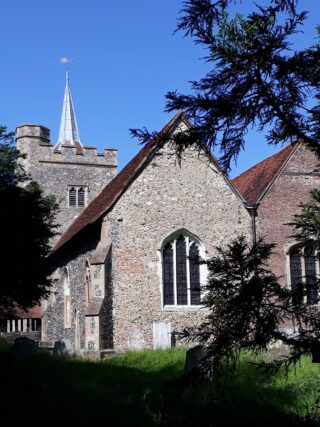 Architectural historian Nikolaus Pevsner defines a ‘Hertfordshire Spike’ or fleche, as a short spire rising from a church-tower, surrounded by a parapet.

As the name suggests, they are common in Hertfordshire, although they can be found in other counties. Our local geology leads to a lack of good building stone so spires were often constructed of a timber framework covered with tiles, lead or copper.

An alternative origin of the Hertfordshire Spike comes from folklore. It says that when Christians first looked for land to build churches in Hertfordshire, the Devil claimed ownership of all the best locations. After some negotiation both parties agreed that churches could be built but that they would not have steeples. The Devil believed that he would be able to enter the church through the tower and leave it by the north door. However, the cunning architects topped their towers with spikes, so that he would be impaled if he attempted entry.

There are a number of original Hertfordshire Spikes in our area:

It is thought that there has been a church in Ware for over a thousand years. Once a French-owned Benedictine Priory, St Mary the Virgin was rebuilt in the late 14th century by the family of Joan of Kent, the widow of the Black Prince and mother of King Richard II. The tower, which climbs up in five stages is finished with its spike, behind an embattled parapet. This and later work by another aristocratic patron, Margaret Beaufort, Countess of Richmond, has made St Mary a fine example of church architecture with a grade I listing.

Further downstream, where the River Lea joins the River Stort, the Church of St James sits on high ground. Originally built in the 12th century, its embattled buttressed tower came along in the 15th century. Its leaded spike is tiled on its lower slopes. The church is recognised as an outstanding example of medieval church architecture, having avoided later restoration. St James is listed as grade I and in the care of the Churches Conservation Trust, a national charity saving historic churches at risk.

The Church of St Mary in Hertingfordbury dates from the 13th century, but the tower came 200 years later. The original slim spike was widened during the restoration carried out by the Earl Cowper in 1890-91. This spike is covered in copper.

The tradition of the Hertfordshire Spike has not been entirely forgotten since the medieval period. William Robert Baker of Bayfordbury, had the parish church re-built in 1870-71 in the Early English Style. This steeply pitched roof has a lead covered fleche, reminiscent of a spike. Similarly, Holy Trinity in Hertford Heath, was built in 1863, in the same style. It’s steep, red tiled roof has a square slender timber fleche, clad in shingles.