A drawing of the school building in Church Street 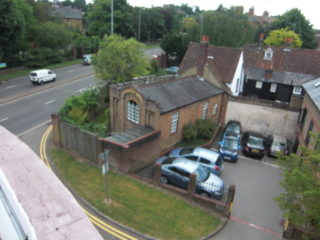 Part of this building blocked in by Gascoyne Way, the multi-storey car park and other housing was the School building in Church Street

The remains of the school have been incorporated into a house 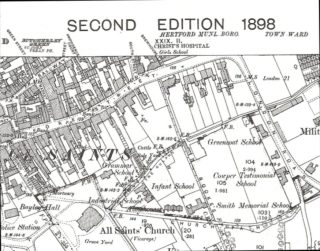 In 1760 Gabriel Newton, a wealthy  man with no children, who was also an Alderman of Leicester, made over much of his property to Leicester City Corporation.  The money was to be used to fund nine schools for the education of Church of England boys.  The schools were to be in Leicester, Ashby-de-la-Zouche, Earl Shilton (Leicestershire), Northampton, St. Neots, Huntingdon, Bedford, Buckingham and, perhaps most surprisingly of all, Hertford.

The money provided a uniform of a green coat, breeches, shirt, cap, stockings and boots for each child.

A master was appointed to teach the boys reading, writing and arithmetic and they were trained to take part in church services.

The children were to be children of poor families who had been baptised in Church of England faith.

The Green Coat School was to have 25 pupils and Leicester City Corporation paid £26 annually.

In the early days the school was managed by 16 trustees.

The school started in Pegs Lane (a building rented from Mrs Smith) but moved to a new building near All Saints Church in 1812. (This is the one in the photographs.) The cost of this building was met by contributions from public benefactors who for a donation of a guinea were entitled to nominate a pupil to attend the school.  This building was meant to house 50 boys.

By the 1860s this building was too small and the children moved to a new building in London Road.

Green Coat School lasted until public elementary schools became totally Government funded.  Since only boys whose parents were members of the Church of England qualified to be taught at the school, Green Coates School did not qualify for state funding.  Thus the number of boys attending decreased until the school finally closed in 1894.

The building was still used at other times, e.g. during the 1920s & 30’s Mr. Sharp held woodwork lessons for boys from Cowper School here.  In October 1940 after Longmore & All Saints’ Infant’ School were damaged by bombs, two classes of the infants’ school were taught in this building until late February, 1941 although on HMI’s recommendation one class stayed here until the summer.

The money is still received from Leicester and the original £26 had grown to almost £3,000 by 2011.  It now goes towards the Newton Education Foundation which according to the Hertfordshire County Council website: Promotes the education (including social and physical training) of persons under the age of 25 years, who are attending or have attended as pupils at any school in the town of Hertford, with a preference for such persons who are members of the Church of England.

The text above is based upon information in “Educating Hertford: An Account of the Evolution of State Schools in the Town” by Len Green, available from Hertford Museum.