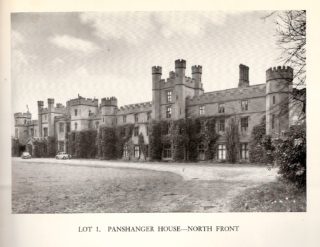 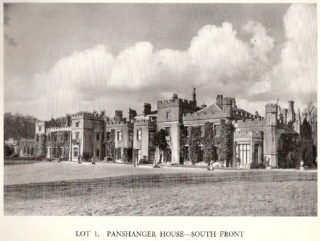 “PANSHANGER HOUSE was bought for £17,750 by Mr. Richard Ashton, a Stoke Newington demolition contractor and scrap merchant, at the public auction of the Panshanger estate at the Corn Exchange, Hertford, on Wednesday.”

At a low reserve to ensure a sale

This well known country residence was erected in the early 19th Century to the design of Humphrey and G. A. Repton3 in brick with plaster facing and with slated roofs.

It is beautifully situated along Parklands commanding wide views to the South over the Mimram Valley only about four hundred and fifty yards from the Welwyn to Hertford road from which it is approached at the Lodge entrance through handsome double iron gates leading to the park drive.

The property is eminently suitable for scholastic, institutional or other similar purposes.

Construction is mainly on two floors but there is an additional floor over certain parts. The principal reception rooms occupy the Eastern end of the house, the remaining part of the ground floor being divided into two parts, one comprising the secondary reception rooms and the other the service quarters. The bedrooms on the first floor follow a similar plan.

ON THE GROUND FLOOR (measurements are approximate only) :

THE BILLIARDS ROOM (North) 38ft. by 16ft. 6in., lined with bookcases; and with an oak floor.   Two fireplaces.

THE PICTURE GALLERY (South) 66ft. by 26ft., approached through the ANTE ROOM (22ft. 6in. by 17ft. 6in.) by a fine marble portal.   It has a bow window and three large lantern lights and the ceiling is richly decorated in plasterwork,   The walls are hung with silk and have many lighting points, and the floor is of oak. Two fireplaces.

THE LIBRARY (South) 37ft. 6in. by 23ft. 3in., with numerous built-in bookcases, fitted mirrors and an oak floor.   Fireplace.

THE ANTE  LIBRARY (South) 28ft. by 17ft. 9in., with communicating doors to the Library and Drawing Room.   There are french windows to the garden, and an oak floor.   Fireplace.

THE WHITE DINING ROOM (South) 36ft. 3in. by 20ft., with bow windows and built-in glass fronted china cupboards.   The ceiling and walls are finely decorated in plasterwork and there is an oak floor. Fireplace.

THE LARGE DINING ROOM (North) 43ft. by 30ft., richly panelled and with carvings in a style resembling that of Grinling Gibbons.    The walls are wired for nine picture lights.   Two fireplaces.

THE DOMESTIC QUARTERS include:

ON FIRST FLOOR (measurements are approximate only) :

THE TAPESTRY BEDROOM, 19ft. by 14ft., with Dressing Room.

TWENTY-THREE SECONDARY AND OTHER BEDROOMS.

ON THE SECOND FLOOR:

Twenty-Eight Staff and other rooms

THE OTHER OUTBUILDINGS include:

23 Secondary and other Bedrooms,

28 Staff and other Bedrooms.

The house is surrounded by formal and landscape gardens with shrubberies, lawns, specimen and other ornamental trees, including the famous Panshanger Oak and a considerable number of fine beech and other timber trees.   About 21 acres of arable land, lying to the North of the House, and the Farm Buildings are let to Mrs. Hay on a verbal yearly agreement at £27 per annum.   A plan showing the approximate area may be seen at the Auctioneers’ Offices.

Electricity is from 220 volt D.C. private supply, served by 2 automatic Lister diesel engines.   The house has been rewired in recent years in steel conduit.   The main electric cable runs along the Hertford–Welwyn road, a distance of about 450 yards from the house.

Mains water.   There is also a pumped river water supply from the Mimram supplying the gardens of the house with overflow to fire tanks.   The Boathouse and pump are included in the sale.

Drainage to Septic Tank.   The Telephone is at present installed.

The Lodge, situated at the North Entrance, is constructed of brick and has two rooms on the ground floor and two on the first floor.    Cellar.    Main water is connected.

Certain items in the nature of Landlords or Tenants fixtures are to be taken at a valuation to be made by the Vendor’s Agents and some of the garden ornaments and gates are excluded from the sale.    Details will be supplied upon application to the Auctioneers.

On 20th October, 1902, the house was included in a list of buildings of special architectural or historic interest under the provisions of Sec. 30 of the Town and Country Planning Act, 1947.

On completion with the exception of about 21 acres and the farm buildings let to Mrs. Hay .