The beauty of Panshanger Park today owes much to the partnership of the Cowper family with two famous landscape designers, Lancelot Brown and Humphry Repton. The result is a Grade II* listed parkland.

Panshanger lies west of Hertford, towards Welwyn Garden City. It covers about 350ha of the Mimram valley. In the south the old Cole Green House was perched on high ground, looking across the river to where the later Panshanger House would stand. Both houses are now demolished.

Lancelot Brown and the Second Earl
William Cowper, the 2nd Earl Cowper (1709-1764), is known to have sought the advice of the fashionable gardener Capability Brown from about 1755 to 1764.

At this time the family seat was Cole Green House. It’s not clear exactly what work was undertaken by Brown, but he is recorded as having ordered new trees, joining the sweet chestnuts and oaks already thriving in the park. He may also have been responsible for the design of a ha-ha.

The Earl was clearly determined to follow the fashion for improving his park. There was an octagonal walled garden, where pineapples grew in the hothouses. A menagerie came in 1759 and a temple, brought from Lord Albermarle, in 1762. The landscaping moved out from the immediate area of the house to encompass the estate’s agricultural land. Tree-lined avenues created vistas across the Mimram valley.

Humphry Repton and the Fifth Earl
By the time Peter Leopold Nassau Cowper became the 5th Earl Cowper (1778-1837), the gardener of choice was Humphry Repton (1752-1818). Together they plotted out a new design for the park in the Picturesque style. 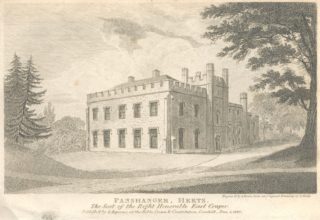 An engraving dated 1810 of Panshanger near Hertingfordbury

Repton’s Red Book shows a uniting of the Panshanger and Cole Green estates, incorporating the avenues of the Brown landscape. The Cole Green House was demolished in 1801/2 and the new Panshanger was built in the following 10 years. The size of the park grew following the enclosure of Hertingfordbury parish and diversion of public rights of way around the park perimeter.

Repton saw the potential in diverting the clear chalk river, allowing a larger lake to form below the house. Called Broad Water, it is crossed by several footbridges, running beside the Riverside Cottage (listed grade II).

The Great Oak of Panshanger
There are about 800 veteran trees in the park, including the renowned Panshanger Oak. It is recorded as the largest “clear-stemmed” (that is, not pollarded) oak in the country. 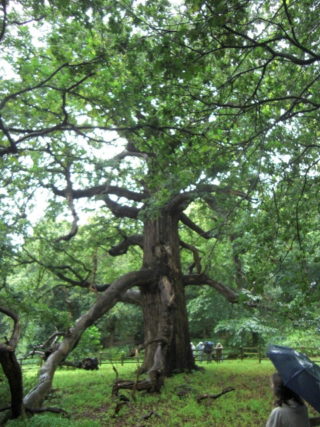 View of the Panshanger Oak

Planted in the second half of the 16th Century, 200 years later it was already a well-known specimen to naturalists. It was recorded in Sylva Britannica, a survey of the country’s trees in the early 19th Century by Jacob George Strutt.

“On looking at an object at once so graceful and so noble, raising its green head to-wards the skies, rejoicing in the sun-shine, and imbibing the breath of Heaven at every pore, we cannot but feel equal wonder and admiration when we consider the tininess of its origin, the slender-ness of its infant state, and the daily unfolding powers of its imperceptible, yet rapid, progress.” From Sylva Britannica.

Later it was visited by Queen Victoria, Queen Elizabeth II and Winston Churchill. Today the oak measures 25 feet (7.6 metres) round its girth.

In more recent times the park has been used for gravel extraction. As this operation slowly winds down, the land has been restored for arable farming and valuable wildlife habitats. It opened to the public in 2014 as a country park and nature reserve. Now the Herts and Middlesex Wildlife Trust works with Tarmac and the County Council to manage the park for both people and wildlife.