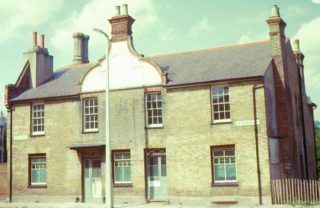 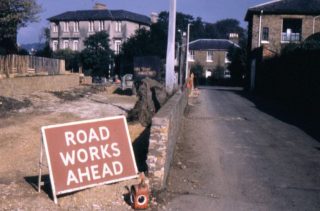 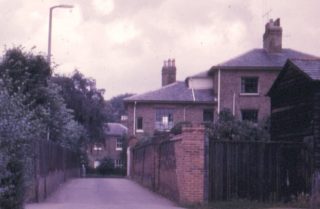 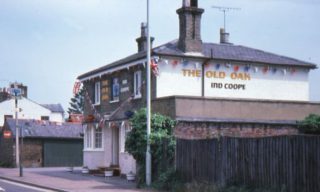 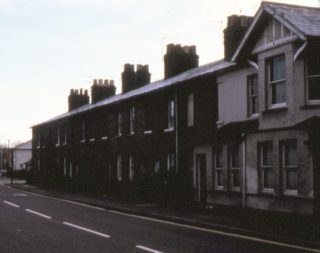 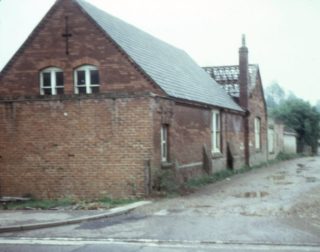 The first section of the Hertford Inner Relief Road covers the Hertingfordbury Road from the railway bridge just outside Hertford North Station, passed the junction with Cross Lane and as far as the Ebenezer Baptist Church. It also incorporates the extension of the North Road, which in certain documents is referred to as North Crescent. The following information has been gleaned from the archives at County Hall, Hertford. In general, the buildings are dealt with from west east and with odd numbers appearing before their equivalent even numbers. The information about the properties lists the number in the road/street, the owner followed by the tenant (if appropriate), the size of the area of land and finally the compulsory purchase order number.

Railway bridge
The Hertingfordbury Road is classified on maps as a national route known as the A414, joining Hatfield to Hertford in a west-east direction. The smaller of the two railway bridges was dismantled in 1967. This carried the railway line from the Cowbridge Station in the centre of Hertford to Welwyn Junction  via Hertingfordbury and Cole Green. However, this service became a victim of the ‘Beeching Axe’ in 1966. The remaining tunnel-like bridge, which carries today’s commuters to Moorgate, has always acted as a natural throttle for the speed of the traffic travelling towards Hertford. This is because the bridge has a single arch only over the road. Therefore the traffic has to reduce its speed in order to pass under the railway bridge which was built only to cope with two-way traffic.

Cross Lane
Cross Lane had to be widened on the western side to allow traffic to filter around the one-way system from the Hertingfordbury Road (A414) and North Road (A119) onto the Hertford Inner Relief Road. This required triangular islands to be built as either end of Cross Lane. Traffic approaching from the Stevenage direction passed the Hertford North Station then entered the relief road system.

The Old Oak was the first of many drinking establishments that were casualties of the Hertford Inner Relief Road. Benskin’s was a local brewery that was located in the Hertfordshire town of Watford.

Between The Old Oak public house and the terraced houses was an area of land that was devoted to three businesses; a builder’s yard, and undertaker’s storage facility and a garage. The builder’s yard might have belonged to J.T. Botsford, the funeral premises belonged

The two properties (above) appeared to be owned by the same person.

This section of the Hertingfordbury Road was the road junction with Wareham’s Lane. Each had way leave access to properties leading down towards the River Beane:
* Eastern Electricity Board
* East Generating Board
* Private individual called A.T. Bacon.

On the corner of Wareham’s Lane is a larger plot known as Hertford St Andrew’s School. However, in the archives there is a conflict purposes as to what this property was used for. In some papers it is referred to as a ‘primary school’ whereas other letters it was indicated to be a ‘college of further education’.

Next comes the entrance to Castle-Mead Gardens.

According to the archives the property next to Castle-Mead Gardens could have housed a café.

This property housed a business that fried fish and chips. It was registered in the name De Luca.

This business was a pet shop that went by the name of the ‘County Pet Shop’. It was run by Edna.

A small portion of this plot was needed to allow the carriageway to sweep round into Cross Lane.

A larger portion of this plot was needed to allow the road to sweep round into a Cross Lane. Most of the front garden of this property was acquired by the Hertfordshire County Council to make a smooth curve into a widened Cross Lane.

A number of terraced properties that back onto the properties in North Road (Crescent) remained unaffected. They still exist today.

North Road: Odd numbers
The Stevenage Road is shown on road atlases as a national route; A119. It connects Hertford North Station with Hertford town centre.  Most of the houses in the North Road remained unaffected by the bypass plans apart from the sections that were needed to for part of carriageway that was the Hertford Inner Relief Road.

However, the origin plans for traffic relief in the Hertford area showed an overlay of a Western Link Road that tapped into the North Road, just after the Hertford County Hospital’s Nurses’ Training Centre. This road headed north of the town centre towards Port Vale. However, this route became incompatible once the Bircherley Court scheme was proposed.

A section of the front garden of number 41, North Road was needed to form part of the one-way system around Hertford town centre. Hertfordshire County Council acquired this land in order to make a smooth transition from Cross Lane into North Road.

At the other end of the ‘island’ around the houses and properties there were minor changes where North Road meets the Hertingfordbury Road.

This plot was a vacant lot

The original Ebenezer Strict Baptist Church was positioned centrally between Hertingfordbury Road and North Road. The buildings, including the Chapel House were controlled by the Trustees of The Ebenezer Baptist Chapel. The convergence of major roads; A414 from Hatfield and A119 from Stevenage became a dangerous junction for motor vehicles due to the restricted view.  The picture shows the row of shops, business’ and houses on the southern side of Hertingfordbury Road that were demolished to make way for the Hertford Inner Relief Road. On the right-hand side of the Ebenezer Strict Baptist Church is North Road (Or North Crescent). In 1967 the church was demolished and rebuilt on the north side of the North Road. That in turn was demolished and a collection of contemporary apartments were built.

This drinking establishment situated on the north side of North Road was located at the connection between North Road and St Andrew Street. This site, including the car park, was used to build a replacement chapel for the Ebenezer Strict Baptist Church. In the photograph you can see the street sign for ‘North Road’ on the left-hand side of the building and the street sign for ‘St Andrew Street’ on the right-hand side.

The Church of England in the guise of St Andrew’s Church was the main loser in this section of the Hertford Inner Relief Road. The garden of the St Andrew’s Rectory, which included land to the west of Cross Lane and the south of North Road, was filched by Hertfordshire County Council for the widening of Cross Lane to incorporate it into the one-way system. This was by far the largest plot of land that had to be compulsory purchased in this section of the inner relief road. The photograph shows that the road was widened to twice the original size. The original boundary wall of the garden still has to be removed.

A small part of North Lodge, which once housed the post-war ambiances, was incorporated into the carriage plans for the building of the one-way system.

Many thanks to Peter Ruffles who gave permission to use his extensive collection of photographs of Hertford to illustrate this series of articles. Rumour has it that Peter Ruffles was the first person to travel along the new inner relief road …on his push-bike.

Other sections of the Hertford Inner Relief Road will be described at a later date.