My time at Simson Pimm 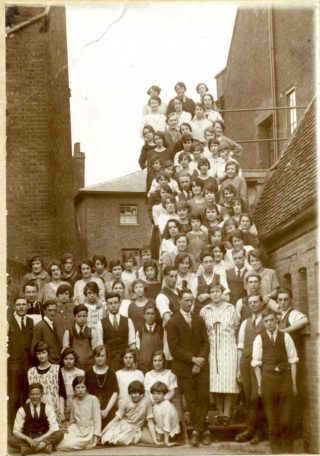 I first started working for Simson Pimm Limited in 1965 as a reel loader & labourer.  My foreman was Mr Walter Hickman known to us all as Wally.  His deputy was Mr Don Spencer.  The company were envelope makers.  Also some printing was done by my mother, Mrs Sybil Powell1 who had her own printing department within the company.  We also had an engineers shop which was run by Mr Ernie Smith from Ware and Mr Ken Whittaker of Hertford.  We had an adjustment team and also a cutting shop.  Here Tuby cut the shape of an envelope in various sizes for our hand feed plate machines.

Mr Norman Rogerson and his team ran the the warehouse where reels from reel feed machines were brought on to the factory floor.

My works manager at the time of going to work for the company which was situated in St Andrew Street in Hertford, was Mr Alf Clee.  After Mr Clee stepped down as works manager Mr Brian Salmons was made works manager holding that position until 1995 when he took early retirement form the company.  Mr Salmons’ temporary replacement was Mr John Steel or Steele.

Simpson Pimm Limited went into receivership that year also and the business was sold to Mr Charles Scott.

Simms Pimm Ltd was run by the Shand family for many years with Mr David Shand managing director of the company.  Before he passed on he handed the managing director’s position to his son Roderick Shand but when the company went into receivership Mr Roderick Shand had to step aside and Mr Charles Scott alongside Mr Philip Chamberlaine or Chamberlain bought the business.

As I understand also the St Andrew St site had to be sold off to clear any outstanding debts the Shand family had, if any at all.  The company under Charles Scott and Philip Chamberlain moved to new premises at Alban Park, Hatfield Road, St Albans, Herts.

Going back to the two managerial changes Simson Pimm had in St Albans Mr Scott retired with ill health I believe and when Mr Scott went Mr Philip Chamberlain followed.

The last person I knew of who took over from Mr Scott and indeed Mr Chamberlain as managing director was a Mr Tony Cheetham who I knew very little about.  After Mr Cheetham departed one other party took over but I am not quite sure who that aprty or parties was, however.  They were the last to run Simson Pimm limited or Simson Pimm Envelopes as it was known when it went to St Albans from Hertford in 1995 and closed as a company in 2000.  Also unsure of closure date.

Mr Ernie Street was Mr Brian Salmon’s under manager in the Company’s Hertford days.  On Mr Street’s retirement Mr Andy Wenzel replaced him as under manager.  Mr Wenzel himself worked in the Simson Pimm offices somewhere before his appointment as Mr Street’s replacement and was also under manager to Mr John Steele at Alban Park.  When Mr Steele went from the company, I am not quite sure if Mr Wenzel was made works manager or not until closure.

But going back to Mr Street, he was promoted from cutting shop supervisor or from the cutting shop to being mr Salmon’s under manager

Simson Pimm also had a waste paper department with various people running that department down the years most noted being Mr George Warner and Mr Peter Manning with Mr Manning taking over from Mr Warner when he retired from the company.

All the reel feed machines and indeed all the hand plate feed machines were all run by female staff within the company and many of the people mentioned are sadly no longer with us today.  I do hope they won’t have minded me mentioning them in writing about Simson Pimm Limited.

Simson Pimm Limited in Hertford is a housing redevelopment today, where the old site once stood.

Note 1: My Mum worked for around fifty years or more for Simson Pimms Ltd then of St Andrew Street in Hertford and also for Simson Shand Limited of Parliament Square in Hertford.  My Mum’s name was Mrs Sybil Powell. She was a trades woman.  I don’t think there are too many trades people of that day and age who were female.  My Mum left us in nineteen eighty seven, I’m sorry to say.